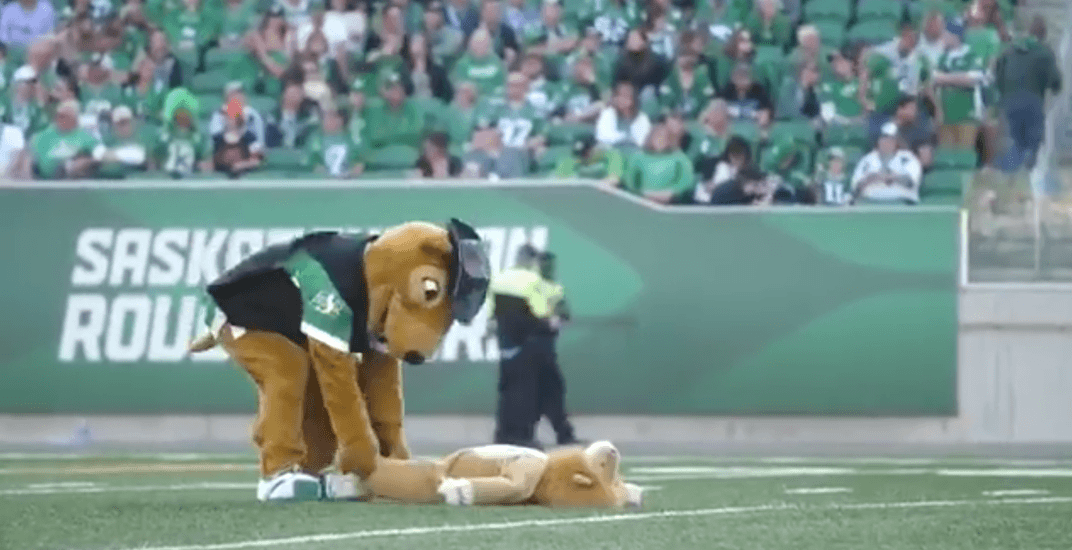 The new Saskatchewan Roughriders mascot was already under fire for being “creepy.”

But Gainer the Gopher took things to a new level on Saturday.

During a home game against the BC Lions at Mosaic Stadium in Regina, Gainer dragged a stuffed lion by the tail and threw it onto the field, before kicking it.

What came next was a little disturbing though.

Gainer spread the stuffed lion’s legs and purposefully grabbed it by the crotch.

The BC Lions called out Gainer on Twitter — tagging the People for the Ethical Treatment of Animals (PETA) – and got plenty of replies from fans.

Even without the contacts.

The incident drew enough attention to cause the Roughriders to release a statement about it.

“We agree that Gainer took it too far during Saturday’s game against BC Lions,” the Riders said. “We’ve talked to Gainer about it and taken away his stuffed lion.”

A new slimmed-down version of Gainer the Gopher, who has been the Riders’ mascot since 1977, was unveiled this season. The new mascot also has a more animated expression on its face, which was the original reason why fans said it was creepy.

We’ll see if Leo the Lion has any kind of response on Saturday, as the Lions host the Roughriders at BC Place. Saturday’s game will also feature a beefed-up 50/50 prize, as the Lions announced the jackpot has a guaranteed jackpot starting at $100,000, which is already over three times more than their last home game.