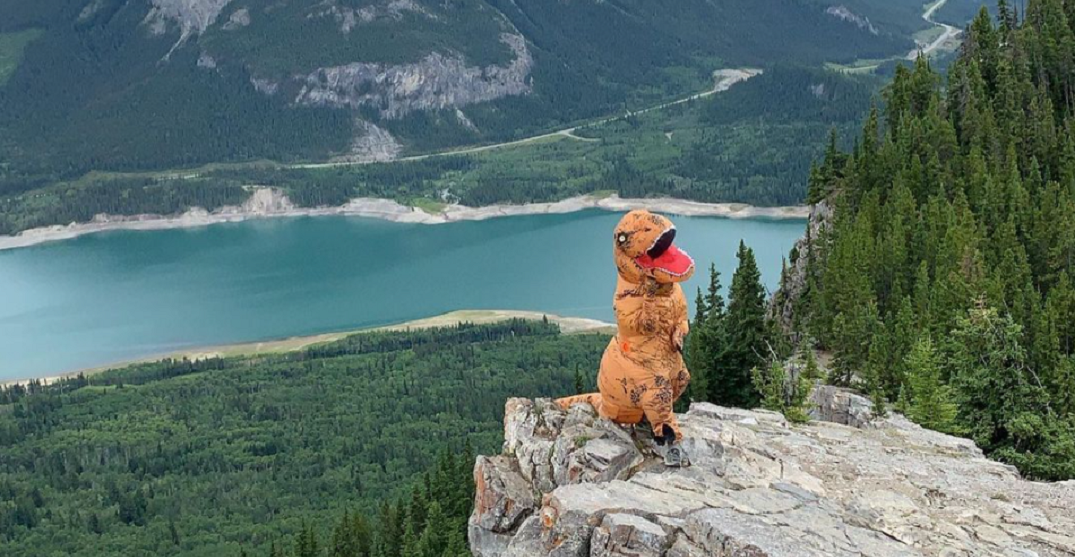 If you happen to see a brown T-Rex t-rekking its way through the wilds of the Rocky Mountains, don’t freak out.

Pastores initially began bringing his dinosaur costume along with him on hikes as a prank on his friends, given Alberta’s proximity to dinosaurs in Drumheller, “but also at the same time it’s fun to make everyone around you happy,” he said in an Instagram message to Daily Hive.

“We went to Opal Ridge and I started to suit up in the false summit, then as my friends were laughing and telling me to start throwing snowballs at them another group emerged and started laughing and giving positive comments, which gave me this surge of happiness to make it a thing and start bringing my suit on a regular basis.”

Pastores decided to create the Instagram page @dinopeaks to document his Jurassic journeys, and has used the page to support local charities as well as to encourage people, especially kids, to get out into nature.

“I struggle with anxiety and depression,” he said, “so I use these moments to make others around me happy instead of letting my issue take over.”

This year Pastores is aiming to help bring funds into the Calgary Foodbank after running previous fundraisers for Kids Care Cancer and Make a Wish Canada.

He hopes to eventually make a children’s book featuring his adventures that will inspire others to become educated about, and enjoy, Canada’s national parks.

He also noted that, for dinosaurs, the cooler months are the preferable time to hike.

“Usually during summer it’s hard to wear the suit as it gets really hot, but during the winter I love the insulation!”

Pastores’ dinosaur adventures can be found on Instagram at @dinopeaks, and those hoping to donate to the Calgary Food bank can do so on his GoFundMe page.