Monday, March 16 will mark a day in Vancouver’s history that may live on in infamy. It is a night that three friends never thought would happen but have no choice but to give the people what they want. The nightly event where men and women battle in a bracket style tournament to determine a champion has gained enormous popularity across the city. The game is Rock, Paper, Scissors and the stage is set by Vancouver’s very own Jolly Brain Productions.

If you haven’t heard of one of these weekly tournaments, there is a good chance one of your friends have. The event has seen nearly 8,000 people hit the stage since its inception in 2011. That’s over one per cent of Vancouver’s total population, and nearly 25 per cent of Kitsilano’s population.

Established in 2011 at Corduroy Restaurant (1943 Cornwall) after co-founders Brian Fredericks and Joel Fortin approached the bar manager with an event idea. Together the three came up with a tournament for Monday nights. With host Scott Patey (local comedian and regular stage performer at Vancouver Theatre Sports) “refereeing” the event, the stage was set for what would later become one of the city’s most epic events. Corduroy’s 45-seat establishment has sold out almost every Monday for the last 198 straight weeks. 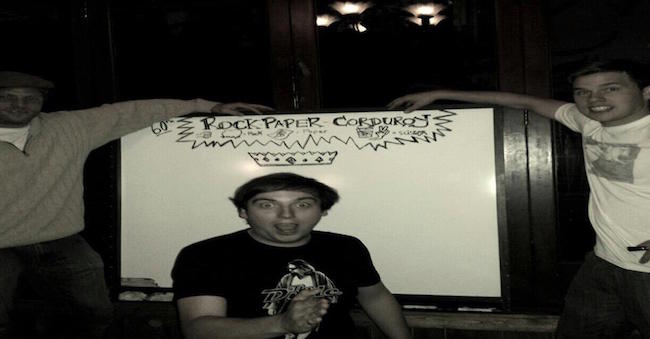 As they approach their upcoming 200th show, the crew are stunned by the event’s success. In 2014, the show expanded to two additional locations making it the only show of its kind in the city. On Tuesdays, the show is performed live in the Beaver lounge at Samesun Backpackers Hostel at 1018 Granville Street, and Thursdays are held at Tavern at the New Oxford (1141 Hamilton Street).

Corduroy is mainly hosted by Scott Patey, while Samesun and Tavern are hosted by Ed Witzke and (newly added) Brian Cook. Each host has an assistant and the event is well rehearsed. Audience participation is highly recommended and playing phone games while in the crowd could get you called out. Fan favourites like Nick Bertoia are always in the crowd supporting the event.