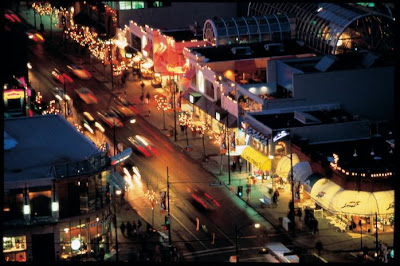 Robson Street, Vancouver’s designated shopping and people watching street has the 3rd highest rents in the country at $196 (U.S.) a square foot. Over the past year rents went down 16% due to the recent economic slide. Only Toronto’s Bloor Street and Montreal’s Saint Catherine Street have higher rents. On a global scale that puts Robson Street at 51st place.
Just to put things into perspective, space along the Champs Élysées in Paris came in as the most expensive at $1,255.90 a square foot. NYC’s Fifth Avenue, Hong Kong’s Russell Street and London’s Bond Street all saw rents higher than $1,100 a square foot. So for premium retailers looking to get their brand out there, Robson Street is a relative bargain.
I still feel Robson Street needs a few new brands to come on board, it’s getting stale. However,  high end shops seem to gravitate towards Alberni and West Hastings and other brands are choosing to locate in Pacific Center (Apple, Bench, Michael Kors etc…).