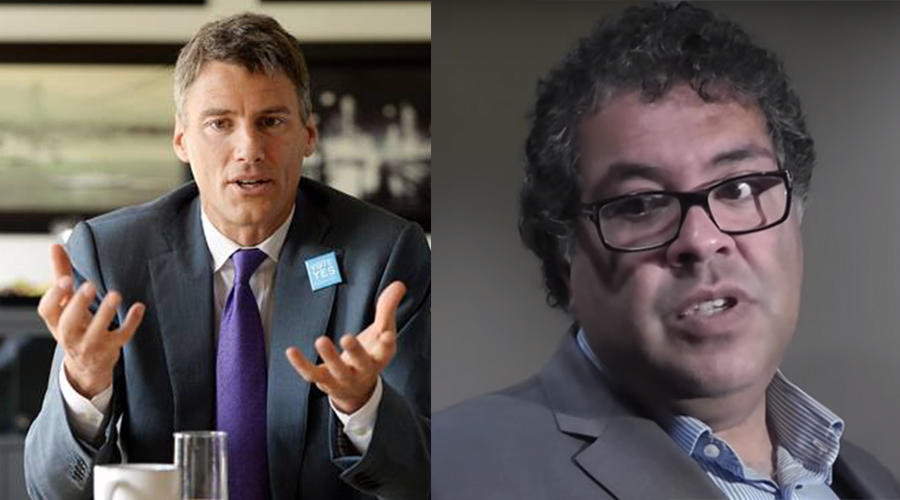 “We’re still best buddies, but you’re allowed to disagree with people on things,” Nenshi told a press scrum on Tuesday. “He talks about hundreds of thousands of jobs being at risk, which is pretty much all the jobs in Vancouver.”

The National Energy Board recommended Trudeau approve the expansion last month, but Robertson has called the NEB’s regulatory process “flawed and biased” after failing to consult communities along the pipeline route.

Above all else, Robertson says a pipeline expansion would hurt Vancouver’s green economy.

“Our green, clean, sustainable brand, valued at $31 billion, could suffer up to $3 billion in damage, on top of risking hundreds of thousands of jobs dependent on our ocean-based and green economy,” reads his letter.

In addition, Robertson says the extra traffic of oil tankers in the Burrard Inlet – it would increase seven fold – is potentially dangerous to Vancouver’s ecosystem.

In response, Nenshi says dangerous materials pass through the waters of Vancouver on a daily basis.

“I wonder if [Robertson] is forgetting that the Port of Vancouver is the third largest port in North America and every single day it transports caustic soda, ethylene glycol, sulphur, coal, sugar. What happens if there’s a sugar spill? That’s probably not very good for the wildlife.” says Nenshi, adding he was being facetious.

Beyond that, Nenshi believes the regulatory process laid out by the NEB wasn’t flawed, and that they’re doing their due diligence.