Gas is cheap. The open road beckons. It’s time to start plotting your next adventure. Where will you go? How will you roll? We turn to our favourite road trip movies for inspiration. 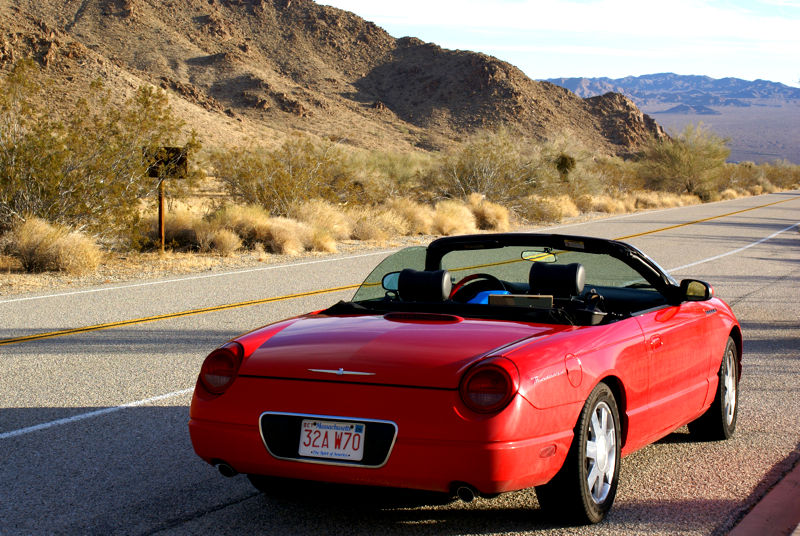 Director: Dennis Hopper
Peter Fonda, Dennis Hopper and Jack Nicholson stoke our inner rebel and our inner sellout in this iconic motorcycle film that symbolizes the search for freedom in corrupt, conformist America. If you can’t remember exactly what it’s about, you’re not alone. Henry Fonda (Peter’s dad) felt the same way after he saw it. But he knew it was going to make millions and take the Academy by storm.

Director: Ridley Scott
Susan Sarandon and Geena Davis play a waitress and a housewife on a “female buddy road trip” in a ’66 Thunderbird convertible until Sarandon’s character shoots a would-be rapist and they become outlaws.

Praised by feminists for its truthfulness, and known to make audiences weep with its unforgettable finish, Thelma & Louise was nominated for six Academy Awards. Female screenwriter Callie Khouri took one home for Best Original Screenplay.

This is the one to watch if you’re considering a trip to the Grand Canyon. Fun fact: it also has Brad Pitt’s debut role.

Miles prioritizes the vines; Jack wants to chase last-fling booty. This is the classic revelation-by-travel flick with unparalleled views of California’s bounty. Bonus: Church excels at playing an obnoxious B-actor. Wonder why…

Director: Terry Gilliam
Fueled by hard core drugs and booze, Johnny Depp and Benicio Del Toro star in the psychedelic road trip quest for the American dream, which happens to be the Mint 400 race in the desert outside Vegas. Their vehicle: a 1971 Chevy Impala convertible they’ve named the Red Shark.

The film is based on the trippy, somewhat autobiographical book of the same name by Hunter S. Thompson. A mind-bending must see (and read) for anyone who fancies themselves left of centre.

Director: Frank Capra
Clark Gable and Claudette Colbert shine in this vintage screwball comedy about an heiress on the run and an out-of-work reporter. The reporter helps out the damsel in distress, joining her on her travels, and inadvertently stumbles on some hot scoop. Their road trip is a combination of bus rides and hitchhiking en route to NYC.

According to Wikipedia, the film was the first to win all five major Academy Awards (Best Picture, Director, Actor, Actress, and Screenplay), a feat that would not be matched until One Flew Over the Cuckoo’s Nest (1975).

Directors: Jonathan Dayton, Valerie Faris
Credited for “putting the fun back in dysfunctional”, this film tells the heart-warming and nutty tale of the Hoover family — father (Greg Kinnear), mother (Toni Collette), grandfather (Alan Arkin), uncle (Steve Carell),  brother (Paul Dano) and sister (Abigail Breslin)  — who squeeze into a VW bus in Albuquerque and aim for Redondo, California. Why? To support the daughter in her attempt to win the Little Miss Sunshine beauty contest.

It makes the list because it joyfully and irreverently breaks the mold in many movie genres: road trips, family movies, comedies, dramas and quests.

Director: Alfonso Cuarón
Another film folks love but often overlooked as a road trip, Y Tu Mamá También tells the coming-of-age tale of two teenage boy on carefree cross-country escapade from Mexico City to the beach with a gorgeous older woman. Of course, the beautiful older woman is keeping a secret that only an epic journey can unlock.

Director: Stanley Donen
On their third road trip from London to the Riviera, architect Mark Wallace (Albert Finney) and his wife, Joanna (Audrey Hepburn) reflect on their ups and downs over 12 years of dating, marriage and parenthood. Although lightly and beautifully acted, the ultimate reason to watch this film is the scenery. It’s ideal for wanderlusters who yearn for the romance of retro Europe.

Director: Larry Charles
Wrong on so many levels it becomes right, Borat tells the story of a reporter (Sacha Baron Cohen) from Kazakhstan who road trips across the United States in order to make a documentary on what makes America so great, and/or to track down actress Pamela Anderson.

Director: John Hughes
Neal Page (Steve Martin) is a marketing exec and control freak. His only goal is get home to his family on Thanksgiving after a freak snowstorm reroutes him to Kansas. Del Griffith (John Candy) is a chatty slob. A perfect foil for Page, he becomes his road trip companion. The comedic set up is straightforward: everything that can go wrong will go wrong. The fellows play the absurdity perfectly. Great for laughs and a look at the American midwest.

There are more awesome road trip movies, for sure. What’s your favourite? Help out by commenting below.