When Einstein and Niels Bohr started debating around the philosophy of science, one concept that almost rocked these two and their bromantic friendship was the quantum revolution. Bohr thought the uncertainty principle was a badass idea. He was stoked to think that the laws of physics operated on what seemed like randomness. Einstein on the other hand, was not digging it. The idea of going through a series of tests for a theory he thought was nonsense was equivalent to being insane, infamously declaring that “insanity is doing the same thing over and over again and expecting different results.”

Turned out Einstein was wrong. The uncertainty principle emerged with all its tested glory, held high like Simba on Pride Rock, and showed that the universe worked in the abstract chaos that Bohr could die in peace thinking about.

Turns out that writing out a blog and taking a developer bootcamp at the same time is highly unrecommended. As the things roll into its fifth week at Lighthouse Labs and the group progresses onto Ruby on Rails, I’m taking some downtime to revise some SQL, ActiveRecord and hang out with the June cohort who have just been introduced to week one. Basically, I’ll be diving into Einstein’s very definition of what insanity looks like, doing things over again and buying myself some time for revision and more writing. But Bohr’s got my back.

While the June cohort gets busy with an intro to Ruby, I get to show you how much gets packed into your brain at Lighthouse Labs in four weeks time. Need a reminder of what day one was like? Check out this visual representation:

Full of bugs. Unreadable hieroglyphics. Apocalypse now. The Expendables 2. So much noob.

I’ve gone from that to kicking some major Ruby ass and building three different apps at the end of four weeks. Gathered around the whiteboard, we yelled out ideas, thought up some ridiculous apps and then went on to select a few of our favourites. Take a look at these babies: 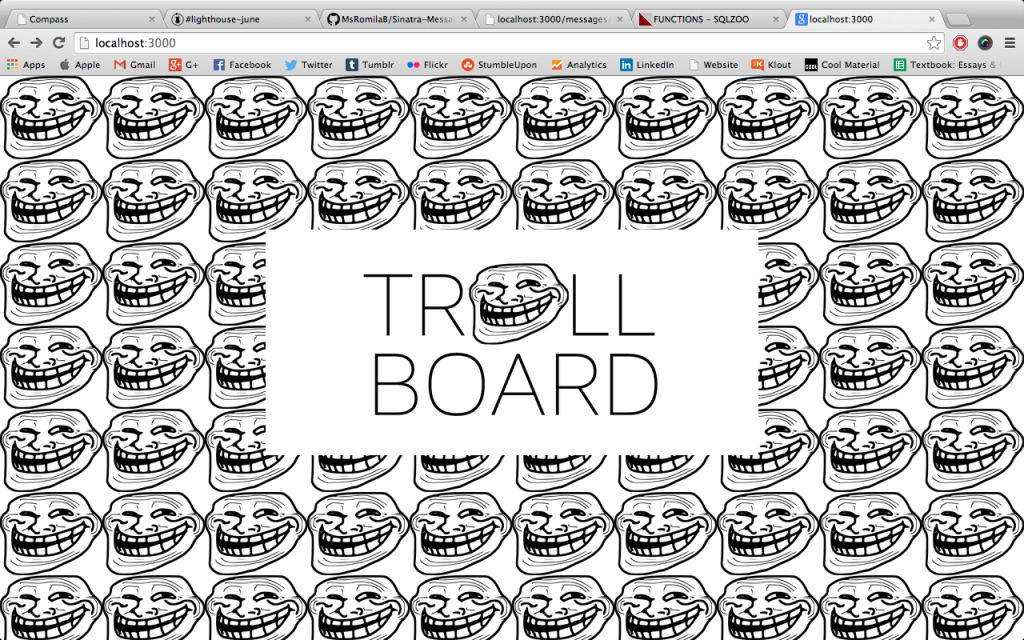 A super basic app that allows anyone – without verification – to post just about anything. Lighthouse Labs Co-Founder, Jeremy Shaki, was super eager about the web app (“Someone could like troll on funeral homes,” he pitched with a delighted grin.)

This is probably a terrible idea and has the potential unleash a direct vortex from the depths of trolling hell, but we’re on the themes of crazy. UNLEASH ALL THE CRAZY. 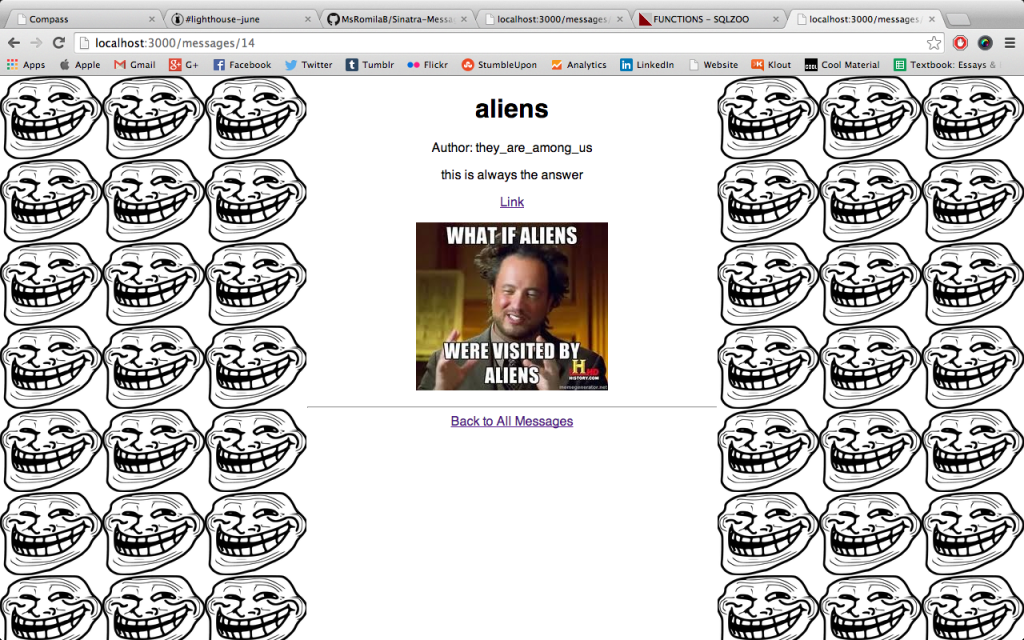 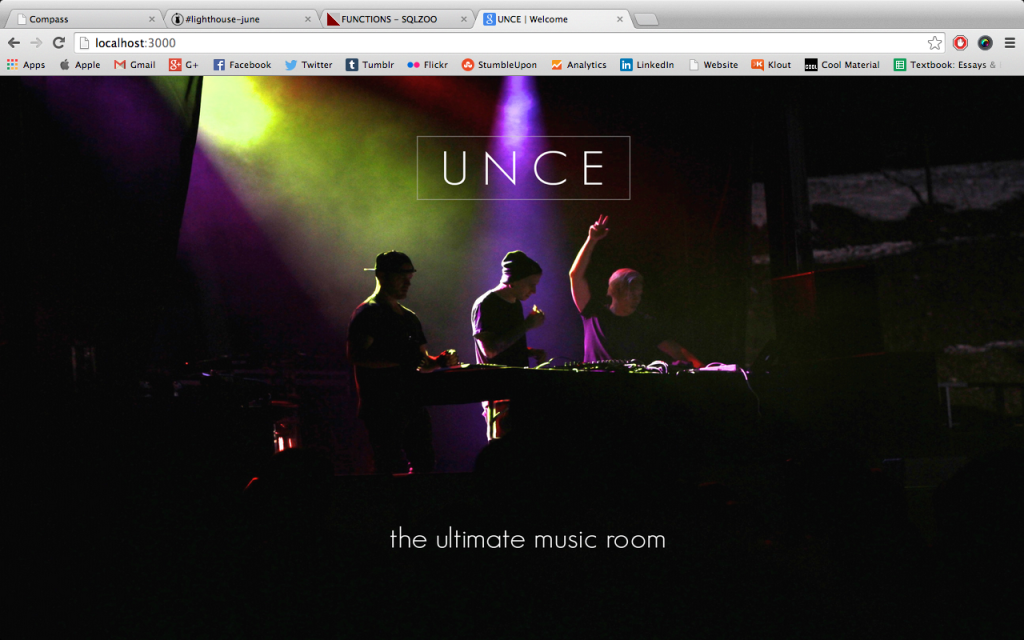 There was a genuine reason why the first app had no user authentication. That’s because building a database to store users was, like, ‘wat?’. By the time I was building UNCE, a music wall app, things got toned down. On top of a public wall, UNCE had the added awesomeness of also having a private wall of that users could save.

A bit prettier too, hey? A few days later we learned Bootstrap, a sick way to create good looking mock-up designs for your site before it hits full production.

The problem with this little prototype is that it can’t yet authenticate that the email actually exists. I could make up a random email like [email protected] and it would accept me as a user. Meaning I should probably do everything in my power Troll Board never finds this app and puts in random non-existent users. 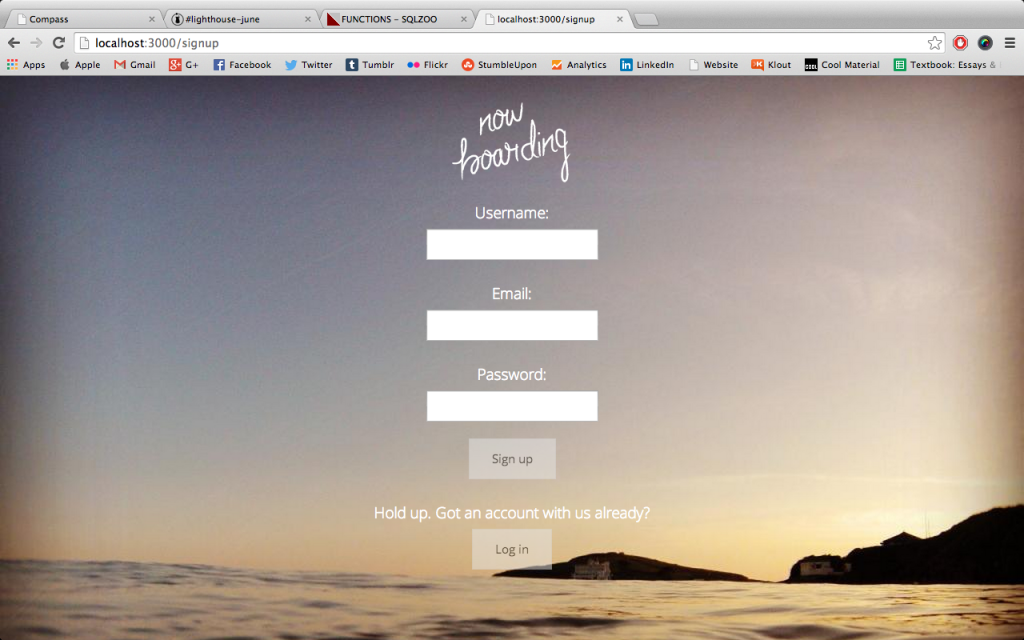 After troubleshooting those trials, I started working on what is my absolute favourite of the three. Now Boarding is a platform idea where users travelling to a location can be paired up with people who have already been there.

This “Tinder for Travel” was an idea where I was the target demographic, so it was pretty sweet to be able to build something I could see myself using. On top of the ‘log in’ and ‘sign up’ pages, the user also has a nifty little profile page. The user can even upload a URL of their profile picture.

That’s the rundown. One cohort has barely taken a step from the starting line, while the other is dreaming in Rails and thinking about co-op placements. I’m stoked to follow these stories for another eight weeks

See you next week, where projects get enhanced, Rails get explored, Ruby takes a back burner for Javascript and we discover the difference between the Founder and the Entrepreneur.