Written by Chris & Melissa Bruntlett, the co-founders of Modacity.

Vancouver bike culture is changing. Fast. And a big part of that shift can be seen in the type of bicycles people are choosing to ride. Freight bicycles, or as they are more commonly known – cargo bikes – come in all different shapes and sizes, but their function remains the same: to transport a load (sentient or otherwise) larger than is practical on an ordinary bicycle. And while they have become increasingly common on our streets, we have every reason to believe this represents the tip of the iceberg, and that conditions on the ground in Vancouver are ripe for a cargo bike revolution. 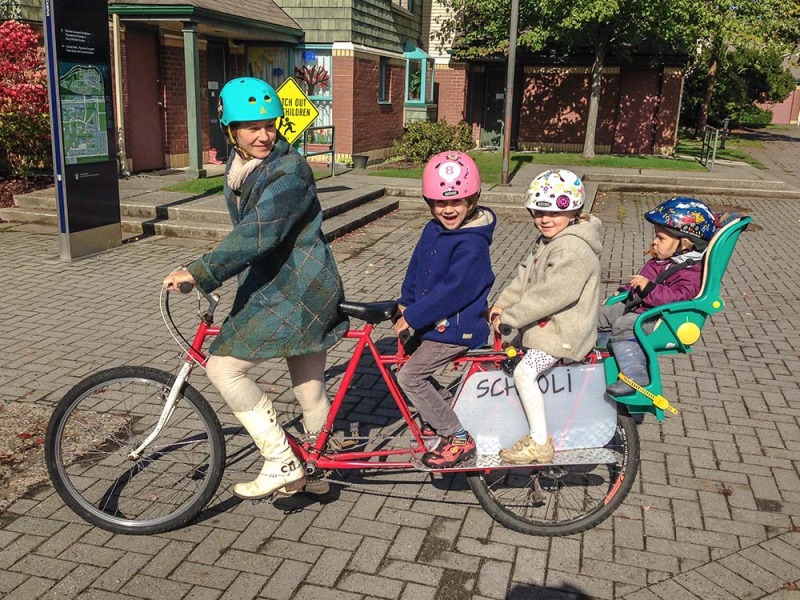 As Vancouver becomes a more attractive place to live, work and play, transportation planners are being forced to move an increasing number of people with a limited amount of resources. As a result, we have seen an unprecedented reallocation of road space and budgeting into protected bike lanes. City officials are complementing these investments with policy changes designed to increase safety, such as reducing speed limits, which has created a surge in the number of people choosing to cycle. All in all, this means friendlier streets for the efficient movement of people, and it only makes sense to utilize this infrastructure for the movement of goods, as well.

Rethinking the Movement of Urban Freight 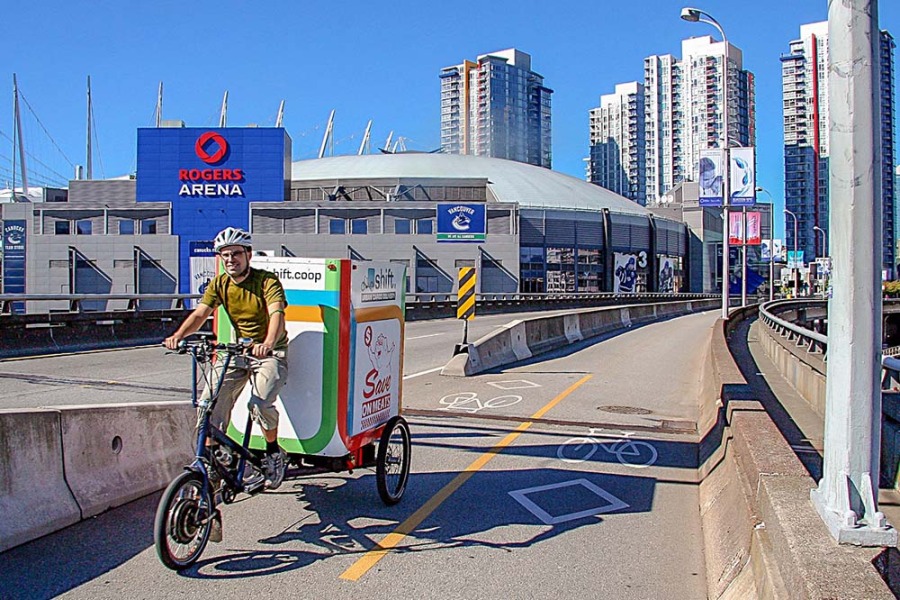 In addition to these “carrots”, many governments – including our own – are considering “sticks” (such as carbon, mobility, and congestion pricing) to discourage single-occupant vehicles. Already burdened with costly vans, fuel, maintenance, insurance, and paying drivers to sit in traffic; one can understand why many in the freight industry are rethinking the urban portion of their transportation network. On the local front, Shift Delivery has been a pioneer, making 40,586 unique deliveries (weighing a combined total of 300 tonnes) over a distance of 50,480 kilometres across Vancouver in their first three years of operation. And not only were these deliveries faster and more reliable than traditional methods, they have the added bonus of preventing 22,300 kg of CO2 from entering the atmosphere. 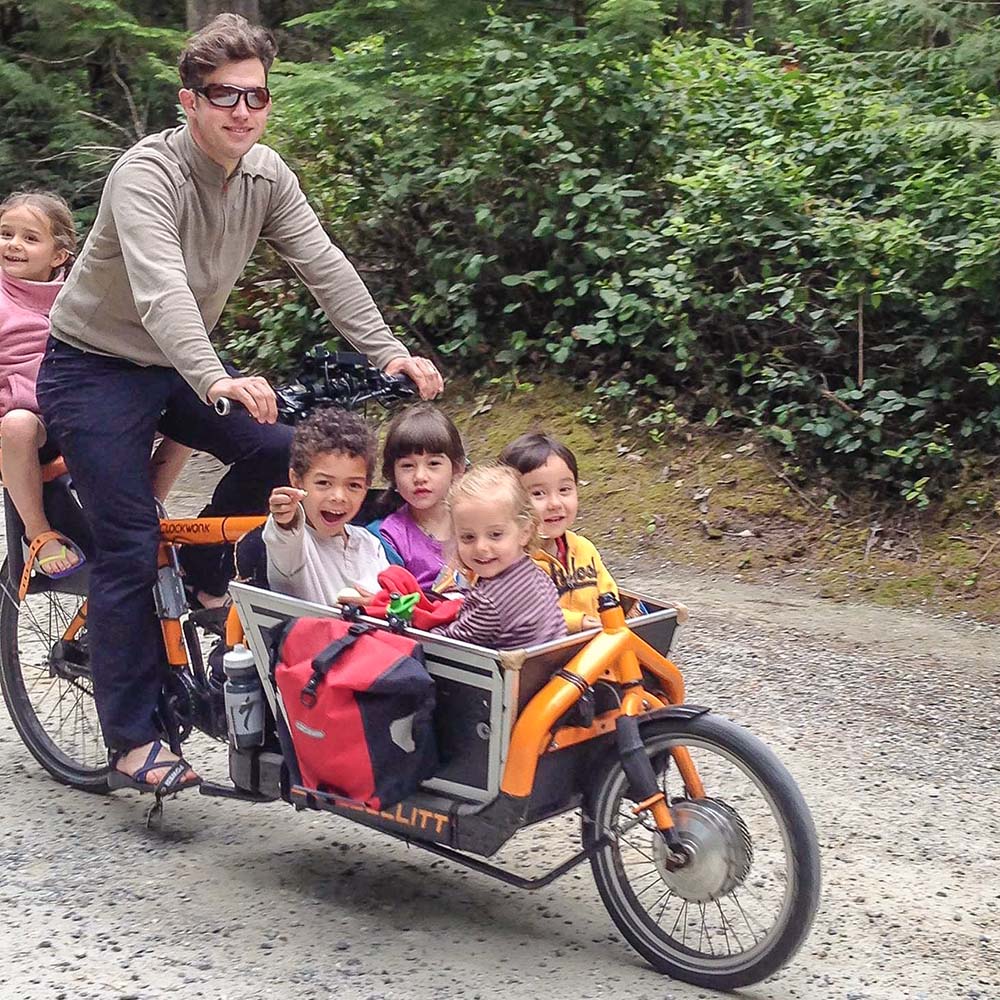 Much has been written about the urban migration of Millennials, and how their car-lite, multi-modal lifestyle has created a “silent revolution” in planning circles. Their demand for more pragmatic transportation options has lead the charge towards walkable and bikeable communities, car-sharing, and reliable public transit (which we’ve seen crystallized in data coming out of Metro Vancouver’s recent transit plebiscite). As this generation matures, settling down with a partner, a pet, and even kids, a cargo bike provides an ideal solution: what we often refer to as a level of domesticity without the burden of car ownership. It is our hope that this shift in attitudes also results in a realignment of gender roles, as both partners seek an equal opportunity to partake in child-serving trips, groceries, classes, chores, etc.

An Alignment with the Sharing Economy 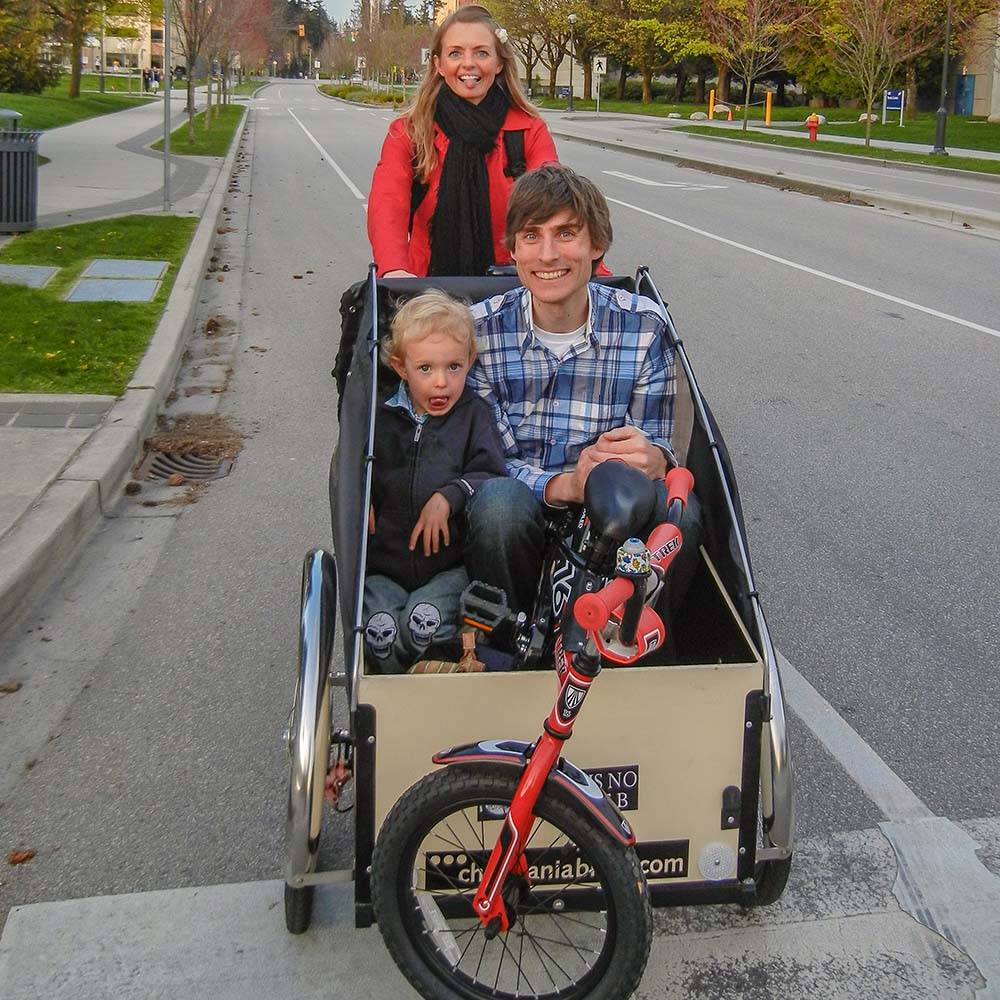 While providing a convenient means of moving people and products, there is one way to increase a cargo bike’s affordability, efficiency, and accessibility: sharing it with your friends and neighbours. Much like the private automobile, the average cargo bike will sit idle for the vast majority of its time. Thankfully, the rise of sharing economy has begun to address the inherent inefficiencies of ownership, allowing one to borrow a car, bike, drill, ladder, bedroom, or any other number of items for the exact amount of time needed. It is only a matter of time when these existing business models (think Modo, Zipcar, Evo, Car2Go, etc.) will be extended to include cargo bikes, as has been successfully executed in bike-friendly cities such as Munich. 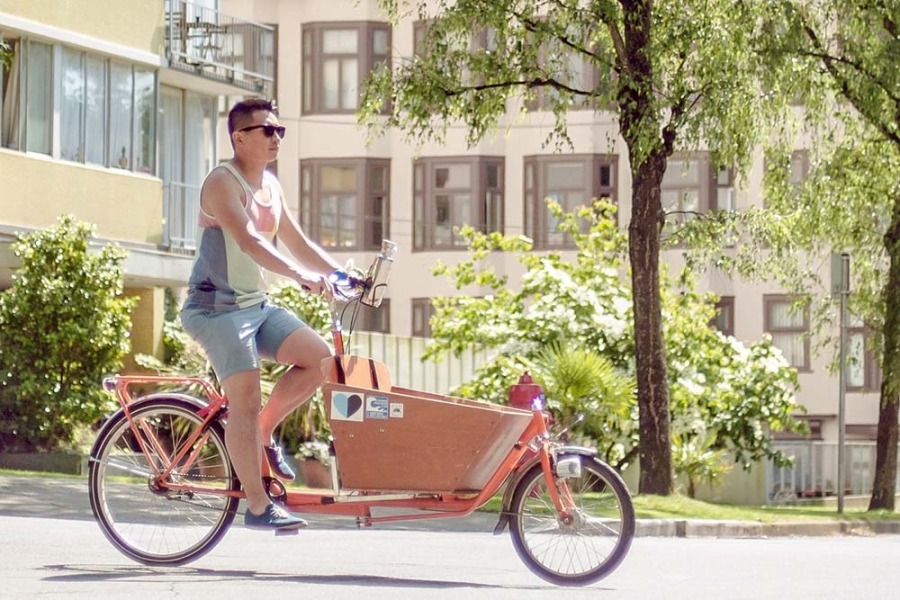 When food trucks were first piloted in Vancouver in 2012, they were touted as a trendier, cheaper, adaptable alternative to a static restaurant. However, the suddenly ubiquitous food bike manages to beat them on all three levels. Motivated by the “carrots” and “sticks” outlined above, cargo bike-based food service businesses are selling ice cream, fresh produce, coffee, and popsicles, directly where their customers want them. Keeping overhead low means an entrepreneur can enter the market and start making money immediately. Earnest Ice Cream are a shining example of this phenomenon: launched with a single bike in 2012, it has since grown in leaps and bounds, opening two very successful brick-and-mortar locations, and securing 15 distributors across the Lower Mainland in just three short years. 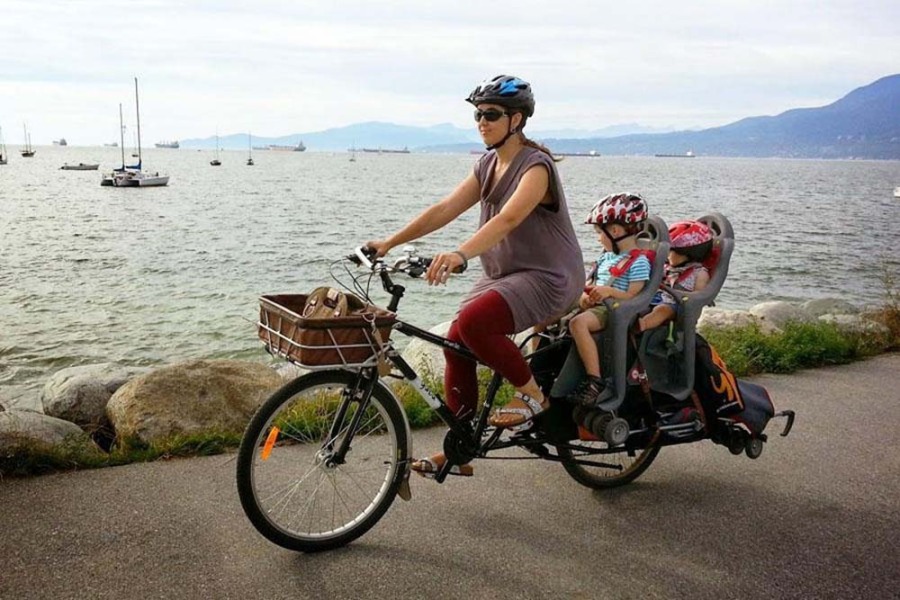 Reassuringly, more and more cargo bike manufacturers are popping up around the world, leading to increased competition and innovation, with brand new models (like the world’s first tilt-action cargo bike) hitting the market every year. However, many of these operations remain small – such as the two-person Metrofiets – and the bikes handcrafted in small batches. A fascinating, and most welcome development has been the recent arrival of cargo bikes from Chinese shores. And while there is no doubt that some quality is sacrificed, these mass-produced machines should ultimately lead to much lower pricing and much wider availability.

The Growth of Recreational Bicycle Travel 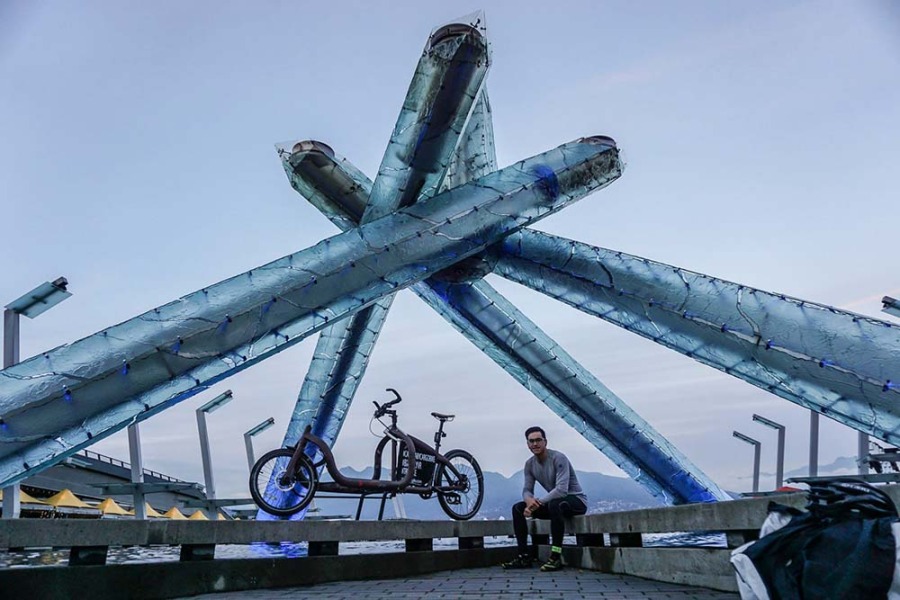 The traditional North American road trip seems to be losing its luster in recent years, as many discover the joys (and challenges) of touring by bike, whether for a few days or a few weeks. Recreational bicycle travel now represents $400-million of Oregon’s annual $9-billion tourism industry, a segment that grows every year. The only thing limiting this growth seems to be the amount one can haul, an area where cargo bikes can help immensely. The innovation mentioned above has lead to lighter, faster, more versatile designs, a factor that led to our friend Lamar becoming the first person to ride 4,000 kilometres across Canada by cargo bike late last year.

A Revolution With Many Unlikely Winners 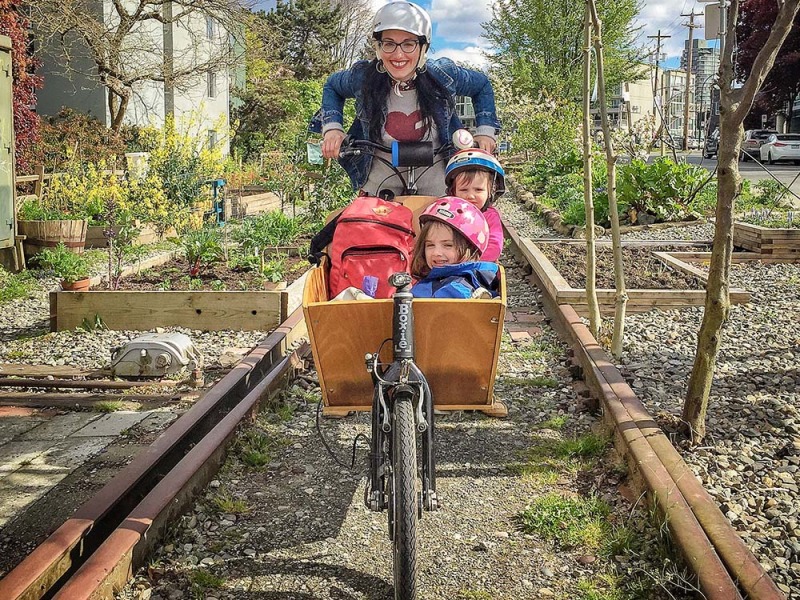 It is important to note that many of the factors driving the shift from motor vehicles to cargo bikes center on a transition to a more streamlined, cost-effective, and lucrative financial model, both on a business and a personal level. These decision makers are motivated by economics rather than a sense of altruism or social responsibility, and yet – in many different ways – all of our society will benefit. Just imagine Vancouver’s streets with fewer trucks and vans racing around to their next delivery appointment. There would be an immediate impact on sound and air quality, on road safety, and on public health. In that sense, Vancouver’s upcoming cargo bike revolution will see many unlikely winners. We can’t wait to be a part of it.

Interested in seeing a variety of cargo bikes up close and personal? Come check out Vancouver’s first Cargo Bike Championship at Creekside Park from 4pm during the ‘Bike to Work Week’ Wrap-Up BBQ Friday, May 29th. More details can be found here.

Chris and Melissa Bruntlett are the co-founders of Modacity, a multi-service consultancy focused on inspiring healthier, happier, simpler forms of urban mobility through words, photography and film. You can find them on Twitter: @modacitylife.