Immediately after we witnessed the idiotic events of Wednesday evening, Vancouver began its own mass catharsis to demonstrate to the rest of the world that the few who wrecked downtown did not reflect the entire populace this city. Here’s a total recap of the movement.

This is a collection of the positive moments that have defined Vancouver since the riot. All photographers have been credited at the end of this article.

It all began with efforts spread with social media. The real anger and embarrassment didn’t come from the rioters (they were having fun), but those who felt their actions were completely unnecessary. Facebook pages, blogs, and forums were started immediately to identify who was behind the nonsense. Our Happy Planet-Mayor Gregor Robertson appeared genuinely P.O.’d at the mayhem, his reaction posted immediately on YouTube. The public shaming began very quickly, but all of the social media gave rise to a much more positive response. 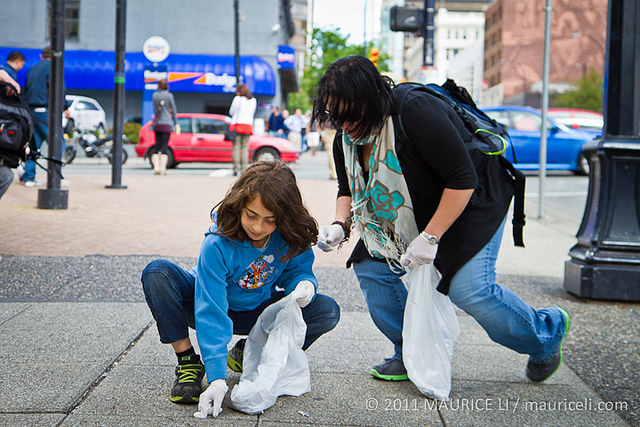 That very same night, a Facebook event gained over 8,000 participants instantly started by UBC student Chris Smith. At 7am on Thursday, what wasn’t cleaned up by city crews and renovation companies was immediately tackled by Vancouver. Nearly one thousand people from the city and across the Lower Mainland showed up with trash bags, brooms,  gloves. City workers helped to provide supplies for citizens who did not have any materials to bring. Thursday morning was the beginning of the city’s mass catharsis of the largely unnecessary event. 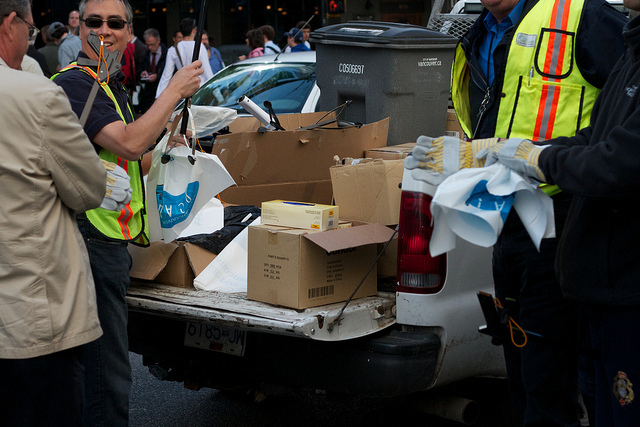 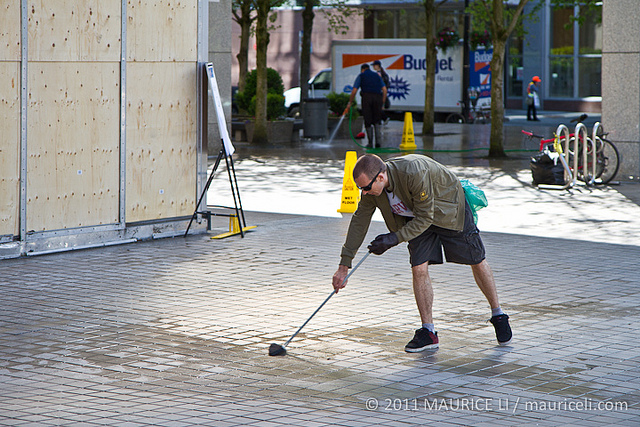 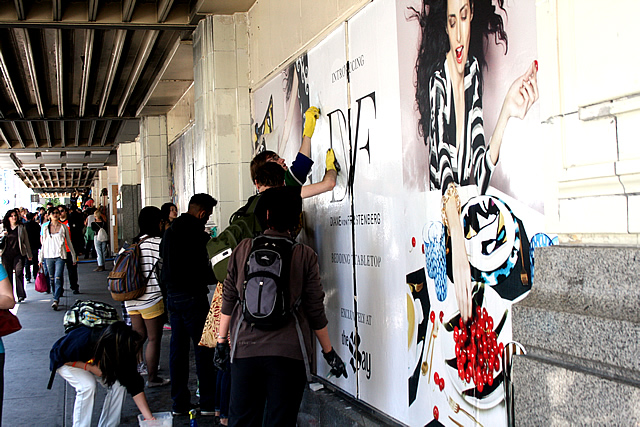 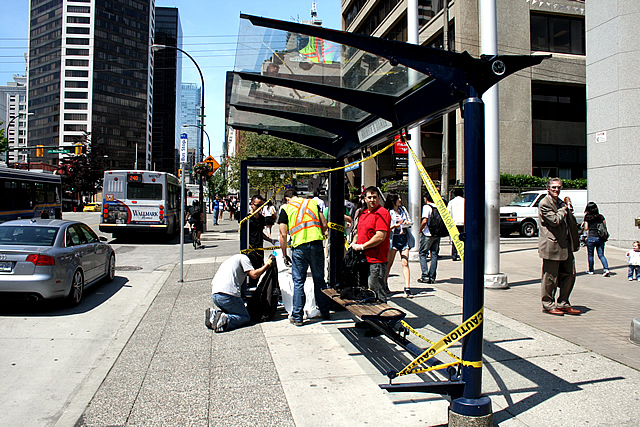 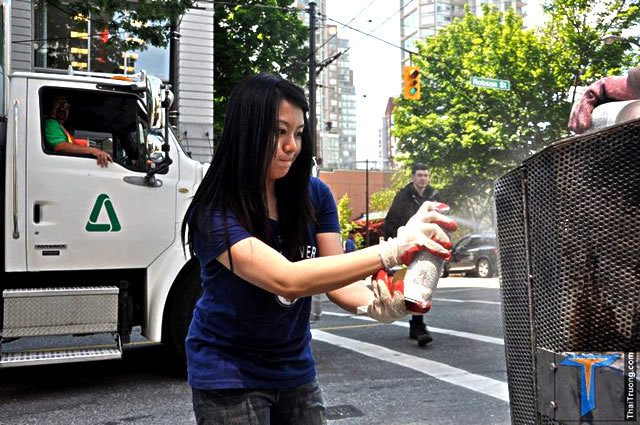 Volunteers were thorough in all areas of “ground zero”. Everything from burnt trash cans to shattered glass to smoked tiles, Vancity cleaned everything it could in its sights. Thursday afternoon I visited the areas affected by the riot and I was amazed to see volunteers still cleaning the streets. A small group even began attending to street drains that had collected garbage and clogged from burnt debris. So many passerby’s stopped to witness such extensive efforts, some looking emotionally touched. 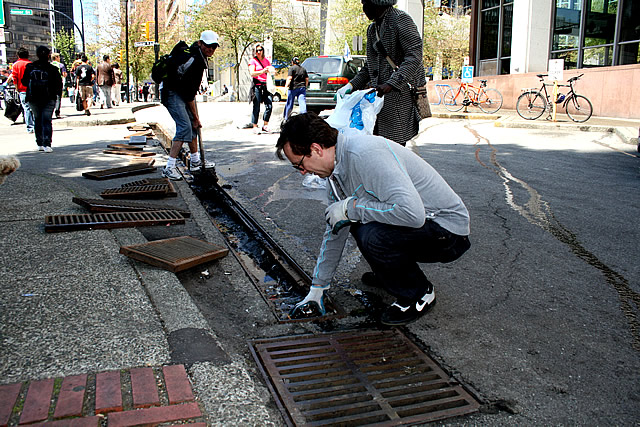 Some words of comfort for those who worry about Vancouver’s tainted image: the world is still watching every moment. I personally saw TV crews roaming ground zero and interviewing volunteers non-stop. At every major site a camera crew was interviewing one volunteer or another, and even individuals seen in YouTube videos confronting crowds hell-bent on breaking windows were reported to have been assisting the clean up, too. 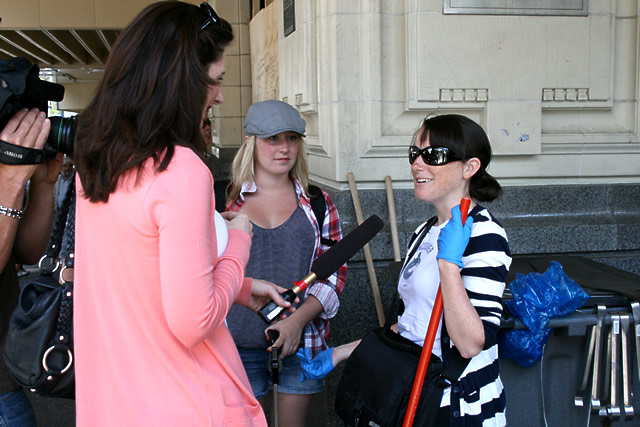 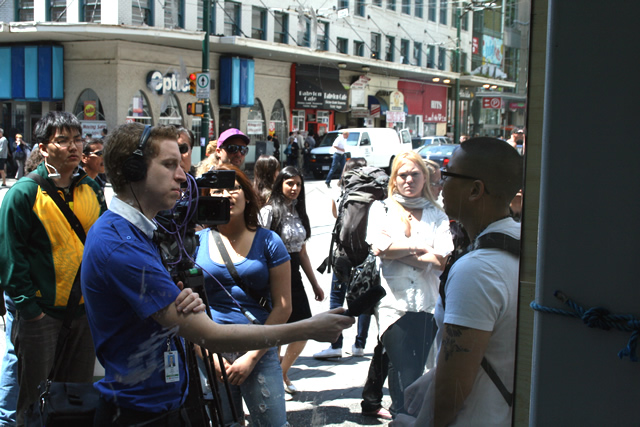 Soon the clean up efforts began to be replaced by messages of peace, love, and apologies. The boards that replaced the broken windows of storefronts became shrines of the ongoing catharsis. Marker, sharpies, post-it notes, and paint soon dominated the wooden covers. By Friday, not only was every window at the bay filled with messages from visitors but the overhead pedestrian cover was soon decorated as well. 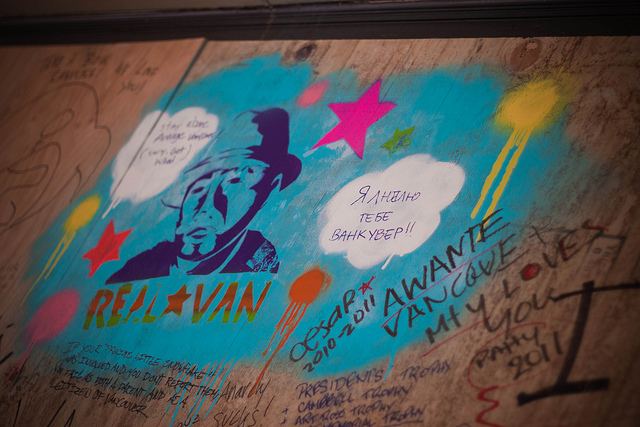 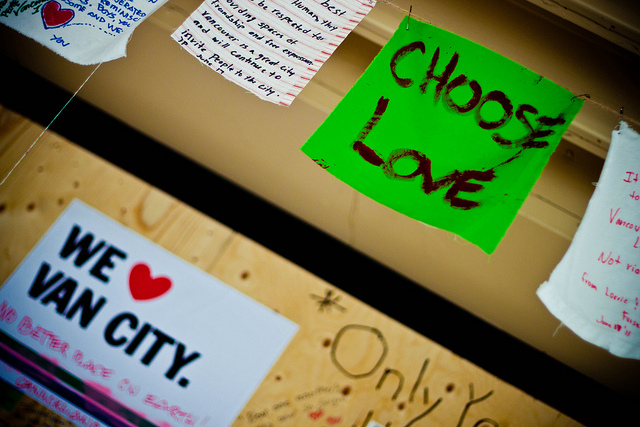 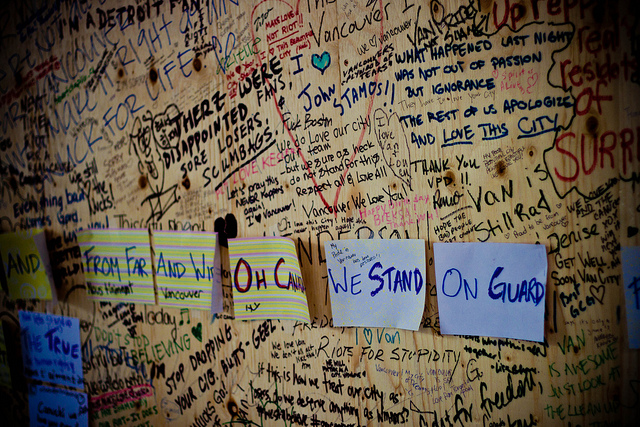 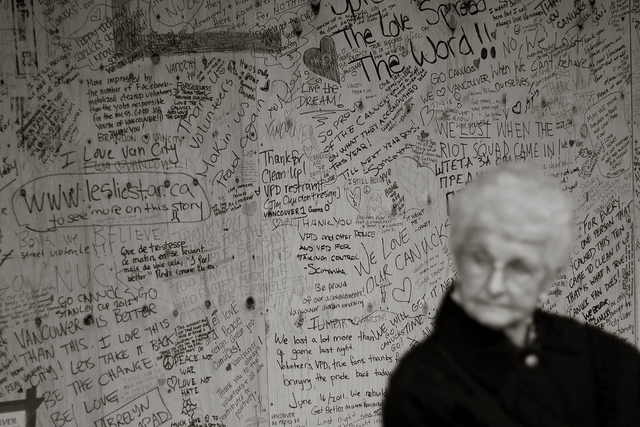 A police car has become a symbol of gratitude and redemption when it was decorated in messages of thanks. Beginning as a simple post-it note, the car was eventually covered in hundreds of messages from strangers. The delivery to the Vancouver Police Department was well-earned as both officers and firefighters did an excellent job on the night of the riot. For many, the car was a positive change from the recent images of police vehicles burning in flames. A tent was erected to protect the multitude of notes from the rain. 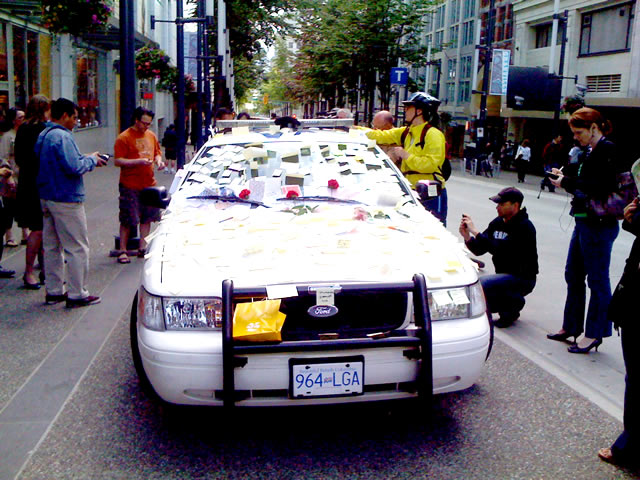 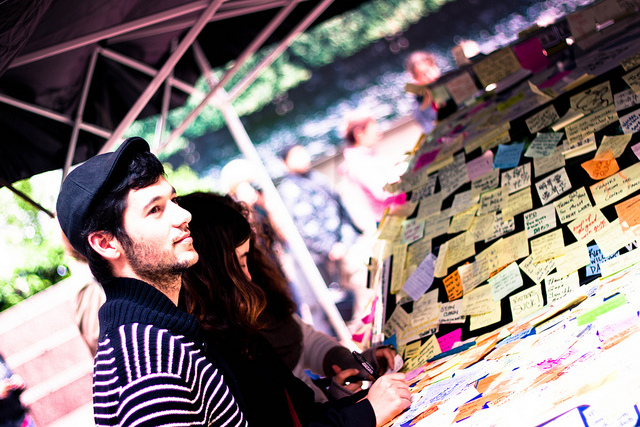 Chalk art broke out downtown with messages of apologies, Vancouver pride, and support for the Canucks. 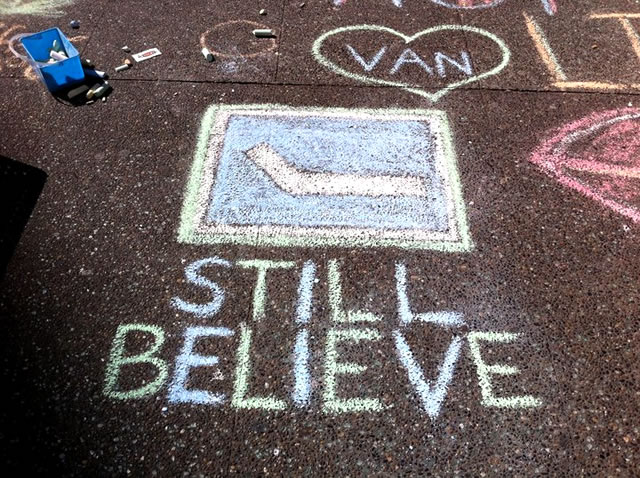 And the display of peace hasn’t stopped. The Vancouver chapter of Yes!+ Canada held a small flash mob at the Vancouver Art Gallery to promote positive spirit and send a message that violence isn’t accepted in our city.

It wasn’t just individuals that responded, either. On Friday, the TD Friends of the Environment Foundation donated $15,000 to the City of Vancouver to help replant and repair trees that were lost during the riot. The Bay also hosted a pancake breakfast to say thank you to the many random volunteers that arrived on Thursday to help clean and repair their storefront. 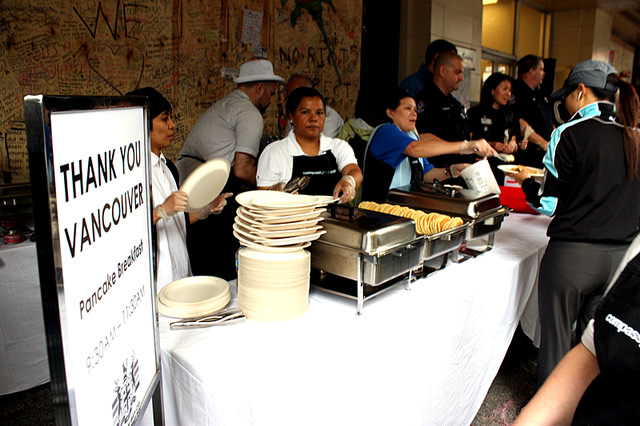 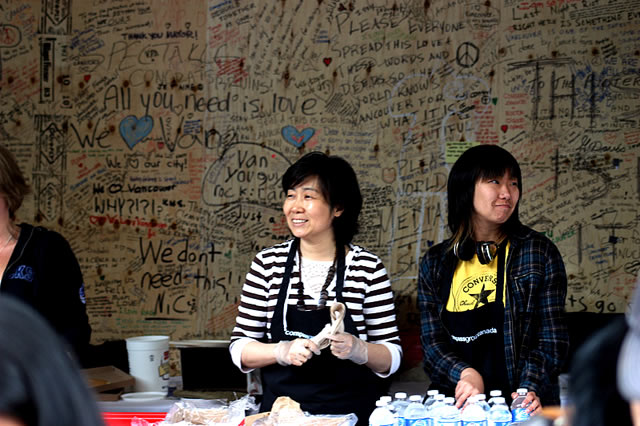 Even the city posted signs of thanks and gratitude. It also issued a release thanking volunteers and clean up crews. 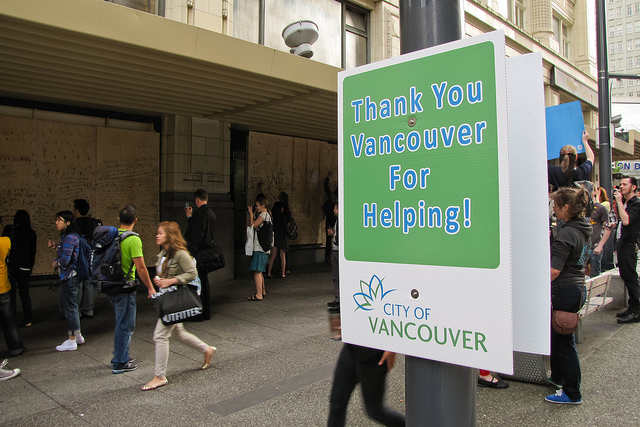 There is not much more to say, except I don’t think I never imagined such a massive positive response from the City of Vancouver. I knew there would be a blacklash, but so many people have one way or another contributed to the beauty of this city. Some say downtown Vancouver looks cleaner than before, and all the positive messages and actions since the riot define the real character of this city. This is what makes Vancouver such an awesome place.

The Vancity Buzz supports “This Is My City”.

A Vancouverite said it well just a year ago with his own video. Got your own? Send it to us! [email protected]