We are all well aware of the 2011 Stanley Cup riot – where normalcy was suspended in favour of hooliganism for a few hours in the downtown core. I imagine many of you even witnessed it first hand, and I can only imagine how surreal the experience must have been. I also imagine that you would think that it would be difficult, perhaps even impossible, for an artist to recreate that feeling. But James Hoff has managed to do just that, and his latest exhibit, ‘How Wheeling Feels When the Ground Walks Away’, transports you to a place that can best be described as the epicentre of chaos. It is something that everyone should experience.

The exhibit consists of a series of speakers placed around the Or Gallery’s exhibition space. As you approach the speakers the sounds of a riot become audible, and slowly but surely the chaos starts to cycle through each of the speakers. In a stroke of genius, Hoff has each of the speakers set at a different volume, so sometimes the shrieks of anger or the clanging of the tear gas canisters are muted, while other times they are so loud they almost make your bones shake. Also fascinating is the way the speakers are positioned. At first blush it would appear they have been placed around the room randomly, but once the sounds begin to cycle through them it becomes evident that they are arranged in a way that maximizes the auditory experience.

The speakers that are set at max volume are located near the walls, causing an awesome echo effect. The quieter ones are near the middle, packed amongst each other, which causes them to sound whisper quiet. It is a perfect example of how sound, placement and space affect one another. 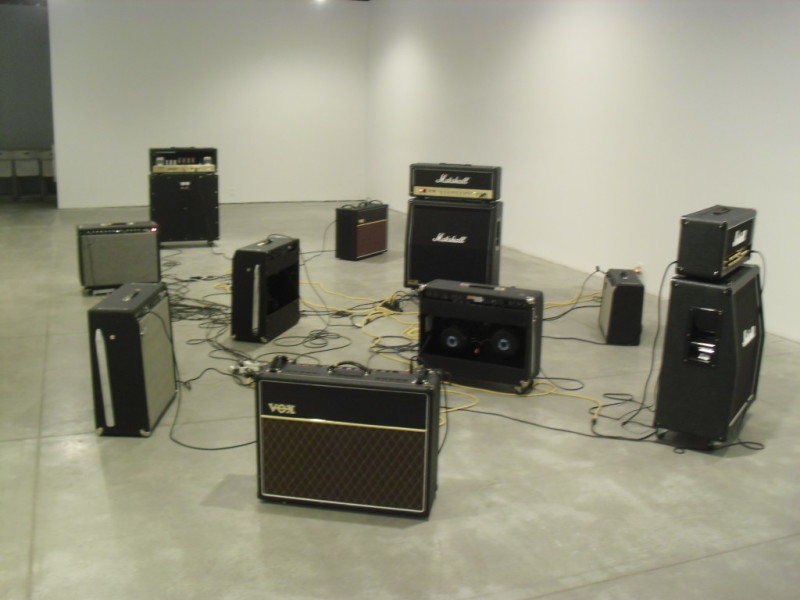 However, what is also interesting is that there is more than one type of riot on loop. After the street riot ends the sounds of a rock concert begin to cycle through the speakers, and we hear the band tuning their guitars, and the fans in the mosh pit becoming increasingly agitated. Eventually this too reaches a riotous climax, as the sounds of instruments s being smashed caps this aggressive crescendo. This writer interpreted the inclusion of both a street riot and a concert as an attempt by the artist to remind us that riots occur for both political and non-political reasons. For those of you who were in Vancouver during the summer of 2011, this is something you are already far too familiar with.

The exhibit runs until May 3 at the Or Gallery – 555 Hamilton Street, Vancouver.