Vancouver’s Rio Theatre is thrilled to announce the first installment of their new genre film festival, The Rio Grind, taking place November 2-4, 2012. A fitting film festival for a town know for its unusual productions.

The Rio Grind Film Festival is currently accepting for submissions (submission cut off date is October 15) of independent horror, action, grindhouse, erotica, fantasy, documentary, animation as well as science fiction shorts and features from both Canada and around the world. 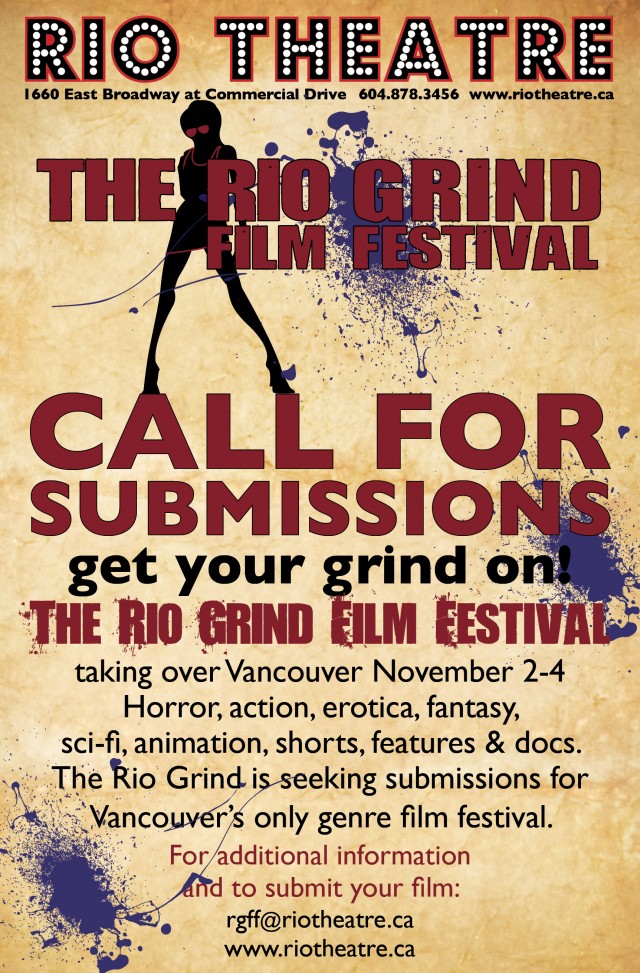 Theatre owner and operator Corinne Lea, herself a “huge fan” of genre films, has made a point of regularly programming obscure and cult features into the theatre’s schedule for years (Friday’s late-night movies are one of the city’s most popular regular events), in addition to hosting local competitive film festivals like the Dead On Film Zombie Short Film Competition.

Following the ongoing success of the Rio’s Horror Nights film series, hosted monthly by identical twin directors Jen and Sylvia Soska of Dead Hooker in a Trunk and the upcoming American Mary fame, a festival celebrating the best of genre seemed like a no-brainer.

“We always have such amazing, enthusiastic response from our audiences with everything from Dead on Film and Horror Nights that we knew it was time to bring them something bigger. This festival is going to be all about the fans. This is our chance for us to bring them the best of the best from around the world,” says Lea.

Vancouver’s own Soska sisters will be on hand as consultants and judges for The Rio Grind. “Vancouver has long been a town that focused on the different, from acclaimed television series like The X-Files to our diverse multicultural and multi-subculture mix of population, we have an identity that suits and thrives in our often grey and rainy city scape,” explains Sylvia.

“A town that lives and breathes genre so wholly has been only missing one thing – a film festival that celebrates this romance with the unusual and unique. I am thrilled that a theatre that so embraces the soul of the community, the Rio Theatre, will be the ones ushering in this new and needed festival that counter balances the mainstream and puts the focus on the independent artists.”

Lea agrees. “Dark, edgy films are often excluded from mainstream film festivals and genre filmmakers need an outlet to get their films out to fans like ours, who are hungry for it. The Rio Theatre wants to bring these fans and film makers together.  We want to give them the best of the best indie films we can find, and we’re going to do that with The Rio Grind Film Festival.”

Prizes (TBD) will be awarded by both a judging panel and the festival’s audience in several categories. In addition to current and emerging talent, there are plans to screen classic retrospective titles rarely seen in the big screen, opportunities for director and talent appearances and Q&A sessions, and focused panels and workshops that will appeal to both fans and aspiring filmmakers.

For additional information on how to submit your production for consideration into The Rio Grind Film Festival, stay up to date by visiting their Facebook Page and riotheatre.ca.