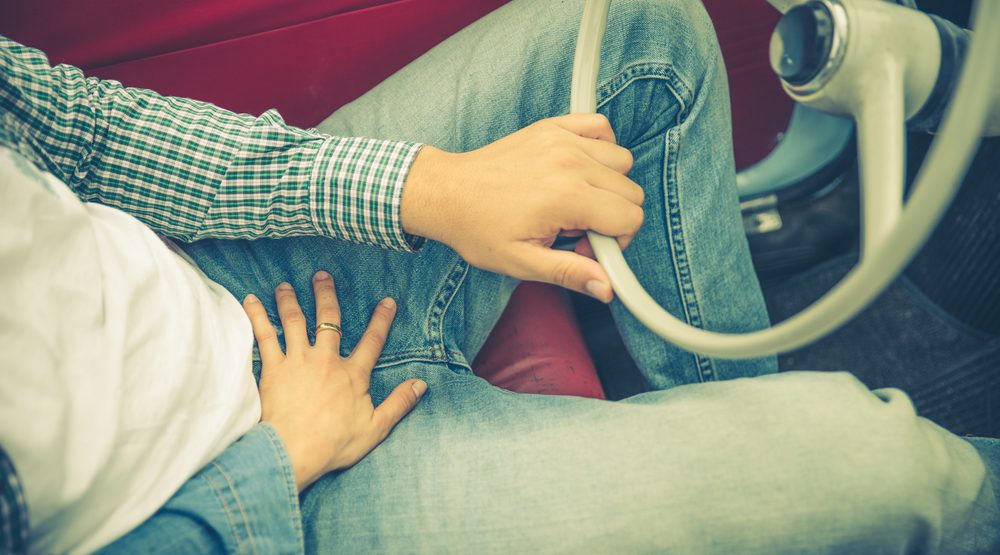 Two people were left red faced after being pulled over by Richmond RCMP officers who spotted them having sex while driving.

Richmond RCMP took to Twitter on Wednesday after spotting a couple engaged in “coitus” behind the wheel.

One of our officers stopped a 🚗 w/ a couple engaged in coitus while driving. License & registration took longer than expected to produce…

The embarrassing incident took place in the area of the No. 5 road on Westminster Highway in Richmond early yesterday evening.

“One of our road safety enforcement officers noticed unusual behaviour in a vehicle they were observing,” Cpl. Dennis Hwang with Richmond RCMP told Daily Hive Vancouver.  “The officer saw two people in a space where normally you’d expect to only see one, in this case the driver’s seat.”

Hwang says that the officer followed the vehicle in question and pulled it over after observing that the driver had struggled keeping his car in a straight line. The officer noted that it took the driver some time to produce the proper documentation when called upon.

“Even though the matter was quite serious and the couple were obviously embarrassed, the officer approached the incident with a good sense of humour,” Hwang said.

Alongside the obvious embarrassment the couple were also issued with two violation tickets as a result of the incident: one for ‘Driving Without Due Care ($378)’ and one for ‘Fail to Wear a Seatbelt ($167)’. Neither of which require much in the way of imagination.

“Obviously we don’t condone their behaviour,” Cpl. Hwang told us. “Not to be a buzz kill but there are very real dangers involved.” Those dangers include the potential risks posed to other road users and pedestrians, but Hwang also noted that in the event of an accident the vehicles airbags could have seriously injured the amorous couple.

“Airbags in vehicles are designed to work in a certain fashion. If you have two people in a space where one is meant to be, they could cause serious injuries upon deployment.”