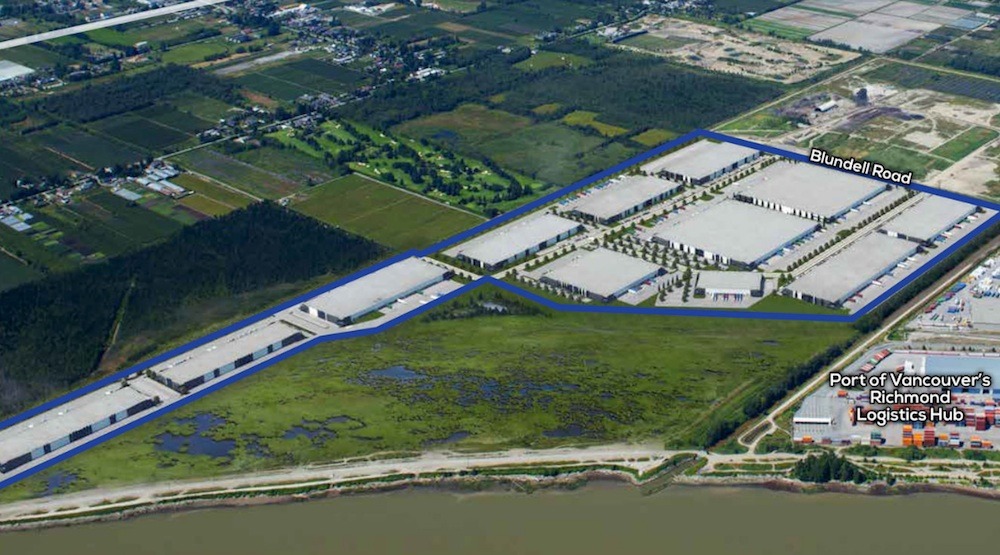 Artistic rendering of the Richmond Industrial Centre next to the Port of Vancouver's Richmond Logistics Hub in South Richmond. (Montrose Property Holdings Ltd.)

Construction has begun on the Richmond Industrial Centre, which is being billed by project proponent Montrose Property Holdings as the largest industrial campus in the region. It is located near the north end of the George Massey Tunnel and immediately west of the Port of Vancouver’s Richmond Logistics Hub warehouse complex.

The project’s first phase consists of two buildings comprised of 1 million-sq-ft of leasable space within two buildings, with the first building ready by fall 2018. When all phases are completed in 10 years, the campus will boast nearly 3 million-sq-ft of warehouse space over 170 acres of land.

“We worked closely with the City of Richmond to develop a project that would be mutually beneficial to the community as well as it’s tenants,” says Tom Land, CEO and President, Montrose Property Holdings Ltd, in a statement.

“The space is rare because of its flexible amenities. They will be built to cater to a wide variety of businesses such as e-commerce, wholesale, manufacturing or any other business or company that believes in sustainable practices, thoughtful outdoor landscapes and an efficient locale.”

In May, construction also commenced on Beedie Development Group’s Delta Link Business Park near the South Fraser Perimeter Road in Delta. At the time of the groundbreaking, 70% of the space was either already pre-leased or sold.

There will be 1 million-sq-ft of space distributed across seven buildings, which will all reach completion next year.

A recent report by CBRE found that Metro Vancouver’s industrial land supply could run out by 2020, which could dampen the region’s economic growth. Large warehouse spaces are needed by companies in the construction, manufacturing, film and television production, and e-commerce businesses, and all of these industries are booming.

Demand for industrial space in the region this year is 2.5 times greater than the new supply being added to the market.