This time last year, Jason Savedoff found himself counting down his last few days of incarceration in a Seattle halfway house. He was finishing off the tail end of his prison sentence for committing the largest archival theft in U.S. history. In order to maintain some level of sanity, he funnelled his manic energy into art – and now he’s up for an award at the Toronto International Book Fair.

A combination of mental health issues, life circumstances, and a serendipitous New York encounter led Jason down a path of criminality that mirrors something out of a Hollywood script. Described as ‘breathtaking’ in scope by US authorities, Jason and his co-conspirator stole a vast array of historical documents from George Washington, to Benjamin Franklin, to Beethoven, to Marie Antoinette and countless other prominent iconic figures. Historical Societies and Presidential Libraries were targeted across the North East, from Vermont, down the coast to Maryland, where their House of Cards eventually crumbled. It was like National Treasure meets Ocean’s Eleven meets Catch Me If You Can – but in real-life.

After a 16-month pre-trial period working with the FBI and National Archives, Jason was sentenced to two one-year prison terms. He spent Christmas of 2012 back home with family in Vancouver, and then self-reported to a Federal facility in Oregon to begin his prison sentence.

During the initial inmate processing, it was discovered that the medication he had been taking for his bipolar condition was unavailable. He was faced with a decision to accept a cheap alternative or just brave the elements without medication – he chose the latter.

Stepping into a Federal Prison in the US is daunting of in itself – doing it while going cold-turkey off a cornucopia of pharmaceutical drugs is a whole other matter altogether. As he walked through the crowded halls to his bunk, he knew he was in for a wild adventure. Because of the high-profile nature of his crime and its international media exposure – his case even made it onto 60 Minutes and was syndicated by the AP and Reuters – some inmates knew him by name.

It was totally surreal.

After promising friends and family that he would finish his sentence without ‘making any friends’, he knew that prison was an opportunity for self-reflection, introspection and creative expression – but how? Determined to make the most of his time, Jason turned his prison time into an 11-month self-taught art therapy session utilizing any and every available resource he could muster in his humble surroundings.

Much to his delight, Jason discovered that a few months prior to his arrival, the Bureau of Prisons had implemented an iTunes-like music system where inmates could buy a small Sansa MP3 player and pay the equivalent of $1 to download songs onto their device. He loaded up music from Canadian musicians like Deadmau5 and Drake and was, alas, alone in his own little world, so to speak.

Further, as Jason familiarized himself with the schedule at the facility he realized that he had ample time to engage in one of his favorite activities that had long eluded him during his crime spree: making artwork.

The transition from stealing art to creating it was a transformational experience. Inspiration came from the stories and sights that surrounded him in his newfound environment. Foreclosure, divorce, child-support, corruption, and women were the main topics that formed the basis of most inmates’ stories. Channelling the emotions of their spoken words and using the imagery from their prison photo albums, he embarked on a journey that saw him create a piece of art almost every other day.

After serving 7.5 months in Oregon, Jason was transferred to a halfway house in Seattle. When he was given permission to leave the facility, he worked part-time at Abercrombie & Fitch. The rest of the time he was trapped inside, lost amidst the deepest depths of his imagination, creating art that captured the essence of his emotions at any given moment. He didn’t have access to a psychiatrist so he had to improvise, pivot and adjust.

At the strangest of moments, it dawned on him that there was a narrative woven throughout his art collection. The hours spent listening to music and letting his thoughts translate to movement on paper, led to a visual display that very intimately represented his innermost feelings. And then the light bulb moment occurred: let’s self-publish.

Because lockers in prison are routinely raided by guards, Jason would gather five to 10 pieces of art, photocopy them and mail the originals to a friend in Toronto for safe-keeping.

One dreary fall evening, Jason spread copies of his artwork across the living room floor of the halfway house and within a few hours, had written words to accompany most of the images. He emailed the content to his friend who used Blurb to build the art and words into a book and self-published using the platform.

Fast-forward to the one year anniversary of his release, and his book – Ad Lucem: The Art of a Felon – is short-listed for the Creation of Stories Award to be presented at the Toronto International Book Fair. 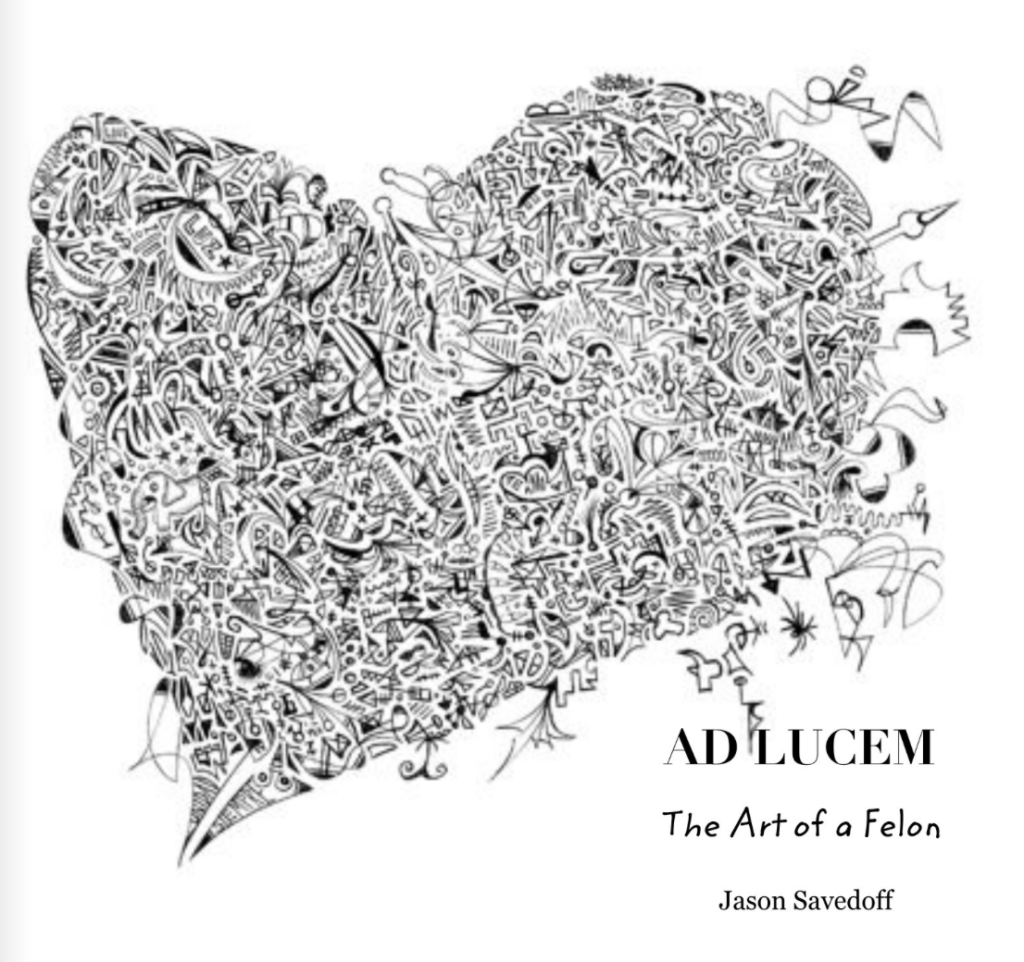 It could be the world’s only art book whose content is inspired by the crowd-sourced stories of U.S. Federal inmates and self-published from prison. The story is one of resilience, mental health awareness, social injustice and an unwavering faith in the power of the universe.

Serving his probation in Vancouver, Jason has teamed up with Face of Today charitable foundation, ArtsAlly, and Raycam Community Centre to bring the therapeutic benefits of the artistic process to youth in the Downtown East Side.

Show your support for Mental Health Awareness by voting for Jason’s book at www.artandsocialchange.ca/awards. Voting ends tonight at midnight.