The provincial government has approved the referendum question proposed by the Metro Vancouver’s Mayors’ Council on Regional Transportation and revealed the preliminary timeline for voting period.

Transportation minister Todd Stone made the announcement today, although there will be slight changes to the proposed question and concept. The approved ballot question will ask voters the following: “Do you support a new 0.5% Metro Vancouver Congestion Improvement Tax, to be dedicated to the Mayors’ Transportation and Transit Plan?”

Metro Vancouver’s mayors originally proposed to increase the PST by 0.5 per cent – from 7 per cent to 7.5 per cent, but Stone maintained that the added tax had to be “separate and distinct” from the PST. If approved by residents, the 0.5 per cent Metro Vancouver Congestion Improvement Tax would be applied as a sales tax to most of the goods and services that are also subject to the PST.

“The Minister’s approval today clears the way for a spring referendum on our plan to cut congestion by improving major roads and existing transit routes, and creating new bus and rapid transit services throughout the region,” said North Vancouver District Mayor Richard Walton, and Chair of the Mayors’ Council. “This is a significant milestone in our proposal to keep this region moving as we accommodate a million more people in the next 30 years. We simply can’t afford to do nothing.”

Residents living in the Metro Vancouver region will receive their ballots in the mail beginning March 16, 2015. Similar to the 2011 BC HST referendum, the voting period will be through the mail over several months, concluding on May 29, 2015 before the provincial government’s June 2015 deadline.

Only an absolute majority (50% + 1) will be required for the ballot question to pass for support. The provincial government will cover Elections B.C.’s costs to administer the referendum, but it will not provide funds for the proponent or opponent groups.

While the Mayors’ Council has maintained that the vote will be a “referendum,” the provincial government has called it a “plebiscite,” which means the result of the vote will be consultative rather than legally binding on the government.

A recent survey indicated 52 per cent of regional residents would vote ‘Yes’ in the referendum. 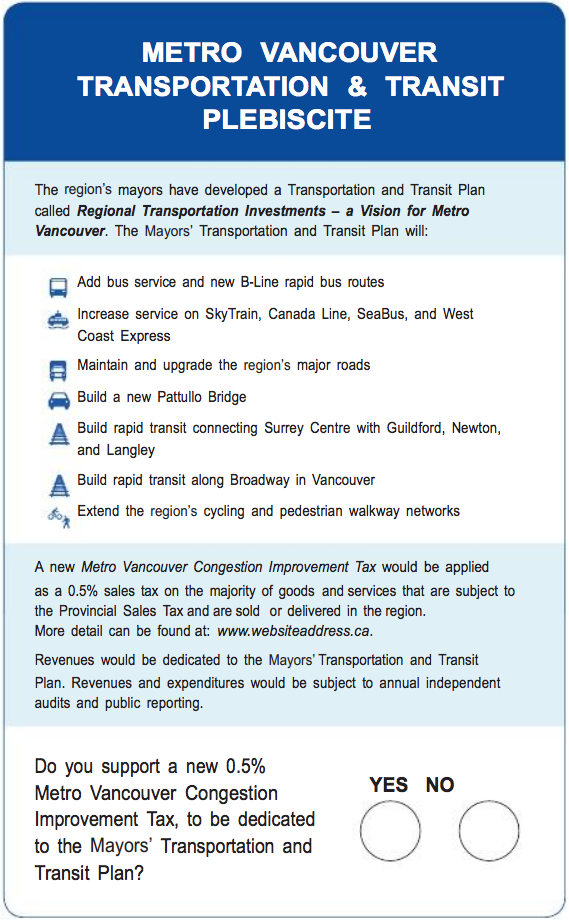