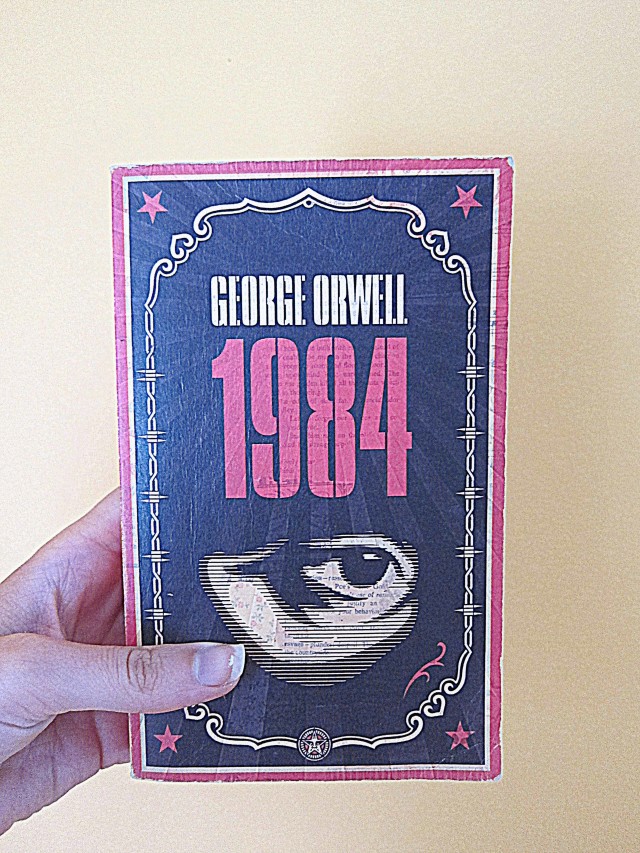 “People simply disappeared, always during the night. Your name was removed from the registers, every record of everything you had ever done was wiped out, your one-time existence was denied and then forgotten. You were abolished, annihilated: vaporized was the usual word.”

Franklin D. Roosevelt once said, “Men are not prisoners of fate, but only prisoners of their own minds.” 1984 is a book concerning a ubiquitously brainwashed population ruled by a Totalitarian government, and that’s putting it lightly. The Dystopian society (meaning people who are regularly screwed over by their government) features various forms of coercion, on both a physical and psychological level, through thought control, which a form of mental manipulation enforced by a regime known as Thought Police.  All traces of human individuality are abolished and the concept of family eradicated, as all loyalties are directed to Big Brother. Essentially this book is a big ol’ gulp of “THIS CUD B YUR FUTURE!!” The Dystopian rulers are brutal in their law enforcement tactics, often resorting to violence, the threat of room 101, or incineration in “the memory hole.”  The story follows Winston Smith, a lower-class government employee, whose mind is tempted to explore the forbidden concept of truth, because living without loving sucks. He attempts to escape the clutches of the ruling class, and stray from his designated place in the hierarchy, by chasing tail and mental freedom. Unfortunately Winston’s actions against “Big Brother” are propelled by the idea that an anti-government civilization, known as “The Brotherhood,” dwells in the shadows of the corrupt society and are plotting their moment of revolution (see: movie Equilibrium). However, I personally perceive “The Brotherhood” as a state of mind. The thought alone that an opposing force to The Party exists, provokes feelings of empowerment and hope. It is with this notion of  hope that brings about a stir within Winston, and without it would not have taken action against a seemingly impossible system. The “Brotherhood” is the hope for humanity, and The Party’s only threat. Though the novel is slow at some points, like the consecutive chapters of  Winston reading the regulations of “The Party,” purely based on its widespread controversy (it appears on many “banned books” lists), and its reputation as one of the most influential novels written about a suppressed society, I would give this book a quick read while you still have the choice. BIG BROTHER IS WATCHING YOU. 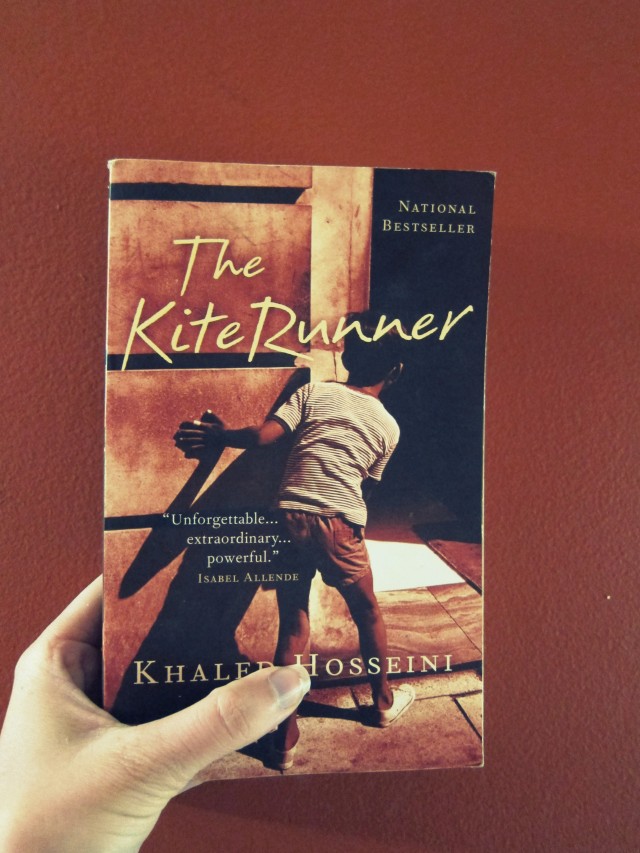 “There is a way to be good again.”

Following the “terrorist” attacks on September 11th 2001, I believed there was a widespread division in mentalities regarding the Middle East. Half wanted to continue living in ignorance, keen on generalizations and stereotypes. While the other half made the conscious decision to seek to understand and make a positive distinction between a people, and a people’s government, more or less recognizing that not all minds build bombs. Although the story is fictional, the underlying social and cultural customs are valid, and serve to shed a light on the human lives bound in a terrible misunderstanding. The story contradicts the notion that Afghanistan is infested with terrorists and vengeful intentions, and instead hopes to delicately surprise its readers as the intimate journey of the characters unfold, much like lifting a rock to find a flower. In “The Kite Runner,” Khlaed Hosseini finds a non-threatening way to harmonize an unknown land and the “American way.” Without saying, “Look you’ve got us all wrong!” he delicately presents a story and lets us fall in love on our own. The ability to relate to the forces that shape us through friendship, survival, betrayal, redemption and acceptance, allows for a smooth transition into the afghan culture and says “see, we aren’t much different you and I, in the way we love and have lost.” He allows the story to seem, based on emotions, like it could be unfolding just down the street. The novel touches on some heavy content in order for the tragedies of the story to unravel. Hosseini does an extraordinary job easing the reader into the facts. The historical material slips in quietly alongside the characters and compliments their lives. Two afghan tribes are explored – the dominant Pushtan, and the oppressed Hazara. The books central focus is on the friendship between two children, one from each tribe. As they grow through their struggles and decisions, they realize that the outcome of their adult lives is shaped by the cruel and shameful decision of one of the boys. The book flirts with the notion that every day is a chance to change, to right the wrongdoings of our past, and to seek forgiveness. I was captivated by “The Kite Runner” based on Hosseini’s knowledge of the Middle East and his structure and grammatical finesse. His ability to weave a beautiful story from the threads of tragedy, led me to his second book, “A Thousand Splendid Suns,” where I officially inducted a Khaled Hosseini novel into my personal list of “Top Ten Favorite Books.” And trust me, that list means business. 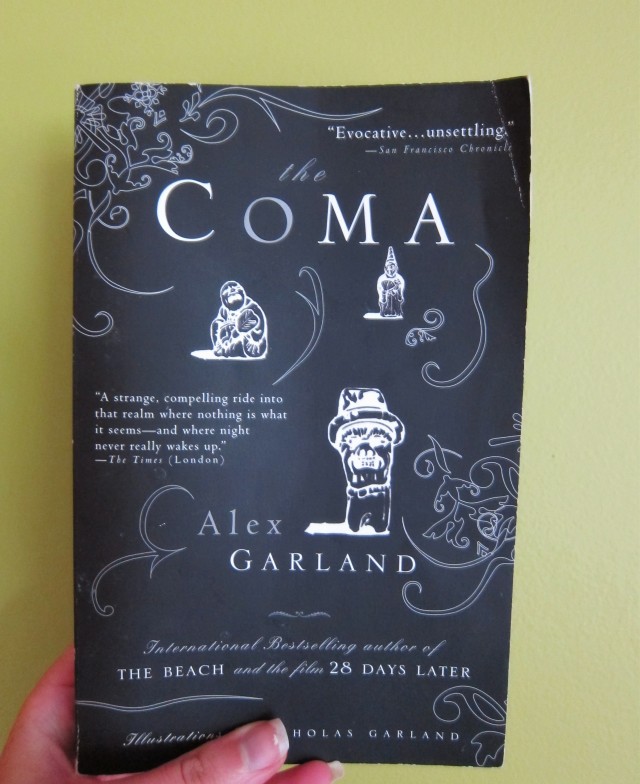 “Waking was the most reliable part of a dream, as built into dreams as death is to life. You dream, you wake: you live, you die.”

The Coma is much like poetry, in the sense that it is written for interpretation. The premise is direct: while Carl is commuting home late at night he tries to protect a woman from getting brutally assaulted, gets the guts knocked out of him in the process and wakes up from a coma in the hospital. Or does he? The story is formatted just as the character is feeling: disjointed, hallucinatory, discombobulated and more than a little confused. He eventually realizes, as we sometimes do when dreaming, that it is probably time to wake up and make breakfast. This leads to an ultimately dark prepostion: what if you can’t wake up? When I initially read the book, I was as perplexed as the character (and I suppose that’s the point), a little unsure of the direction and by the last few pages, asking myself “what’s the point?” The point is that there really is no point. Yup, it’s one of those. The book keeps a simple enough story line, so we can focus on the journey taking place in the mind, behind the scenes, between the lines. It isn’t about revealing some greater truth, the meaning of life, the existence of God, or detailing a massive character breakthrough. No, no, that’s all just nonsense. All this book wants to do is take you on a 200 page journey into a maze where nothing is what it seems, and the boundaries between dreams and reality are blurred. Oh ya – then once it drags you down into the murky waters of delusion, it’s going to leave you there to find your way out.

Slippers brought to you by Grandma.