Canada’s Royal Winnipeg Ballet serves up a faithful rendition of Romeo + Juliet without resorting to melodrama. The ladies brought it, but I couldn’t find my Romeo.

It’s a delicate balancing act when you’re dealing with such popular cannon. Canada’s Royal Winnipeg Ballet stays within the lines while making sure each scene is carefully trimmed to the essentials, which is always appreciated in a 2.5 hour ballet.

Vancouver native Sophie Lee’s debut as Juliet breathed new life into Shakespeare’s most famous tragic heroine. The Juliet I knew from popular cannon and film adaptations (and one annoyingly catchy Taylor Swift song) always felt a little dated to me. She was the archetypal damsel in distress, a voiceless entity whose body became the focus for the quarrels of men and the battlefields of powerful families.

Not this Juliet. Lee’s whimsical dance spoke of a girl on the verge of maturity, with all of the promise and naivety of youth. Juliet comes alive as passionate, playful, and fiercely loyal to her family – especially to her childhood Nurse and protective cousin, Tybalt. Her inner turmoil between puppy love and filial piety is clearly evident. Juliet is headstrong, intelligent, and takes a hand in shaping her own destiny.

The talent in Lee’s age-appropriate debut is breathtaking – I could not take my eyes off her whenever she was on stage. Lee clearly understands her character’s progression and gradual maturity. By Act 3, Juliet’s hesitant and playful airs are cast aside and a mature woman emerges, both hardened by sorrow and the reality of her situation. The supporting cast of female dancers were also well-executed. Juliet’s ‘entourage’ of ladies-in-waiting were graceful and unified; her Nurse showed a good range of comic relief. Well-danced, well-acted, and all-around pleasing to watch.

Romeo (Artjom Maksakov) and his two best buds, Mercutio and Benvolio, were certainly scoundrels, but they weren’t united in their numbers. I’m not a dance expert by any means, but even I noticed that the coordination between the three was slightly off. For dancing at this calibre, it was an unexpected disappointment.

Romeo in love was evident in his expressions, but unfortunately didn’t carry over to his movement, which felt awkward and incomplete. I just couldn’t picture Maksakov as a dashing young man capable of sweeping Juliet off her feet and causing her to go against her family’s wishes. While there was a fair amount of kissing and one near-naked bedding scene, I didn’t register much chemistry between the two of them. Romeo also seemed to lack the depth of character development that his counterpart displayed – from beginning to end, he was pretty much the same dude. And come on guys, this is Romeo we’re talking about.

Most of the other supporting male cast was just as dubious. It seems like Juliet just can’t win – her fiancee, Count Paris (Liam Caines) was graceful but seemed to struggle with the lifts. He was also perfectly bland and inoffensive, which I guess was supposed to make the audience more sympathetic towards Romeo. Honestly, it was like choosing the lesser of two evils – I would have gone with the unassuming but kind and rich guy, no problem. 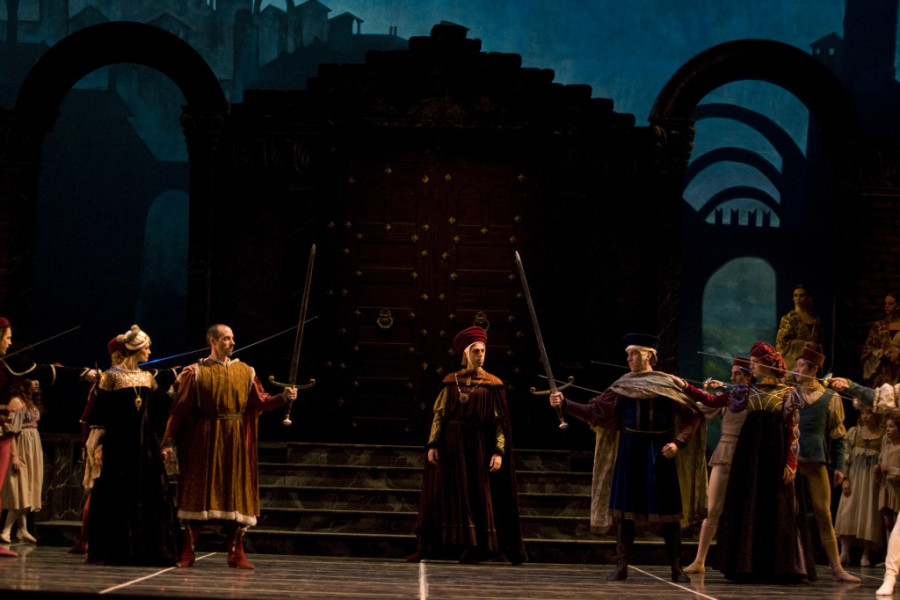 Tybalt (Thiago Dos Santos), as Juliet’s cousin, was the only stand-out. His quick, decisive dancing made it evident that he was all about the family. He was graceful and controlled, but exploded on stage during the dueling scenes. I found myself realizing that there are no ‘bad guys’ here, just two families caught up in an ongoing feud.

In short: I was bored by Juliet’s two ‘leading’ suitors. Santos was the only heart-a-fluttering performance on that stage. (Was it still illegal for cousins to marry in Shakespeare’s time?)

This was the final matinee performance of Romeo + Juliet from Winnipeg Ballet’s short stint in Vancouver. While I appreciate that their ‘A Team’ may have opened the show, it’s worrying that the company doesn’t seem to have much depth within their male contingent.

When you take on such a well-known story, you’ve got to have the gravitas to back it up. Aside from Juliet’s modern turn and Tybalt’s strong dancing, even elaborate costumes and stirring music couldn’t save this star-crossed show.