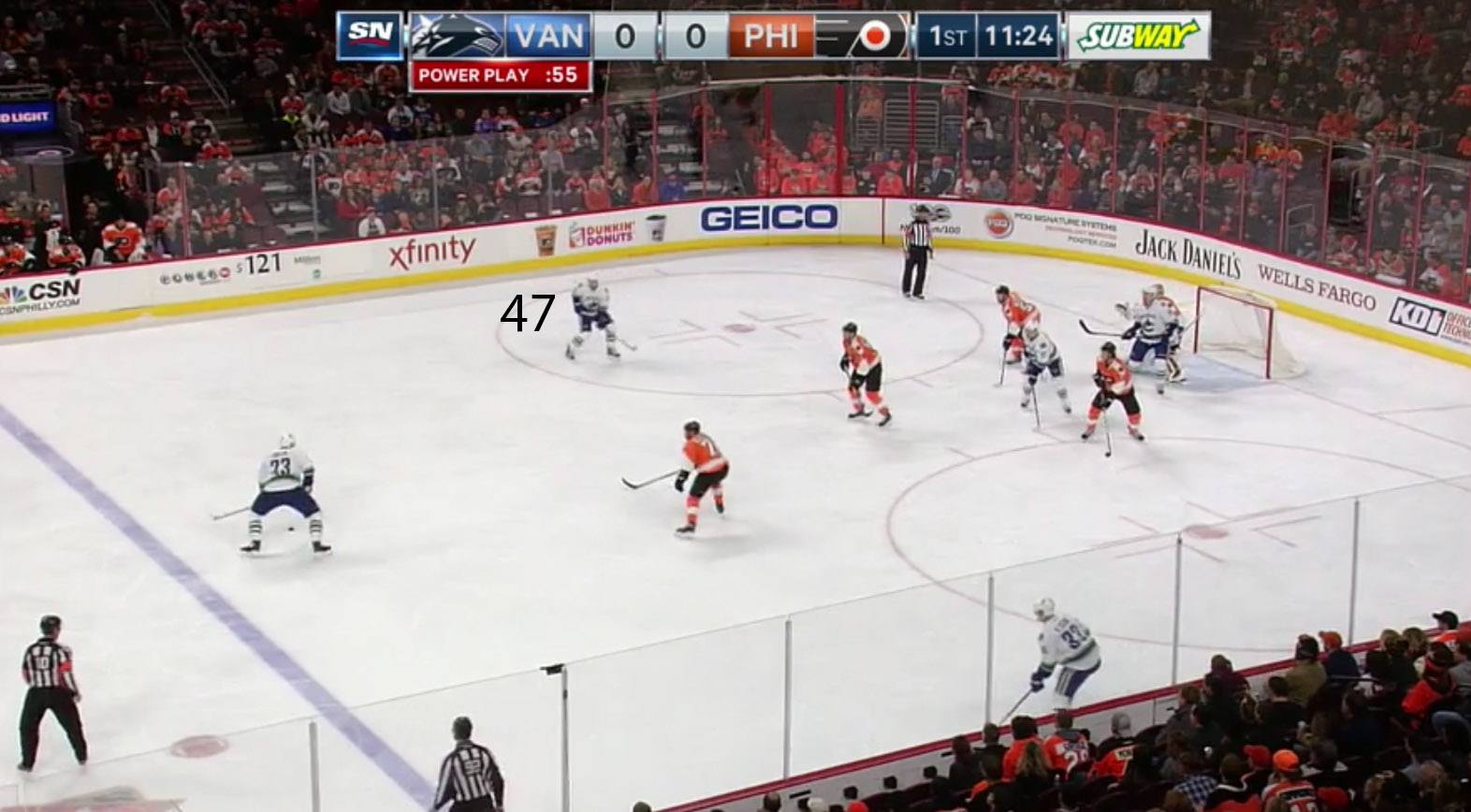 The summer and its subsequent outdoor festival season are upon us! With outdoor movies, night markets, car free days, farmer’s markets and a myriad of festivals going down every weekend, the foodies of Vancouver have their sights set on the relocated Food Cart Fest. Now located along the Seawall between Cambie Bridge and Olympic Village, I made a pilgrimage to the food cart mecca for their opening day. These were my findings.

First let’s discuss the new location. Located just off the Seawall, beside the VPD parking lot and in-front of Habitat Island, the new Food Cart Fest spot has benefits. It’s centrally located, easy to get there by bike, foot or transit and seems like a larger space than last year’s Waldorf locale. With the Seawall right there, it is a perfect spot to grab some grub and then go for a walk along one of Canada’s best pathways. 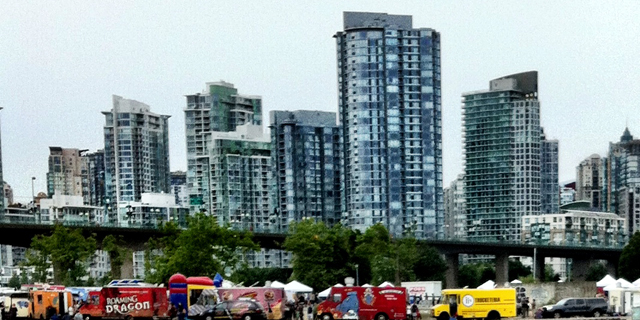 Once you get to the new spot, you might be surprised to find another change for 2013: a $2 admission fee. I personally find a $2 admission charge to be both a money grab by the organizers and against the spirit of street food ethos but since I bank with Vancity my $2 fee was waived (thanks Vancity!). I might even be ok with a $2 cover charge if the organizers provided more than six tables, a bouncy castle and some lackluster (and loud) DJs. However, in today’s world, convenience is a commodity and having over 15 food carts in one place equals an admission fee to a concrete lot and some porta potties overlooking beautiful False Creek.

Once safely past the door, a cornocopia of Vancouver food carts awaits. Food Cart Fest is literally a “who’s who” of the food cart scene, with veterans like Roaming Dragon nestled beside new upstarts like Reel Mac ‘N Cheese. The full rundown of opening weekend food carts looks a little something like this:

We got there just after 1:30 p.m. and the lineups were massive! The demand for top-notch favourites appeared to be far outpacing the food cart’s supply. We walked around to scope the damage and began to notice lots of sold out chatter. Sure enough, many carts had already crossed items off their menus. We stopped at Ze Bite, which had the smallest line-up, and decided to try the Moroccan Curry. It sounded enticing, with figs, chickpeas and a chunky tomato sauce draped over some couscous. The food came remarkably quick but we soon found out why. Despite the exotic ingredients, the dish was bland and lacking flavour. That being said, I like the cut of this truck’s jib, so I’d go back. I’d just order something completely different.

We got back on the train to flavour country with a stop at Soho Road and their famous Butter Chicken Wrap. This is one of my favourite food cart dishes and even with a 35 minute wait, the wrap was deliciously satisfying. The waiting around had definitely made us hungry, evidenced by the wrap getting devoured posthaste. 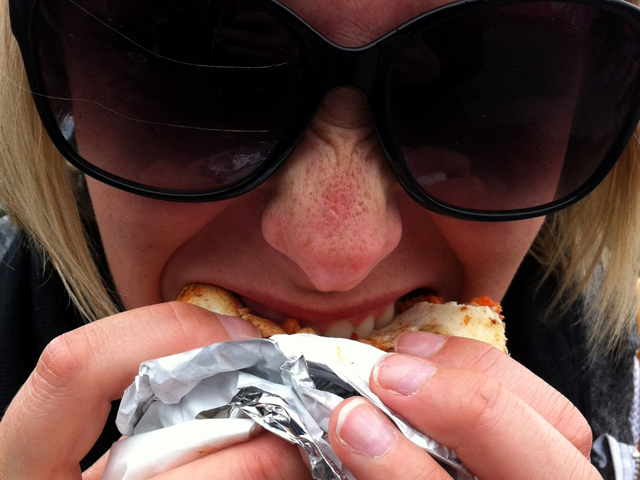 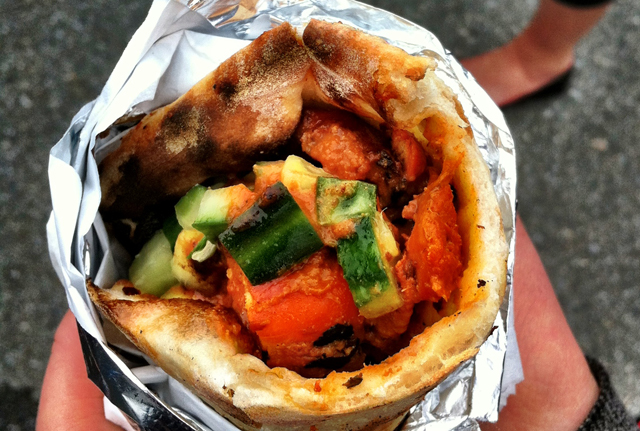 They have also created a new flavour sensation, the Mango Chicken Wrap, but were unfortunately sold-out of mango by the time we ordered. I love me some mango, so that was a crushing blow, but Soho Road is always so good it gives me something to look forward to when I visit them downtown and won’t have to wait as long.

We were still hungry so decided to brave another long wait. Despite my love for perogies and religious imagery, I’d never eaten at Holy Perogy. After surveying the menu I went with the Italian, which is cheddar cheese perogies topped with garlic, fresh tomatoes, parmesan and pesto sour cream. They told me they were out of the pesto sour cream and I would get sour cream instead, which didn’t break my heart, but I’m pretty sure the perogies I ate had pesto sour cream on them. And they were delicious. Take a look for yourself. 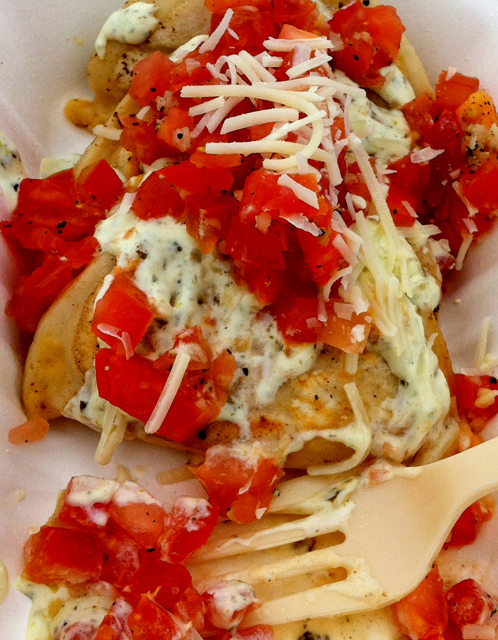 The perogies were great – they truly were. But a 45 to 50 minute wait? Is Baba making each order from scratch? Hopefully they can work on the wait times for future Food Cart Fests. Godspeed Holy Perogy.

We would have stopped by Johnny’s Pops for a little dessert but Vancouver’s best food bike had already sold his 600 popsicles for the day!! If you haven’t tried Johnny’s Pops yet, do yourself a flavour favour and get there early!

To recap, the food was pretty good due to some major food carts in attendance but the wait times, limited menus, lack of seating, crappy entertainment and competition from lots of other free weekend activities gives Food Cart Fest much to improve on. It seems like they are already taking the feedback to heart, with a promise of more food carts and less waiting for future dates. Much like the summer weather, I have confidence the Food Cart Fest will get better as we go.

Location: Along the Seawall, between Cambie Bridge and Olympic Village