After a performance that gained steady (sometimes explosive) momentum with every number, flamenco guitarist Paco Peña and his company received an enthusiastic standing ovation Saturday night. At the end of the show, a few audience members were even tapping their feet – in a rhythm reminiscent of the flamenco choreography performed by dancers Angel Muñoz and Yolanda Osuna Linares.

Born in the Andalucian city of Córdoba (southern Spain) in 1942, Paco Peña is a guitarist, composer, dramatist, and artistic mentor. He started learning guitar when he was six years old – his brother was his first teacher – and made his first professional appearance six years later. Since then Peña has released 30 albums and performed as a soloist on some of the biggest stages in London (Royal Albert Hall) and New York (Carnegie Hall).

In Flamencura (the title of Friday night’s show) Peña played alongside a hand-picked company including the above mentioned dancers, Inmaculada Rivero and Bernardo Miranda Luna as vocalists, Ignacio Lopez on percussion, and with Francisco Arriaga and Rafael Montilla joining him on guitar. The night’s ten compositions, according to the program, explored the “elusive state at the core of flamenco known as duende (soul).”

What is flamenco? Dr. Arianna Dagnino (writer and lecturer in the Department of French, Hispanic and Italian Studies at UBC) offered some clarity about the art form during a pre-show talk. She describes it as a “fluid phenomenon characterized by a diversified mix of influences – from Islamic music to Jewish Synagogue chants, from Afro-Caribbean rhythms to Punjabi singing… Flamenco’s interpretive and cathartic nature thus expresses both the suffering and the triumph of simply being alive.” 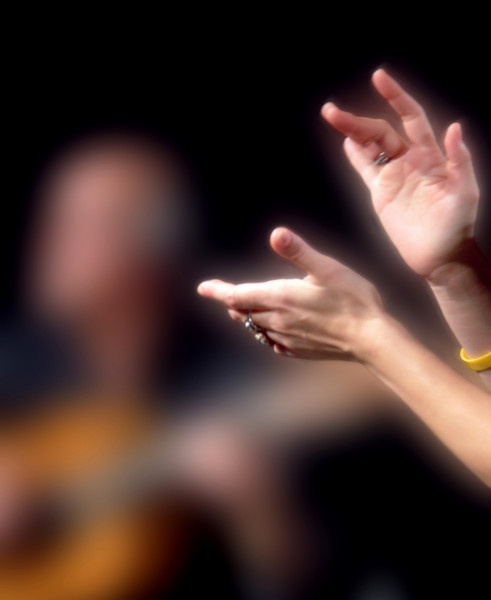 As audience members moved into the theatre, the stage lights shone over a single chair, draped with a floral shawl. The house lights dimmed and music started playing in the wings. After a minor false start, the eight performers walked onto the casually lit stage and played together in a semi-circle.

Their first collaboration felt surprisingly informal. The vocals were raw, the dancing was playful, and the gestures and vocalizations from the other members of the company seemed improvised. It felt like we had all stumbled into a private party. As the website states: “Flamenco performers… are always in pursuit of the inspiration that will allow them to get there, reaching total involvement in the art and deep communion with the audience.” The performers were, in essence, setting up the night. The audience was being to asked to be more than just spectators, becoming active participants in the magic that was about to take place on stage.

As the show continued, Peña performed a hypnotically easeful solo with the spotlight trained only on him. The voices of Rivero and Miranda Luna filled the theatre in impressive belts of resonance with each of the proceeding arrangements. The level of mastery and skill was overwhelming, and by the end of the night, some audience members were literally shouting “olé” over the applause. 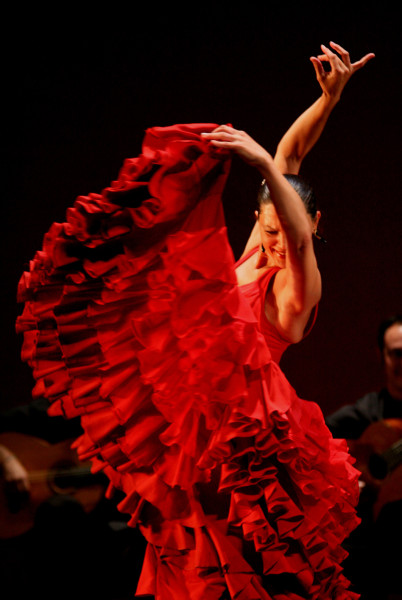 And then there were the dancers. For the most part, Munoz and Linares danced separately, but came together at the end of the first act in a sinister, foreboding, and seductive collaboration. To give you a bit of an idea, their dance revolved around a piece of black fabric which Linares wore over her face when she entered the stage. By the end of the song, Munoz was wearing that same piece of fabric over his face.

One of the most memorable costume pieces was the red dress that Linares wore in the second act of the show. Trailing behind her, the fabric felt like an extension of the choreography, and I swear I saw dust rising up off the stage with every kick. The flirtatious energy was pretty memorable as well. The dancers didn’t just play with the musicians, they also played with the audience. After a challenging series of steps in his second last appearance on stage, Muñoz playfully blew out a long exhale. “Whew. That was hard,” his smile seemed to say. He left the stage with a kiss extending out towards the auditorium. The audience went wild.​

Written for Vancity Buzz by @CMBissonnette