Ben Affleck, you might not like him for his acting, but when it comes to his directing — Gone Baby Gone, The Town — the mans a machine. Affleck returns to directing with what may be his best movie yet. In Argo, Affleck manages to create a film that combines a real sense of tension with a nice bit of fun to make one incredible experience.

Argo is an American political thriller based loosely on Tony Mendez’s account of the rescue of six U.S. diplomats. In 1979, during the Iranian Revolution, Islamic militants took over the U.S. embassy in Tehran and held 52 Americans hostage. Six of the Americans escape and hide in the Canadian ambassador’s home, but with each passing week, their safety wore thin.

Tony Mendez (Affleck), a long-time CIA operative who specialized in rescues, came up with the bright idea of flying into Tehran with fake passports in hand (provided by the Canadian government), for six people pretending to be a film crew scouting locations for a science-fiction action flick called “Argo”, a cheesy “Star Wars” rip-off which would have been hilarious if it had actually seen the light of day, (original Argo movie poster below). 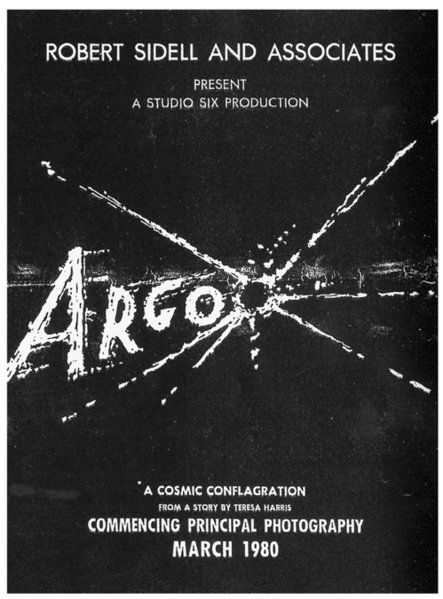 The idea was simple — walk right out the front door — get on a plane to Switzerland — and fly home to safety. As Mendez’s boss at the CIA (a commanding Bryan Cranston) puts it, “This is the best bad idea we have.”

A movie about the 1979 Iranian hostage crisis might not sound appealing. Taking on a film that’s based on a true story can be challenging, especially when it’s a story that’s known worldwide. People who already know about the story might not be interested in watching the film as they already know the outcome. But on the flip side, enough time has passed to hopefully bring in a new audience who may not be familiar with the story and enlightening them with a bit of “History”.

Affleck noted, “Because we say it’s based on a true story, rather than this is a true story, we’re allowed to take some dramatic license. There’s a spirit of truth.” Affleck changed the postscript enough that people, who may know the story, will still be on the edge of their seats. Argo has a lot of heart and a surprising amount of humor. It molds together brilliant direction, suspense, a dynamic screenplay and skilled acting. Affleck uses editing techniques such as quick cuts to help build the action and suspense throughout the duration of the film and intertwines real life footage with reenactments — the similarities are amazing, you truly feel as if you’re reliving the horrific standoff.

The cast here works very well and features quite a few familiar faces. Not only is Affleck at the directing helm, he also takes the lead role, but I assure you, this is not Reindeer Games. His acting skills have steadily improved with each new role over the last few years and he truly delivers the goods. With 120 speaking parts, everyone from Kyle Chandler (Friday Night Lights) and Tate Donovan (Damages) to Clea DuVall (The Faculty) all perform incredibly well.  Most notable is Breaking Bad’s Bryan Cranston (Jack O’Donnell), who is always good in everything he does, and here is no different. Alan Arkin (Little Miss Sunshine) and John Goodman (The Artist) provide most of the fun and humorous moments throughout the film. They really add spark to the serious subject matter. I would have loved to see more of them throughout the film, but when you do, it’s nothing short of  brilliance and worth every minute.

In the end Argo gets it right, from the script, to the acting, to the directing, It’s the must see film of the year. To this day the story stands as an enduring model of international co-operation between governments, which is why I give Argo a 8/10.