The appeal of steam punk lies in the grandeur of the fashion and the elaborate potential with decor. Gold, gears, ruffles and gadgets all speak of an alternate existence without the human preference for the combustion engine.

The power of hypnosis has always intrigued me. The concept of delving deep into another layer of our brains and manipulating the inner psyche is a bewildering concept, especially considering that a hypnosis show is manipulating this brain matter for our entertainment. 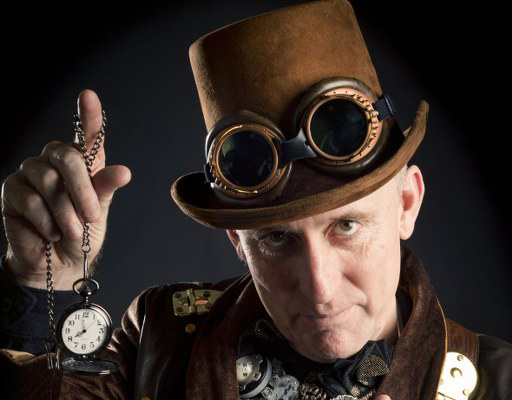 The Harlequin Hypnosis Show was endorsed with an incredible amount of hype. So much so, that I was pretty much convinced it was either incredibly deserving or desperately trying to convince us it deserved the hype. I regret to say it was the latter.

We were led into the theatre of the Orpheum Annex and paraded past a table of steam punk accessories and baubles for sale. Audience members were encouraged to dress “steam punky” with the promise of a costume competition. Of the 200 people in attendance, the 10 people adorned in full regalia joined the crew on the stage and the crowd voted a winner. Then the process of selecting the hypnosis participants began.

To the pre-recorded sounds of waves washing up on a beach, they begin the process of placing our entertainment for the evening into a state of hypnosis. Quickly those that leave their minds open to suggestion fall the fastest and those who are unable to let go return to their seats.

As the show begins we are introduced to a the character Katie, the neglected girl left at home while her father goes on whirlwind adventures with her older sister. She is meant to be our guide through the evening but becomes little more than an annoying plot line without a purpose. 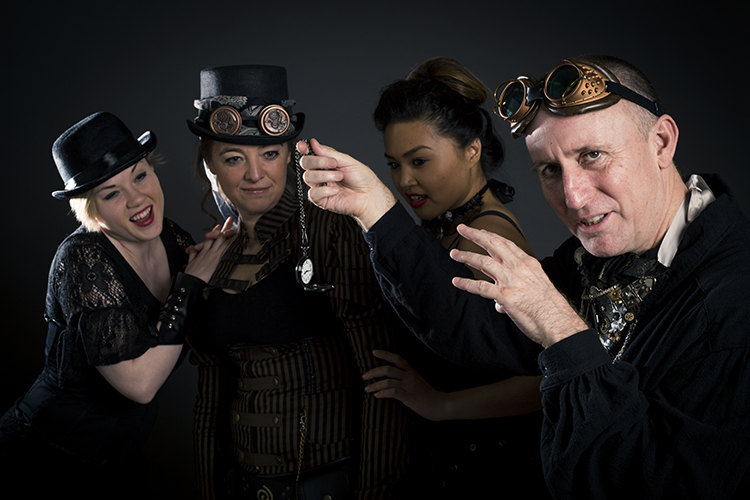 As we are on a search for Katie, we use her as an excuse to make the participants perform ridiculous things. As an example, “Look, I think Katie is on that island!” Upon which we spend the next 15 minutes making the hypnotized row an imaginary boat or look through a spyglass in search of her. This concept grows old very fast as can be witnessed by the dozen people who walked out of the performance before the end.

As I myself was once hypnotized, I can tell you it is a bizarre experience. However, once you disconnect from the state of being hypnotized back into reality, it is a slippery and impossible slope to jump right back into it. It became clear that a number of the participants were not fully under and were attempting to leave the stage when they were asked what they were doing and more than a few responded with, “This isn’t working” or “I’m going to go sit down.” No doubt this was the strongest pitfall to the Harlequin Hypnosis Show, I just don’t think they’re very good at it.

Aside from the characters forgetting their stage names and the obvious lack of flow and timing, this show had the intention to be very good. The concept was very good as were the theme and costumes. The story line was poorly executed for an adult audience and left myself and my partner in crime feeling relieved it was over. Overall, my initial impressions of the level of hype being used to boost the expectations of the show were spot on.