Fighting Chance Productions’ “Carrie: The Musical” is well worth watching for the fine performances, and fans of the source material should get a kick out of the musical version of the beloved horror/tragedy.

If you can’t get enough Carrie, you’ll appreciate seeing these characters brought to life by the very talented cast, and it’s fun to see how director Ryan Mooney pulls off telekinesis effects on a bare-bones stage and budget.

Adapted by Lawrence D. Cohen, with a score by Michael Gore, “Carrie: The Musical,” based on the Stephen King novel (also adapted into at least three movies) tells the morbid tale of a tormented high school girl who develops telekinetic powers for unexplained reasons, with deadly consequences – although it’s implied her powers come on through sheer force of will, fuelled by her extreme pain and anger.

Carrie White is an awkward, cripplingly shy high school senior, deeply sheltered thanks to her mentally ill, fanatically religious mother Margaret. The musical adaptation introduces Carrie in the infamous shower scene – while showering with the other girls after gym class, Carrie is terrified by her first-ever period, which is unusually heavy, and to make matters worse, her mother never warned her it would eventually come. The other girls, led by queen-bee Chris Hargensen, viciously pelt her with insults and feminine products. 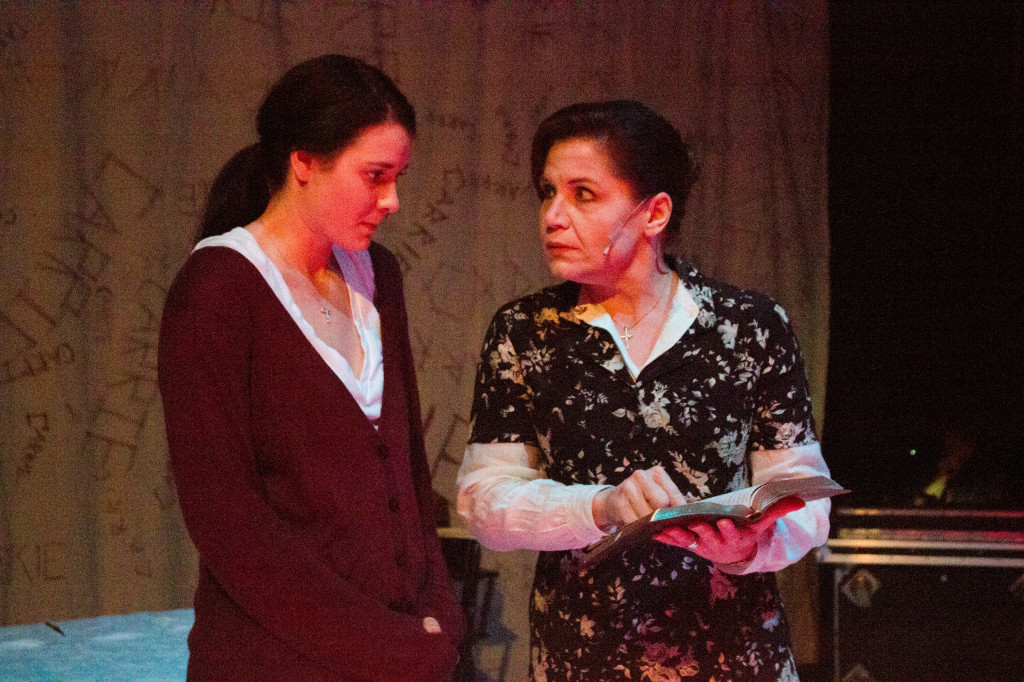 Carrie returns home traumatized and finds no comfort in her mother, who beats and locks Carrie in the closet, spewing Biblical nonsense about the sin of womanhood and professing to be spurred by a mother’s love. It is within the closet that Carrie’s extreme emotional state manifests in a telekinetic event – in this adaptation, she levitates a crucifix.

The gym teacher, Miss Gardiner, confronts the girls, compelling them to apologize to Carrie the next day. Chris refuses and begins plotting her revenge, while another girl, Sue Snell,  vows to right the wrongs she helped perpetrate against Carrie. Meanwhile, Carrie is developing her powers.

The rest is pretty well-known, but nevertheless…

The two girls’ plots, for good or for evil, culminate in another iconic scene – the bloody prom – where, thanks to Sue’s ministrations, Carrie is allowed to believe she has finally found the acceptance she desperately craves, just as Chris executes her revenge. Carrie is humiliated, then overcome by a supernatural rage that lays waste to the entire school.

As Carrie, Ranae Miller, with her stooped posture and twitchy movements, is excellent – and so is her singing. She’s even likable (not necessarily required), while maintaining Carrie’s undercurrent of sadness even as she rebels against her mother and tries to come out of her shell at prom. When she snaps, Miller’s character work up to that point, as well as her uncontainable, trance-like shock afterwards, help this moment pay off just as well in this version as in the original movie, without the aid of Hollywood effects. 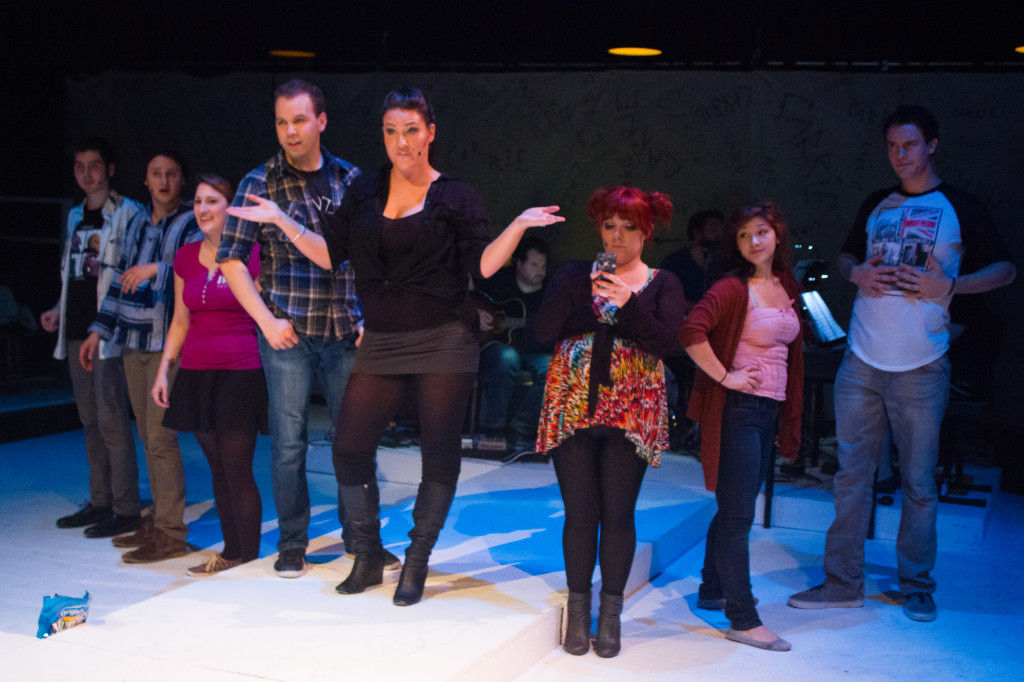 Emily Canavan gives a standout performance as Chris, relishing her badness and delivering her bullying lines so nastily, you might actually wince. She can growl and pull off sassy runs, a great singing-counterpoint to Miller’s clear-voiced, precious Carrie.

Tegan Verheul turns in a fine performance expressing Sue Snell’s repentance, determination and ultimately grief with equal ability. As Sue, Verheul is whom the audience would like to imagine they would have the courage to be – whose good intentions are just too little, too late.

All the acting is believable, for that matter; nobody’s pushing.

Sabrina Prada is Margaret White, and her singing is incredible. She finds shrieky, panicked tones as well as deep, dark, resonant ones, evoking all the melodrama and gravitas of the Bible. Her fears of God, and of Carrie, and of the outside world, are palpable. 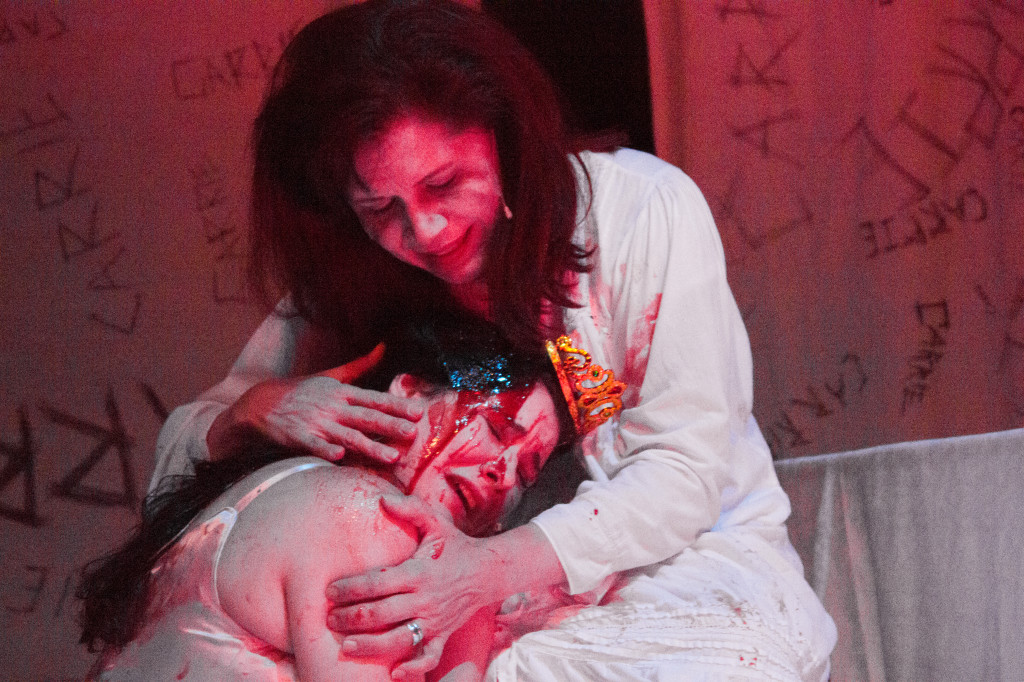 Miller and Prada as the codependent White women. Photo by Allyson Fournier.

Prada acts this note perfectly well, but she and Mooney lean too hard on this one facet of Margaret. Margaret is a creature of fear, yes, but also of hellish rage. She hates Carrie, who was herself conceived in an act of hatred: Margaret’s rape by Carrie’s absent father. Carrie is a permanent reminder of that trauma. As much as Margaret claims to love her daughter, she also has to loathe her. It’s Margaret’s unpredictable tendency to vacillate between extremes that makes her frightening. Prada’s Margaret beats and berates Carrie apologetically, rather than being swept away in moments of madness only to chillingly repent. She should be a wild and terrifying example of the manic shut-in Carrie might become if she doesn’t socialize, using religion to justify her jealousy of Carrie’s glimmer of opportunity to leave the codependent relationship and sexually awaken. I believe this would have added nuance, rather than reduced her to a problematic “scary crazy person” caricature.

These sides of Margaret get lost in the production’s presentation of fanaticism and the over-emphasis on Margaret’s victimhood. This Margaret is pitiful, not scary. Prada is good, but her tremulousness is a weaker choice for the character. The story doesn’t need another underdog like it needs a villain. Mooney’s production has mistakenly made Chris the main antagonist. Chris is mean, sure, but her tragedy is mainly about being the insecure bully who pushes Carrie’s psychological frailty too far and may not really deserve to die for it – frailty owing to Margaret’s lifelong abuse.

My other quibble is with the musical itself. “Carrie” endures as a horror masterpiece because it is massively relatable. Everyone has felt like Carrie, Chris, Sue, or all three, or stood idly by and watched high school abuse. In that regard, it’s not very deep – it’s “popcorn pathos,” if you will – so the audience’s emotional response has to be rooted in filling in the blanks with their sympathy and their own memories of similar experiences; the things they did, the things they didn’t do and wish they had. Having these characters singing out their inner thoughts in Dean Pitchford’s awkwardly literal lyrics eliminates the audience’s ability to fill anything in, sapping the show of emotion. Plus, singing in a musical should be a response to experiencing feelings so strongly, and/or of such great complexity, that they cannot be expressed any other way than by the heightened act of singing. There’s just not really enough of that kind of subtlety in the source material to justify a musical adaptation.

The sparse set – a blank white room with a raised dais in the middle shaped like a cross, and scrawled all over with the show’s title (designed by Mooney) – makes effectively creepy use of the Jericho Arts Centre’s smallish space without ambitiously overreaching, which might otherwise have made the “thread”bare (pun intended) effects seem cheesy. 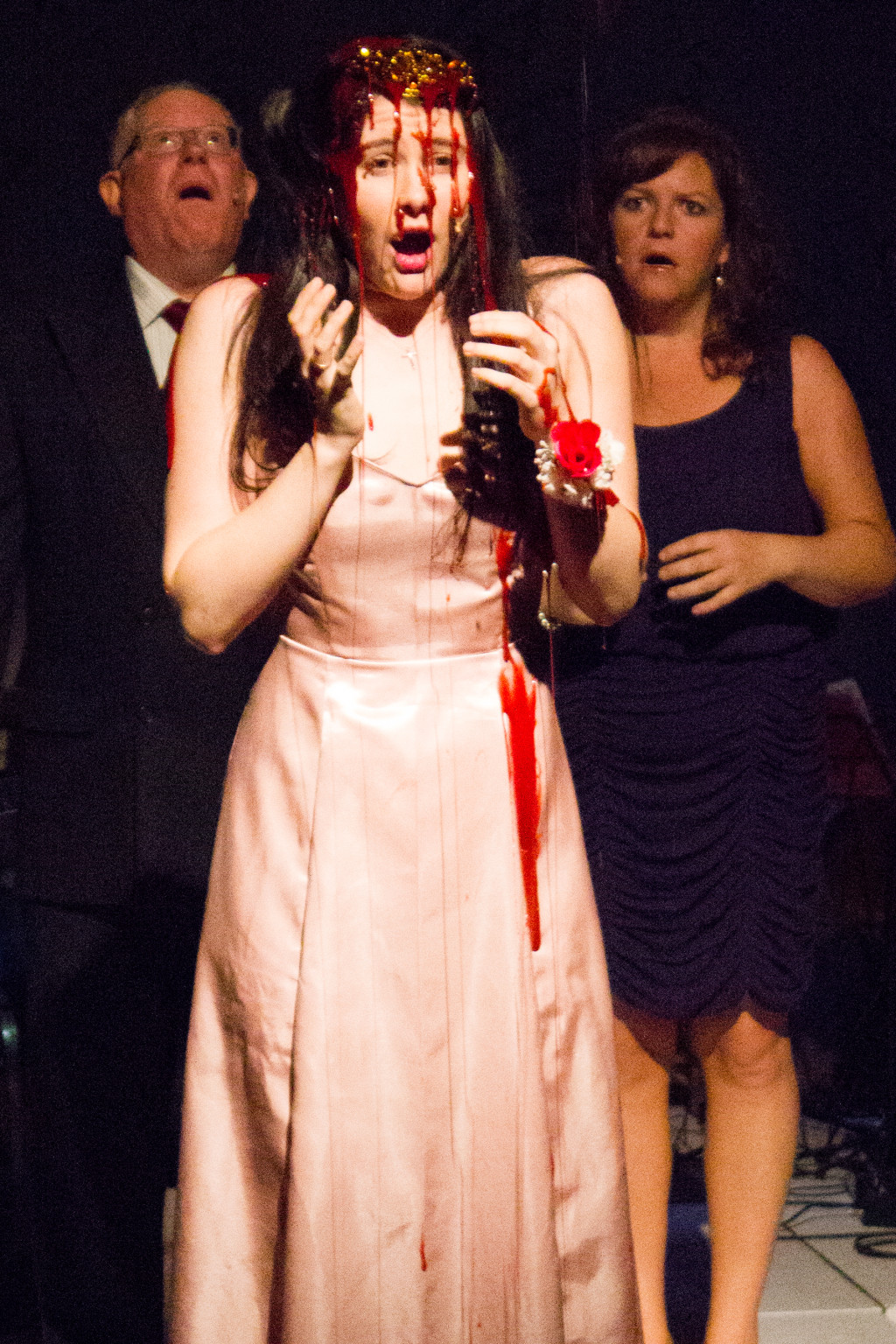 Ranae Miller, as Carrie, in the infamous climax. Photo by Allyson Fournier.

A couple minor technical things – someone needs to steam Carrie’s prom dress and take in the bodice to fit Miller. And the door to Margaret White’s punishment closet – another memorable icon from the book and movies – is mimed, which is rather immersion-breaking.

Fighting Chance is in its eighth season, with over 30 shows under its belt – time to buff out the small details.

Nevertheless, Fighting Chance Productions’ musical “Carrie” may be well-worn territory, but thanks to a great cast, it’s never boring. Devotees to this cult classic will definitely appreciate this take on it, featuring superb local talent and the novelty of the singing.