Sitting with Vancouver’s Simon King outside of 49th Parallel on Main Street, it is clear that his reputation for being one of the fastest talkers in comedy is warranted.

“I’ve been a stand-up for over 15 years and an entertainer for 30 years… When you say it out loud, all of a sudden you think, ‘How can it be? I’m only 20… oh wait, no I’m not,” Simon said in between drinking coffee and fits of laughter.

Simon King is back in town from London, England for two shows Saturday night at Little Mountain Gallery, appropriately titled Back for a Bit. For a comedian whose Twitter handle is @unfamous, Simon King has carved out an international following for himself. He has performed at Just For Laughs in Montreal, HBO’s The Comedy Festival in Aspen, Colorado, and moved to London earlier this year in search of new laughs.

“I wanted to keep growing, to find new audiences to perform for,” said Simon. “As a comic, I always want to get better and England represented many new opportunities.”

“London has a massive comedy scene, and the scene was really accepting of me. They have a different respect for comedy. They don’t have anyone doing the social and political material like I do.”

Vancouver is Simon’s home scene though, and he loves how comedy in the city is flourishing.

“We have such a good comedy scene here in Vancouver,” said Simon. “There are so many great rooms right now, and many different styles of comedy here.

“Vancouver’s audiences are notoriously tough. This is a city that makes things just hard enough that comedians have to be good to succeed.”

“A common tip passed along to new comedians is ‘slow down’. Simon goes in the complete opposite direction,” said Colin. “Over the course of hundreds and hundreds of shows, the most impressive thing I’ve ever seen was when Simon got 50 audience members in a rowdy Fort McMurray bar to follow him to another place so he could give them the show they deserved. That’s the magnetism that his performance has.”

And how does Simon describe his own comedy style? “Optimistically frustrated.”

“There are two types of comic styles: internal and external. What you want is a blend of the two,” said Simon. “I find that I am more philosophical now. I have a better set of tools to get my message across.

“Comedy doesn’t have to be ‘I’m right and you’re wrong.’”

Simon King is Back For A Bit takes place Saturday, August 15 at Little Mountain Gallery. For more information visit: www.backforabit.com 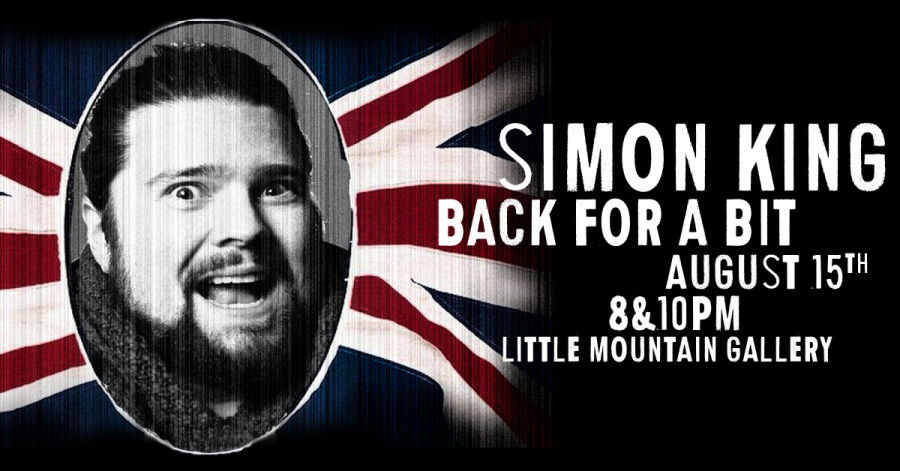