The biggest cruelty of being a dog owner is that their lives are so short in comparison to our own.

After the rambunctious days of puppyhood are over, we watch our four-legged family members become more mature, and slow down. Runs become jogs and, over time, stiff-legged waddles.

And then, the heartbreak of knowing it is time to say goodbye.

For the past few years, photographer Pete Thorne has been traveling Canada photographing dogs in their senior years.

The “Old Faithful” project, just released as a coffee table book, is a touching tribute to aging animals, and his photos beautifully capture the dignity and elegance of a greying muzzle.

Instead of being saddened by their limited days left on this earth, Pete memorializes these special animals so their owners can have something to remember them when they are gone.

One of his subjects, Piper, just passed away in Vancouver. She was 17. 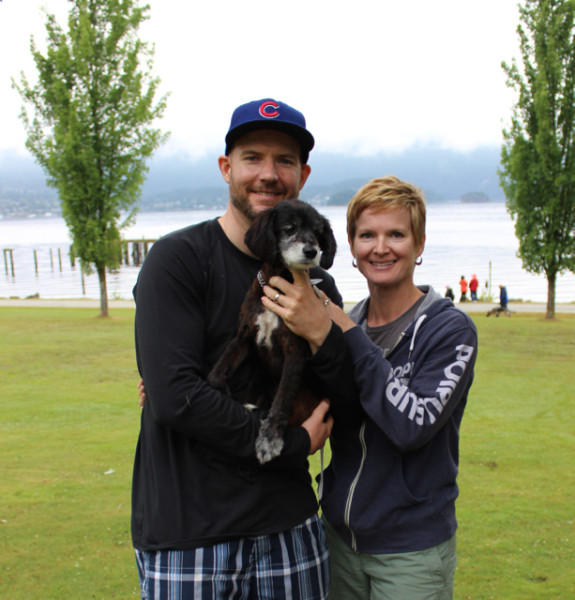 Owners Kelly and Jim Burt shared their story with Vancity Buzz, in their own words, and it is truly a testament to the power of love we have for our animals.

Jim: My wife Kelly and I wanted to get a dog to complete our family. We both had dogs growing up and knew what they could bring to someone’s life. As I was walking out of the Surrey SPCA I saw a little face staring at me from behind a cage. I asked about the dog and after finally being able to get in contact with my wife, Piper entered our lives. 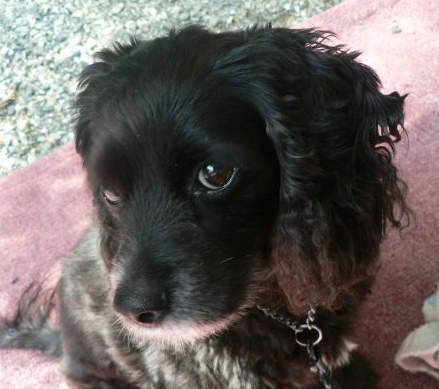 For the next 17 years, Piper Jones brought us pure joy, laughter and, most of all, unconditional love. She was there for any important event in our lives. She slept at our feet as Kelly and I got married in 2001. She was with Kelly all through her schooling, be it her Master’s Degree, or more recently when she obtained her doctorate degree. We always joked that Kelly should have taken Piper across the stage at her graduation to accept her degree so she would be an honorary Dr. Jones.

Kelly: As a younger dog, Piper was energetic and fast. She loved long walks. When we lived in Port Moody, we would often take her for long walks in Belcarra or around Buntzen Lake. We used to let her run wild out there. She would swim at Rocky Point Park in a little creek that ran into the inlet. When we lived in Surrey, her favourite walk was around the bird sanctuary off King George and Hwy 99. Recently, in 2014, we connected with a group of friends who are also owners of little dogs – we called it the “little dog group.” We would go walking together all over the Greater Vancouver area and a favourite place was Barnet Marine Park. We would meet for walks and have picnics together. 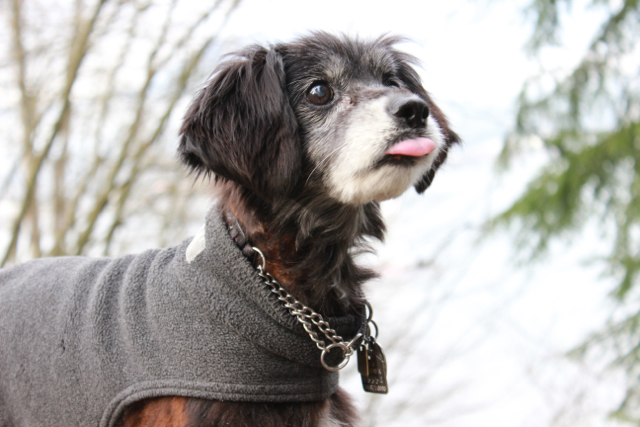 Piper was an easy dog, you could say, but she definitely had her quirks! For example, Jim’s parents were her caregivers when we would go away on vacation. “Gangy and Pop-Pop” (as we call them) loved having Piper around, but she did not like it when Pop-Pop wore his runners in the house, making squeaky noises on the linoleum floor. Often times, she was a difficult eater. Her absolute favourite treats were apples, cantaloupe and watermelon. Every evening I would prepare sliced apples for our lunch for work the next day. This is when she would get the “apple crazies” and be at my feet, looking up at me with her big eyes and waiting for her slice of apple. 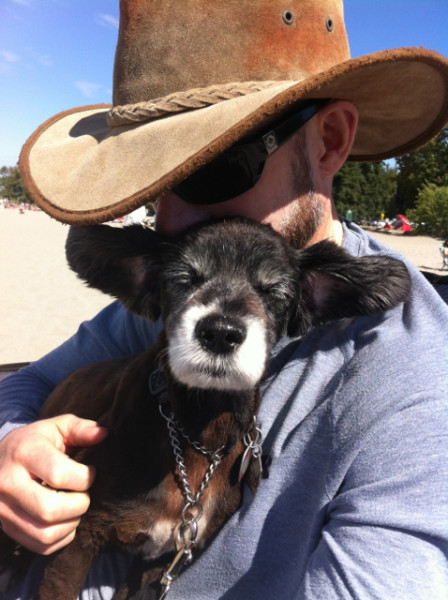 Kelly and Jim: Piper was a stoic little dog who had a couple of different health concerns growing up but with great care and advice from our veterinarians at Scottsdale Veterinary Clinic, Piper just kept going. She had liver disease and thyroid disease for several years.  About eight years ago, she started to lose her fur. She used to have a fluffy, luxurious black coat. As the years passed, her fur started to grow in little black tufts out of a reddish undercoat. On her daily walks, someone in the neighbourhood would stop and say: ‘My, isn’t that an interesting coat?’ I think it was a nice way of saying her fur was strange. Over the past few years we added eye drops to her daily regimen, along with her prescriptions for liver and thyroid, vitamin supplements and she began also to have recurring skin infections.  No worry – just needed another antibiotic shot of Convenia from the vet! Because of her health concerns that started quite young, this is another reason why we are so grateful for the 17 years we had with her. 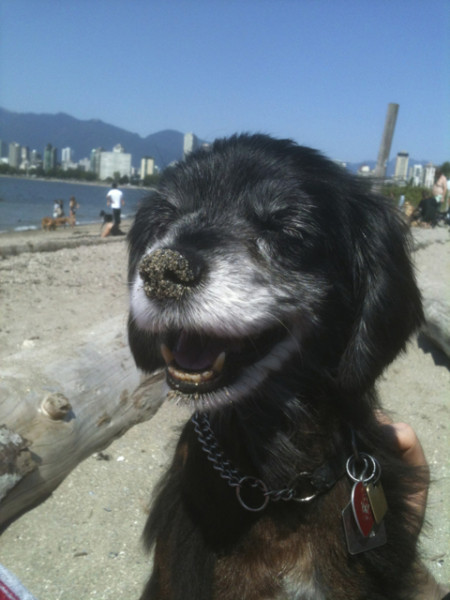 Jim: One day this past year I saw something on Twitter requesting a call for old dogs to be photographed in Vancouver. We thought what a nice way to capture our girl, as she was getting a little greyer and slower. We had no idea that the pictures would be included in the book and we were thrilled when Piper was chosen for the book from dogs right across Canada. 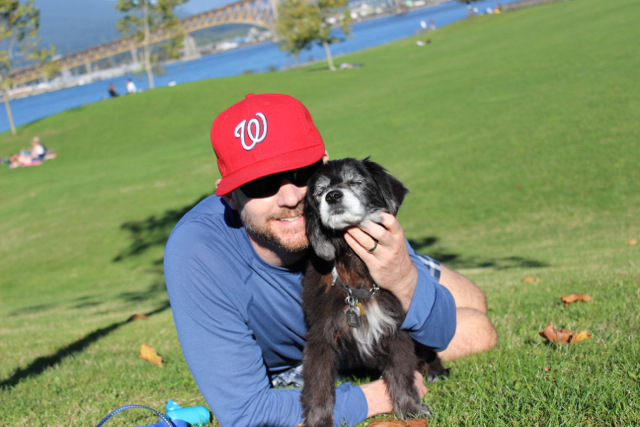 Over the past six to eight weeks Piper started to get a little slower. Her hearing was going along with her eyesight. She suffered a massive seizure about a month ago and we thought this might be it but little Piper Jones once again defeated all odds and bounced back. This past week however she stopped eating all her food and was having trouble getting comfortable. On December 5 she declined quickly so we booked an appointment with the vet. Piper once again left me a gift in that although I knew this day was coming one day, I didn’t know how I would prepare for it. At the time I had no idea that our little dog would not be coming home with us so there was no time to think about it. The vet examined her and advised that it was time. Piper was frail and tired. The vet asked if we would like to say our goodbyes and avoid watching the actual procedure but there was no way we were going to leave our little girl alone. So with her in our arms she took her last breath and we said goodbye to our little dog.

We have no other way to explain the grief we feel other than saying it is like the death of a close family member. The initial days were wave after wave of uncontrollable grief but the time between these waves is starting to subside. Wonderful memories now are starting to take over. We know we will always miss her. One of the most enjoyable times in my day would be walking down our apartment hallway at the end of the day knowing my wife and little dog were waiting for me, my family.

So times like that will be difficult but we would never give up the years we had with her and maybe one day in the future another little face will look up at us again. 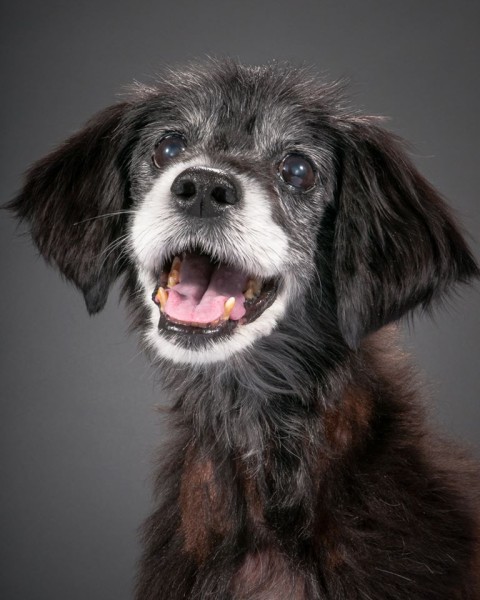