Fostering an animal from a shelter is great because it allows that pet to get love and socialization in a home while awaiting adoption. It also frees up space for the rescue to take in another needy animal.

For years, this is what long-time SPCA volunteer Anne Seward and her husband did – taking in unwanted and sometimes neglected animals. The journey could be a sad one – it’s hard to give them up once you’ve nursed them back to health – but Anne found comfort knowing they were going to a good home.

Enter Renny, a senior dog seized as part of a cruelty probe by the SPCA. The massive white Boxer cowered in her kennel and wouldn’t eat. Staff believed she was deaf – as many white Boxers are – because she wouldn’t respond to people. Anne took the dog home and “they immediately fell in love.”

The SPCA and SAINTS, a non-profit sanctuary in Mission that takes in old, sick and disabled animals, gave Anne two options: either send the senior to the farm to live out her days, or take her in permanently. She chose the latter.

In this edition of “Rescue Me,” Anne tells the story of how she became a “foster failure,” in her own words, and how the experience has opened her home – and her heart – to other senior dogs. 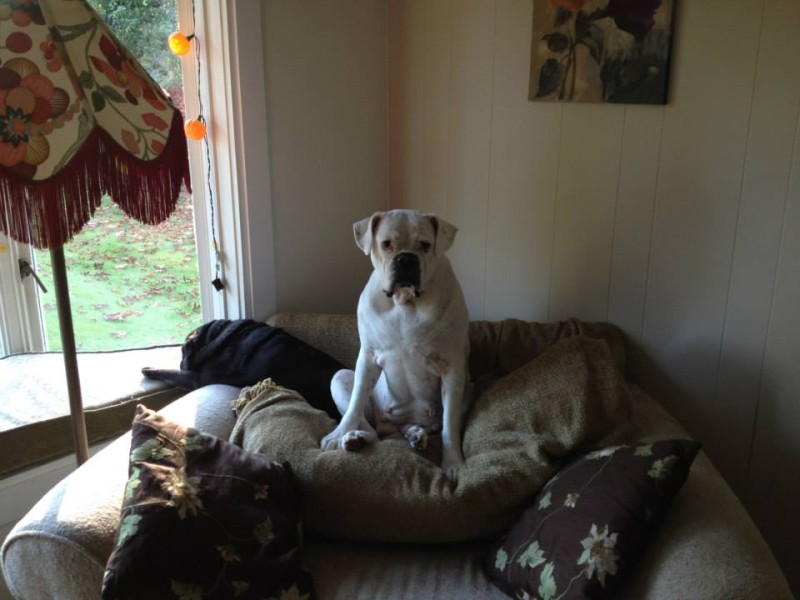 Although I had never “failed” at fostering, this was a no-brainer. Renny had already been in two shelters before she came to stay in our home, and she had just started to settle in and feel safe. She had already proven to be the most gentle, affectionate, playful, loving girl we had ever had the pleasure of caring for. We started a permanent foster with Renny in September of 2013, and we fell hard for her. We discovered her hearing was quite good. I believe she wasn’t responding to sound because she was stressed and distracted.

I started volunteering at SAINTS in November of 2013 after touring the facility and witnessing the important work they were doing there. 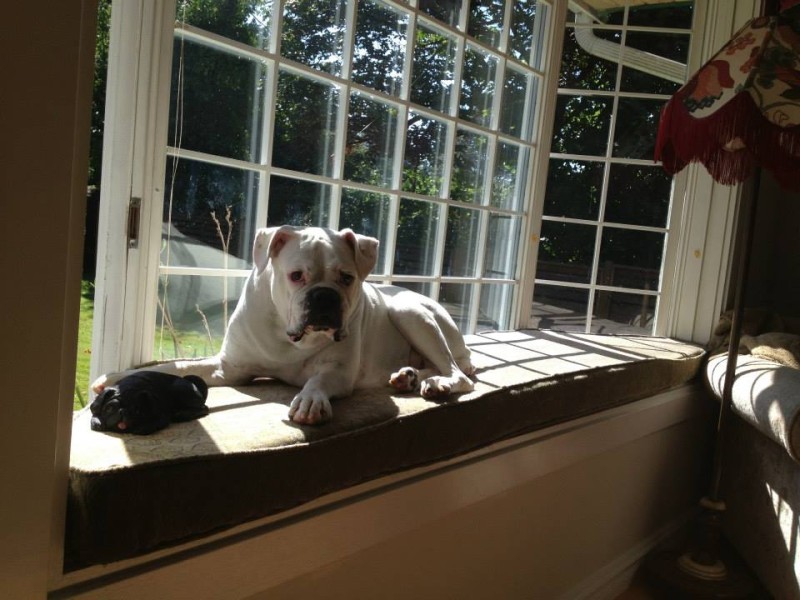 Renny in her favourite window seat.

As for Renny, she became attached to me and followed me everywhere. She would jump up on the bay window seat when we would leave the house, and she was quite an imposing figure there. We looked forward to seeing her in the window when we arrived home. She would jump down and hop around us with excitement when we came in the door. She curled up with us for TV nights and would slowly take over the couch. Sometimes my husband and I didn’t have the heart to move her and would lay on the floor ourselves. When we went for walks there would be no need for a leash (although we used one) because she stayed right beside us. Her appetite was insatiable, far from the dog who wouldn’t touch her food in the shelter. 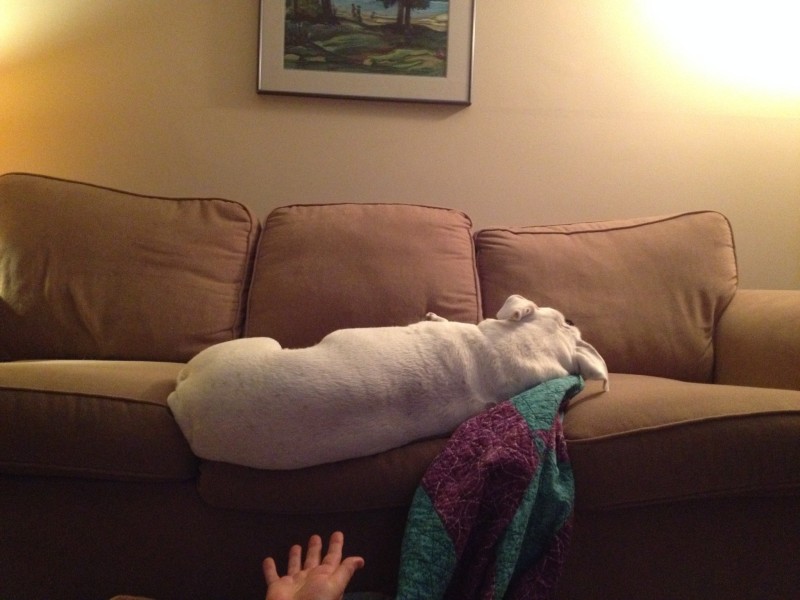 Renny taking over the couch.

Renny grew a mast cell tumour in the fall of 2014, and we had to let her go on, of all days, Boxing Day. We had known we wouldn’t have much time with her, but that didn’t make it any less painful to watch her in her illness. I still look for her on the window seat every day. I can’t imagine loving her more if we had raised her from a puppy. She came to us as a nervous, distrustful girl and blossomed into a loving and much-loved member of our family. She went out peacefully in our arms feeling our love and tears.

While Renny was still alive I met Brandy, a 16-year-old collie mix at SAINTS who had been surrendered by her family due to a move. I can’t imagine what kind of confusion she would have been feeling being dropped off by the family she had spent her life with to face a whole new world with unfamiliar animals and people and sounds. My husband and I brought her home and she is so sweet and unassuming. 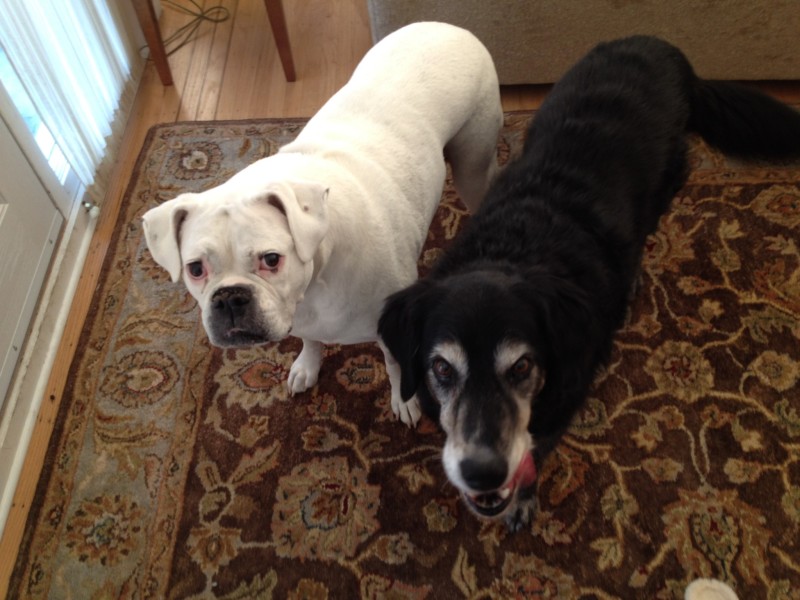 Many people tell me that they could never foster an animal only to see it go to another home. For me, the animal’s welfare comes first. Whether they live out their lives in my home or I am just a part of their journey to their forever home, if they are happy and healthy then I am happy.

As for permanent fostering through SAINTS, I get to love the animals that, for the most part, have had a difficult start to life, and love them until the end. My last “bought” puppy was from a breeder, before I knew anything about animal rescue. Starting from “scratch” doesn’t guarantee the perfect dog. We paid $2,000 for our Pug and he brought us joy, but there were many health issues that came up along the way. 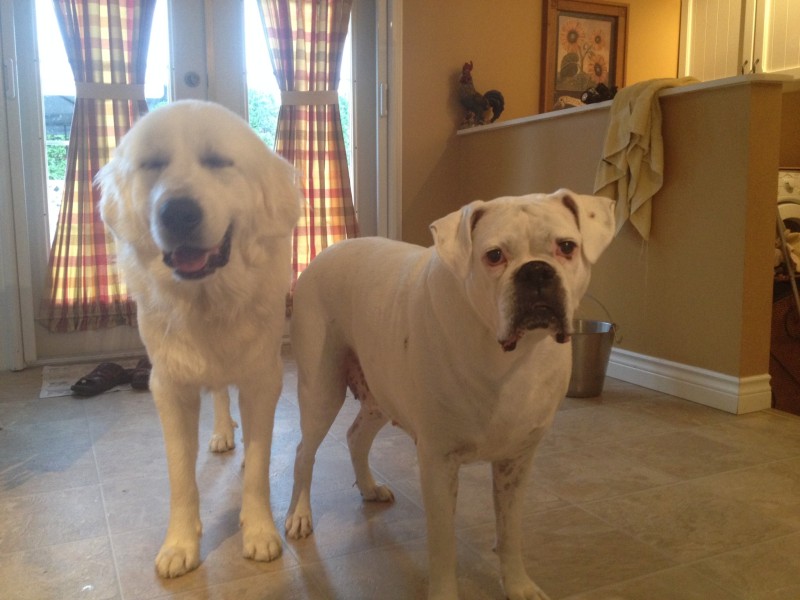 Renny with an SPCA foster.

Since I have been fostering, I realize there are so many mix-breed dogs that I never would have thought of having as a pet, but after having a myriad of breeds in our home and getting to know these amazing creatures, I wouldn’t buy from a breeder again. The older rescue dogs are established in their personalities, and any hereditary health issues will have already showed up.

I consider it an honour to make the last years of an animal’s life the best, and to see them through when it’s their time to go. I have laid down with many animals at that sacred moment when they take their final breaths, and I comfort them and make them feel safe and peaceful. I take comfort in knowing I have made their last years the best of their lives.

If you’re interested in learning more about what SAINTS is about, watch this video. And if you’re interested in their public tours, donating or volunteer opportunities, check out their website. They’re also doing a fundraiser dinner to help cover the massive vet bills they incur taking care of these old souls. They really do amazing work for these lovely animals. 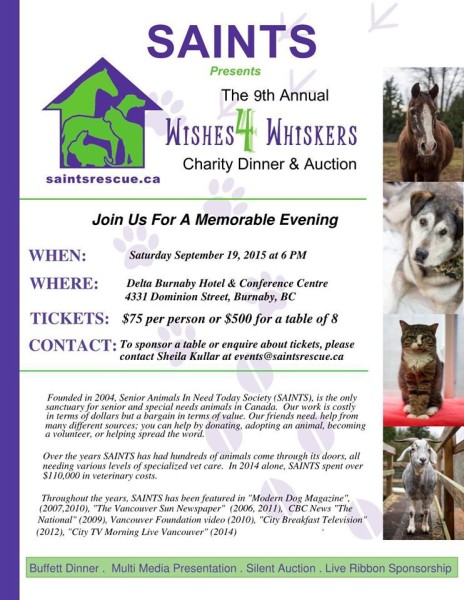