Late in the 19th century, the provincial government acknowledged that British Columbia was in need of a university. It chose one of the most beautiful locations to build the University of British Columbia, the westernmost tip of the Vancouver peninsula on the edge of cliffs overlooking the sea with panoramic mountain views. The original 1912 vision for UBC was to build a campus with architecture worthy of its beautiful location.

UBC was founded in 1908 and the construction of its permanent campus buildings began soon after. The Point Grey site on the Vancouver Westside was chosen in 1910 and architectural visions for the campus were quickly developed. However, construction was halted in 1914 with the outbreak of the First World War. UBC remained at the former McGill University College campus in South False Creek at Vancouver Fairview until 1925 when the University’s first campus buildings in Point Grey were completed in 1925.

Lectures began at Point Grey in the September of that year with the construction of the Library (which is now known as the Irving K. Barber Learning Centre) and the Science and Power House buildings. All other campus buildings constructed that year were only meant to be temporary, but some of these structures still exist today and house entire departments, specifically Geography and Mathematics.

Students played a major role in building their 1925 Point Grey campus. In 1922, students marched down Vancouver’s city streets in their campaign to “Build the University.” They argued UBC was in need of a proper campus, that the University and its students were suffering and that existing facilities were not meeting the academic needs of the fast growing city and province.

The provincial government funded the construction of the campus only after students submitted a petition with 56,000 signatures to the legislature. Still, students had to build their own playing fields and the University did not have dormitories nor social centres. UBC grew steadily in the many decades that followed, although this was severely stalled by the Great Depression and the Second World War soon afterward.

The campus architecture built in the Post-War era did not exactly follow the original idea of creating beautiful campus facilities that also complimented the geographical location and natural scenery of the area. The UBC student-made parody video of the Adolf Hitler movie Downfall includes a one-liner that [accurately and beautifully] mocks the 1960s and 1970s-built Buchanan Complex, home to the Faculty of Arts: “We would have the money to tear down Buchanan Tower and every other building that looks like it was constructed by Stalin!” The video’s creators point to the fact, in hilarious fashion, that weeks after UBC announced its $1.5-billion “Start an Evolution” fundraising campaign to build new student spaces and academic buildings, the University of Toronto announces its own $2-billion campaign.

UBC is currently engaged in the largest construction boom in its history. It is in the process of renewing its aging campus facilities and building numerous new student and academic spaces, new student housing complexes, and even entire new neighbourhoods including one new community that will house 12,000 people when complete.

Click here to read PART 2 of this article: “UBC campus a city in itself, in process of complete transformation”

The Original 1912 Vision of the UBC campus at Point Grey (Image credit: UBC). Click on image for larger version. 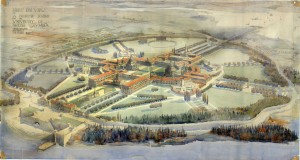 The Second Vision of the UBC campus at Point Grey, created in 1914. (Image credit: UBC). Click on image for larger version. 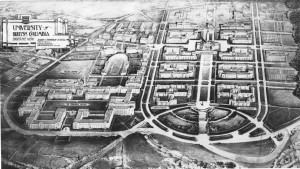