Red Rock is a Californian winemaker, and last week, they held a launch of the 2010 Malbec. To showcase the wine, they hired a catering company called A Moveable Feast to cook various dishes on hot rocks, as an homage to the winemaker. 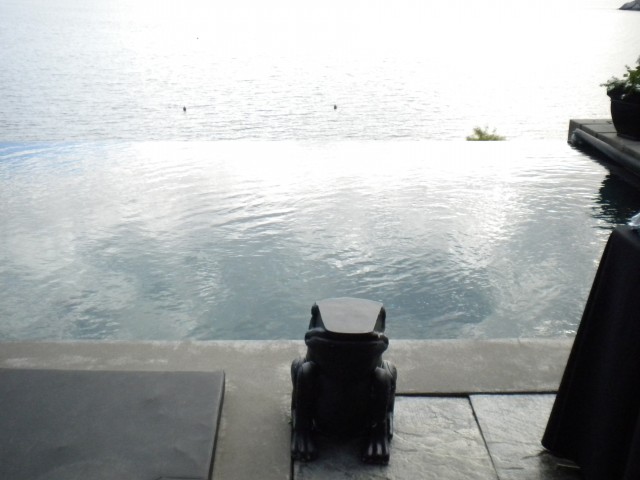 The party took place in a private home in West Vancouver with amazing waterfront views and an infinity pool to boot. The setting was peaceful and serene. Luckily, the sun came out for us, although this is the coldest and wettest June we’ve had in Vancouver for 40 years. 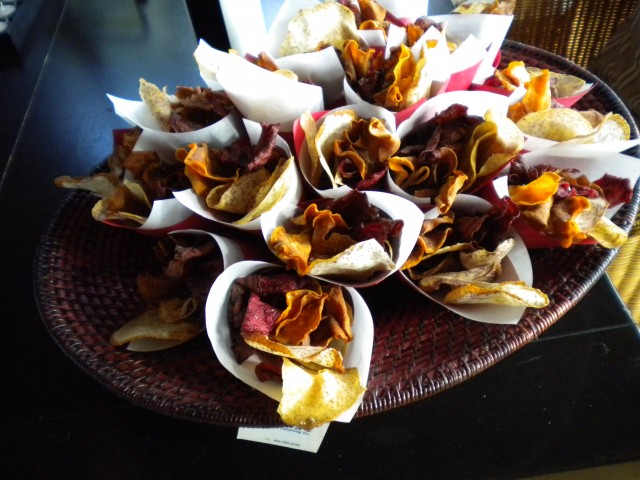 .
Upon entry, a beautiful bouquet of freshly made chips greeted us, these remind of Terra chips, but the display is what really impressed me. 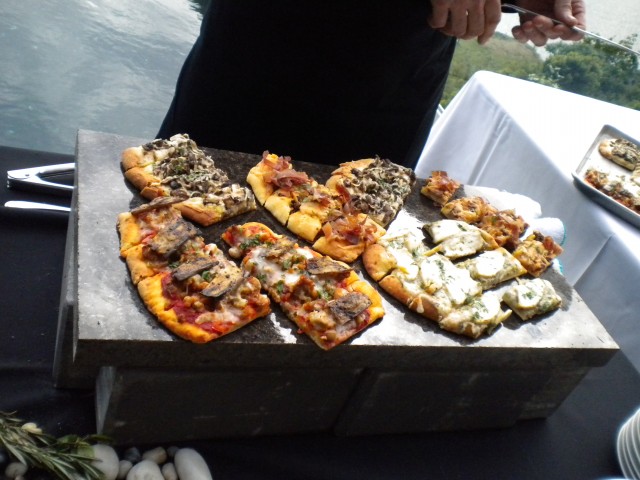 All the food you see here was prepared by A Moveable Feast We started off with a variety of flatbreads, some with chicken, some with mushrooms and a vegetarian one too. As you can see, these were simply grilled on the stones. 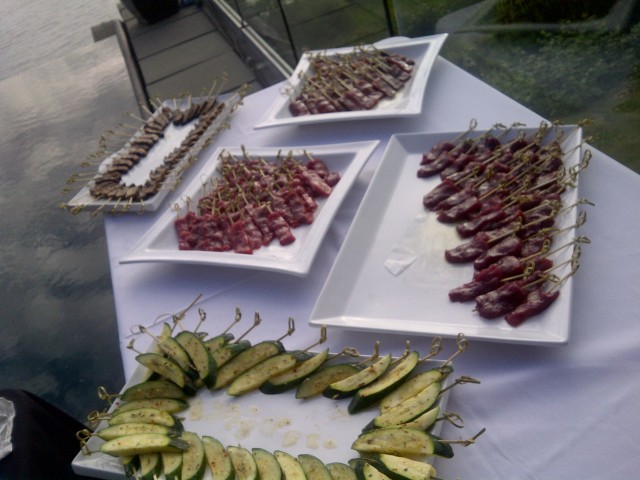 The highlight of course were the meats. Thinly sliced to ensure even cooking, we were served venison, lamb and sirloin. The flavours of the meat really stood out due to a very simple marinade. You can add some sauces to complement such as a chimichurri sace as well as a spicy barbecue sauce. The stones are heated to over 500 degrees and slowly cook the food to order. There aren’t really grill marks but there is a definite sizzle when the meats are placed onto the stone. In just a few minutes, these thinly sliced meats are at a nice medium, but you do have to flip them, since the heat is only from the bottom. 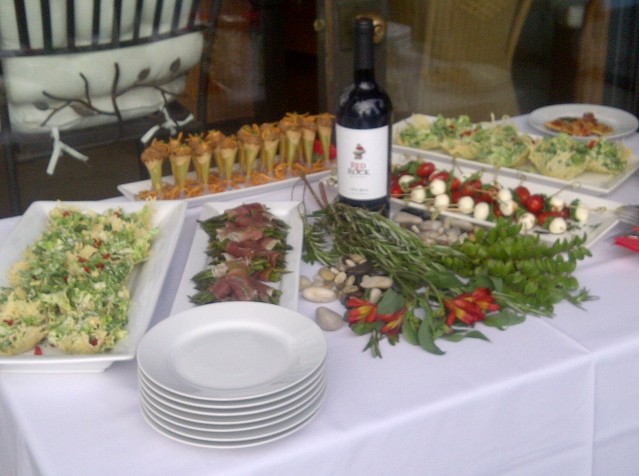 In addition to the meats, there was also an Appetizer Buffet. The first one I tried was the Prosciutto Wrapped Asparagus, a few spears of asparagus wrapped with a paper-thin slice of prosciutto. 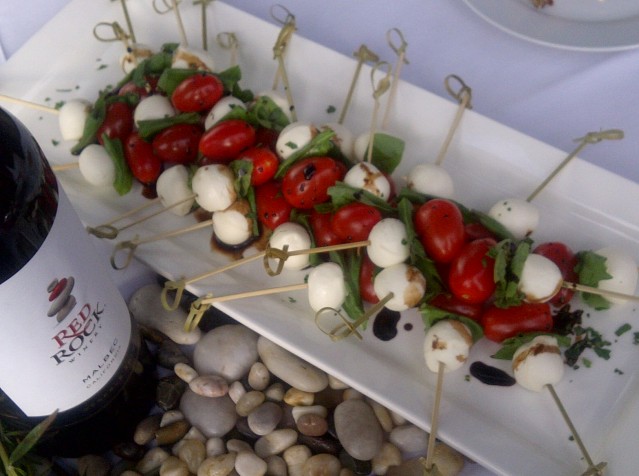 Another wonderful appetizer was the Classic Tomato and Bocconcini salad. Skewered with a bit of basil and simply drizzled with a touch of balsamic, this was a nice healthy bite. 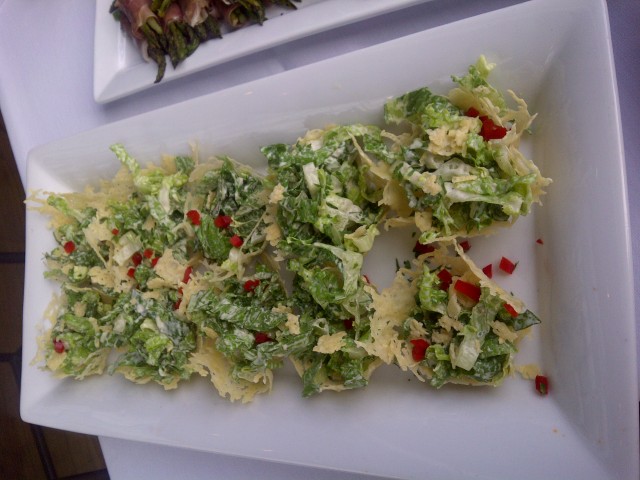 The other appies were also playtful twists of classics,. such as the Caesar Salad in a Parmesan Cup was no exception. It’s your traditional Caesar salad but in a cup made with melted parmesan shavings. 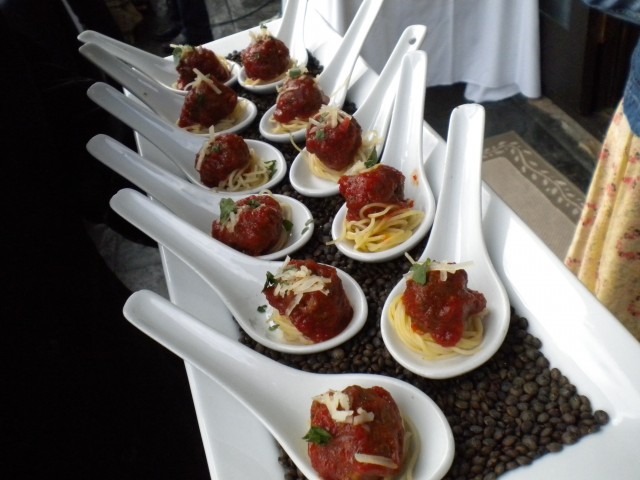 Normally, Spaghetti and Meatballs would be pretty hard to eat standing up, but not when it is served in a Chinese soup spoon. Setting the spoons in peppercorn prevented them from sliding around too. 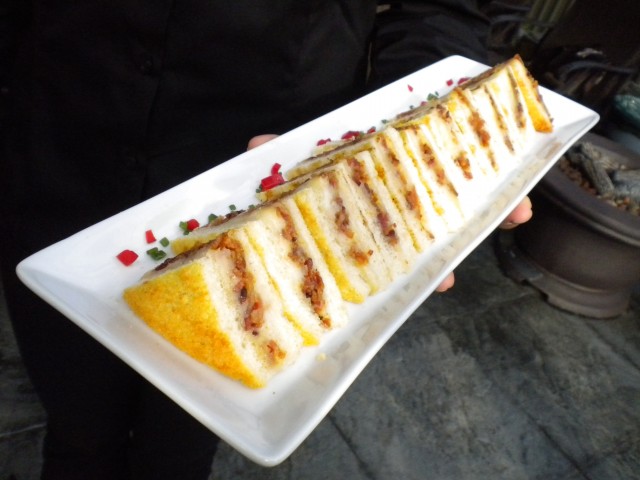 And last but not least, there were these amazing Bacon and Gruyere Grilled Cheese sandwiches. No party is complete without bacon. 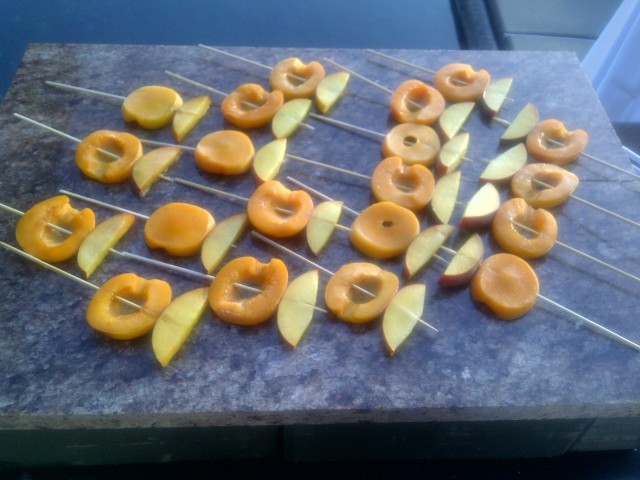 These stones are also great to grilling fruits, such as peaches! the heat really brings out the natural sugars. 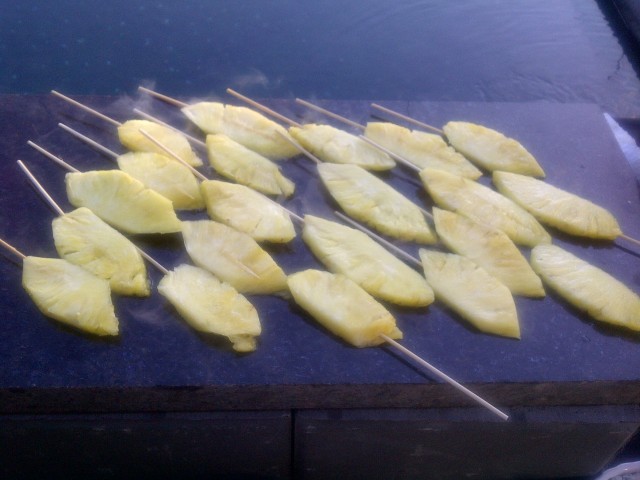 I’ve never been a fan of warm fruit, but the Grilled Pineapple slices were some of the best I’d ever had. 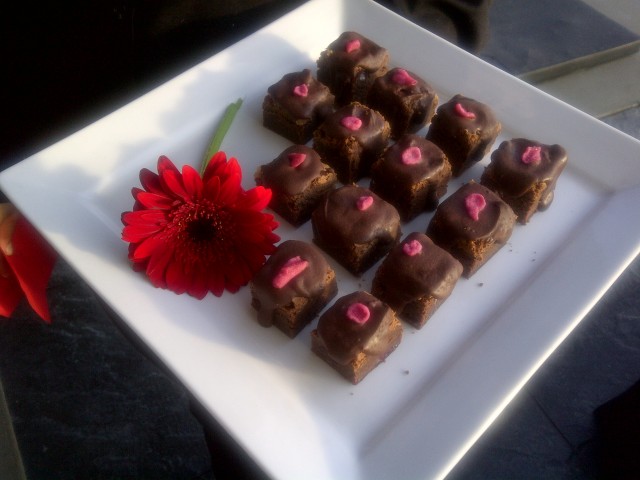 Also on the dessert list were some Cranberry Brownies with a nice tart and sweetness to each little bite. 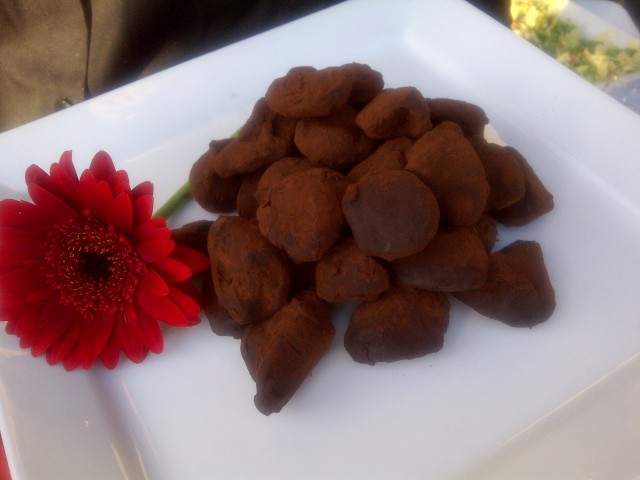 And yes, there were  some Homemade Chocolate Truffles Rich and moist with a creamy centre, I was so happy that I saved froom for dessert! 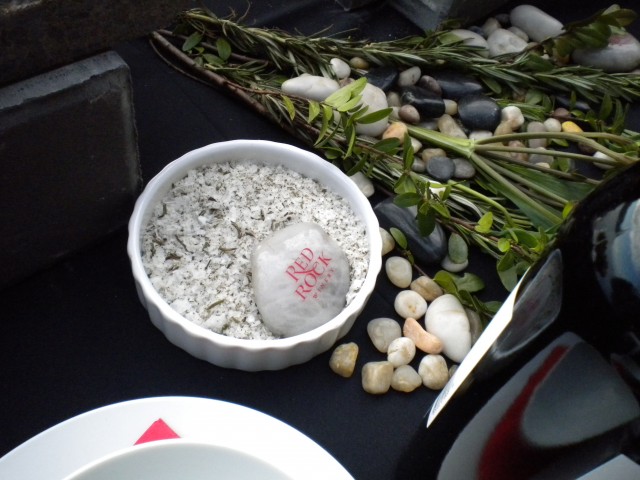 The Red Rock Malbec is a Malbec with hints of Petite Syrah and Cabernet Sauvignon, giving the wine a very interesting depth of flavour. At a price point of $16.99 at BC Liquor stores, this wine is well worth a try.