A shared interest in great music brought the two girls together. Rebecca Scheja and Fiona Fitzpatrick not only reign Sweden’s club scene, they have become icons for a whole generation of Swedes and represent what hard work combined with talent can do.

In May 2010 the girls released their first single – Luminary Ones. As 2010 ended, Luminary Ones had become one of the most played songs on national radio P3. In addition to touring the whole of Sweden they followed Robyn as opening act on her European tour.

If that was not enough – Swedish Television followed the girls for several months, which has resulted in their own self-titled tv-show. Wherein you can follow their work as DJs, producers and urban girls.

2011 became an even bigger year for Rebecca & Fiona, they released their double platinum selling single Bullets, the double a side If She Was Away/Hard and the smash single Jane Doe. In November they completed everything by putting out their debut album I Love You, Man. In addition to that they created Turn It Down, their hit collaboration with US DJ superstar Kaskade.

Last year Rebecca & Fiona played over 100 shows all over the world alongside DJs like Tiësto, Kaskade, Axwell and Steve Angello, and 2012 looks like it will be when the girls hit global stardom, already having a month long US tour confirmed and receiving the award for Best Electronic/Dance at the Swedish Grammy Awards 2012.

Don’t let their beauty and glamorous public life fool you. Rebecca & Fiona are dedicated musicians who spend more time nailing loops in the basement of their recording studio than to splash champagne at trendy nightclubs. They wouldn’t have time anyway, they’re too busy killing the dance floor.

To enter to win one of two pairs of tickets to Rebecca and Fiona, you have to do the following: 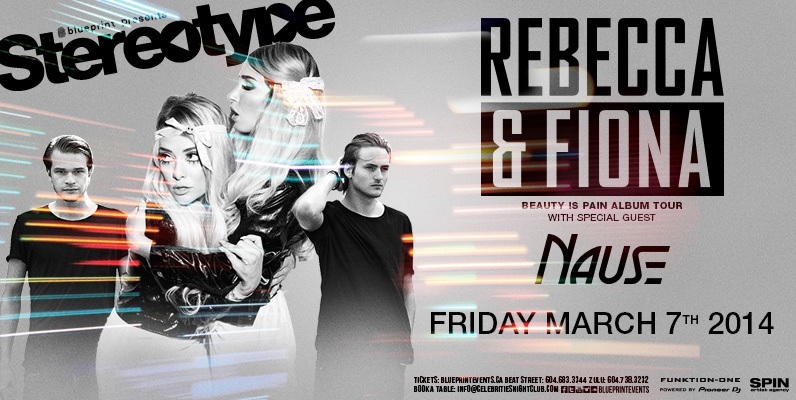