The suburb of Richmond is getting in on the waterfront action as a new urban-ish waterfront community will take shape by the Fraser River. The design and development team is the very same one that transformed Vancouver’s Coal Harbour neighbourhood, so look for prices to be out of the reach for the common Lower Mainlander. I must say that Richmond out of all the suburbs has the best plan for a downtown centre, sorry Mayor Watts.

The community is called River Green and is to be built on a 28-acres parcel of waterfront over the next 10 to 15 years. It will feature upscale residences with waterfront and mountain views, parks, cafes, waterfront restaurants, and shops along a winding waterfront similar to the seawall. 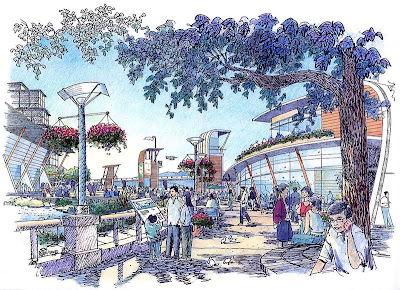 Naturally the location of this development lends itself to a few questions. Will “upscale” residents put up with the constant barrage of noise from the near by YVR? What about the stability of the land? Thank good for boobquake I guess.

In 10 years time this could become a vibrant neighbourhood. I know that sounds funny when you consider that Coal Harbour is anything but, however, this is Richmond and the options of places to go are much less than downtown Vancouver. Only thing that I would like to see is a transportation plan, which would go a long way in increasing the vibrancy of the area. The last thing you want to see is more cars on the road.

Will the Fraser River become the new waterfront? Vancouver is building its own community bordering Burnaby called East Fraserlands along the banks of the Fraser.