In about 20 years of whale watching with Legacy Charters, Heather MacIntyre said she has never seen anything like it.

On May 9, MacIntyre had an unforgettable encounter with a local whale off the coast of San Juan Island, WA.

Windy, a female humpback whale that is identified with her unique fluke print surfaced closer than normal, and eventually came within arms-length of the boat.

“It’s not something that we seek out,” MacIntyre said. “We stay within 200 yards of the whales at all times, a lot of the times more.”

MacIntyre was close to B.C.’s Saturna Island at the time. Recounted her experience, she noted that Windy’s close proximity to the boat made it dangerous to start the motor — so they remained in shut-down mode.

“I’ve heard stories, and had witnessed her going up to other boats earlier that day, but NOTHING prepares you for an intimate encounter with a thirty-five foot humpback whale,” she wrote in a Facebook post about her encounter. 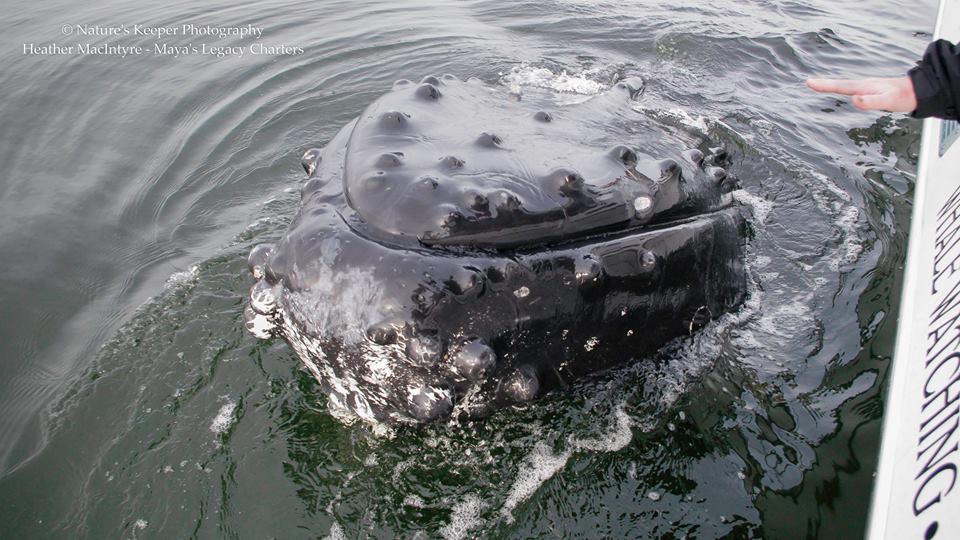 Whales are known to willingly interact with boats. In other words, they tend to love “people watching” as much as we do for whale watching. Windy seemed to respond to the whale watchers’ exhilaration. Her method of interacting was to exhale on the watchers, and at one point even blew off a passenger’s off into the sea by doing so.

After cheering on Windy, she disappeared into the water, only to leap out in full breach to impress her fans.

Windy interacted with the boat for just over an hour. MacIntyre said it’s incredible for a whale to make a conscious decision to spend that much time with humans.

“We are not the only ones that are seeking attention,” she said.

MacIntyre said that these encounters are rare. In compliance with the Marine Mammals Protection Act, they are legally required to stay within 200 yards of whales. But this situation was not in the hands of the crew, as Windy was the one seeking out the boat.

These types of stories are not often told due to a fear of backlash from those who may classify this interaction as harassment. But MacIntyre hopes that this story will inspire people to protect and give care for the environment and those who share it.

“We’re not the only intelligent species that deserve respect. We should be trained to protect and should be learning about the mammals that live in the same space that we are.”

Last year, a necropsy on the killer whale found off the B.C. coast indicated that it was starved for a prolonged period of time. Southern resident orcas were declared endangered species in 2005, with only 88 of them in the world at the time.