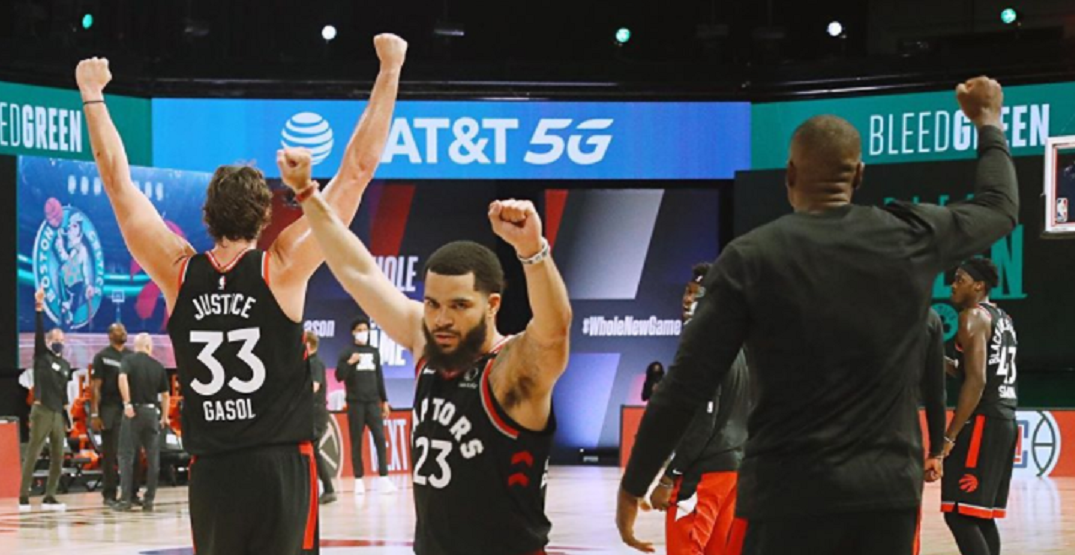 The Toronto Raptors are back in business.

With a 100-93 win in Game 4 of their second round series against the Boston Celtics, the defending NBA champions have a erased a 2-0 deficit, evening the matchup at two games apiece.

Two nights after OG Anunoby’s buzzer beater heard ’round the world to walk-off Game 3, there was no signature moment to look back on tonight for Raptors fans.  But there were plenty of positives to be had on what was Toronto’s most complete game of the playoffs thus far.

Pascal Siakam, who led the Raptors in scoring in the regular season with 22.9 points a game but had widely documented struggles against Boston, hit the 20-point mark for the first time in the series as he finished with a team-high 23. With a shade over 45 minutes, he also led Toronto in playing time, despite shooting just 2-13 from beyond the arc.

Siakam said if you're not hitting threes you need to "find something else" to do to impact the game and that's what he tried to do in second half.

They went up 81-73 after three, which matched their 8-point lead heading into the third quarter of Game 2. But a strong fourth quarter effort allowed Toronto to pick up their second win in as many games and avoid what’s typical a death sentence in a 3-1 deficit.

After a couple games that went right down to the wire in Games 2 and 3 of the series, the victory must’ve been just a little bit easier on the Raptors’ fanbase’s heart rates.

The biggest difference maker on the night was a poor shooting night for the Celtics from beyond the arc, as the Raptors hit 17 of 44 3-point attempts, while Boston went just 7-35.

The Celtics actually outshot Toronto overall (44-39.5%), but those missed long-range attempts ended up being a dagger for Boston.

Point guard Kyle Lowry had another strong performance, contributing at both ends of the floor, contributing 22 points, 7 assists, and 11 rebounds along with a pair of blocks and steals each.

However, the 34-year old Lowry isn’t complaining about the effort he’s been putting in.

Kyle Lowry: "I've played 80-something minutes in 2 games. Continue to keep pushing. We know how tough those guys are but we've just got to keep playing basketball."

Five three-pointers from Fred VanVleet were instrumental in his own contribution of 17 points.

Serge Ibaka also had a strong performance for the Raptors off the bench in 22 minutes, putting up 18 points on 7-9 shooting from the field to go along with this emphatic third quarter block.

With a couple of wins behind them now, the biggest factor for the Raptors will be the ability to continue their momentum and avoid complacency. The strong Toronto effort wasn’t unnoticed by Celtics forward Jayson Tatum, who led the game with 24 points:

Jayson Tatum: "They played harder than we did, and that was just noticeable on both ends of the court."

Though Toronto did have a strong defensive effort in Game 4, it’s unlikely to see two of Boston’s starters have such a rough night again.

The duo of Jaylen Brown (14 points, 4-18 from the field) and Marcus Smart (8 points, 2/8 FG) had uncharacteristically poor nights.

The Celtics have the ability to blow the Raptors out when theyre on and I just don't think that's true for Toronto.

But Toronto can win ugly consistently in this series. The series has come down to a best of 3.

And hey, there was even a little milestone in their for their second-year head coach Nick Nurse too.

Raptors even series with Celtics 2-2

Nurse heaped the praise on Lowry’s ability to close the game strong:

No “ceilings” — Raptors coach Nick Nurse is so comfortable w/ Kyle Lowry playing 44 minutes in Game 4 win over Celtics that he jokingly asked him if needed a sub in the 4th. “He chewed me out. I was kidding… Our guys are used to heavy minutes & they’re used to this intensity.” pic.twitter.com/0Q9x5oSMG2

No wonder he was named the 2019-20 NBA Coach of the Year. It’s now largely in his court to see if he can manage to make his second Eastern Conference Final, and become the only coach in Raptors history to do so.

With the #1 seed Milwaukee Bucks down 3-0 in the other side of the Eastern Conference bracket against the Miami Heat, it’s hard not to think ahead about another big championship run.

But before we get ahead of ourselves, Toronto’s Game 5 against Boston goes Monday night at 6:30 pm ET/3:30 pm PT on TSN.