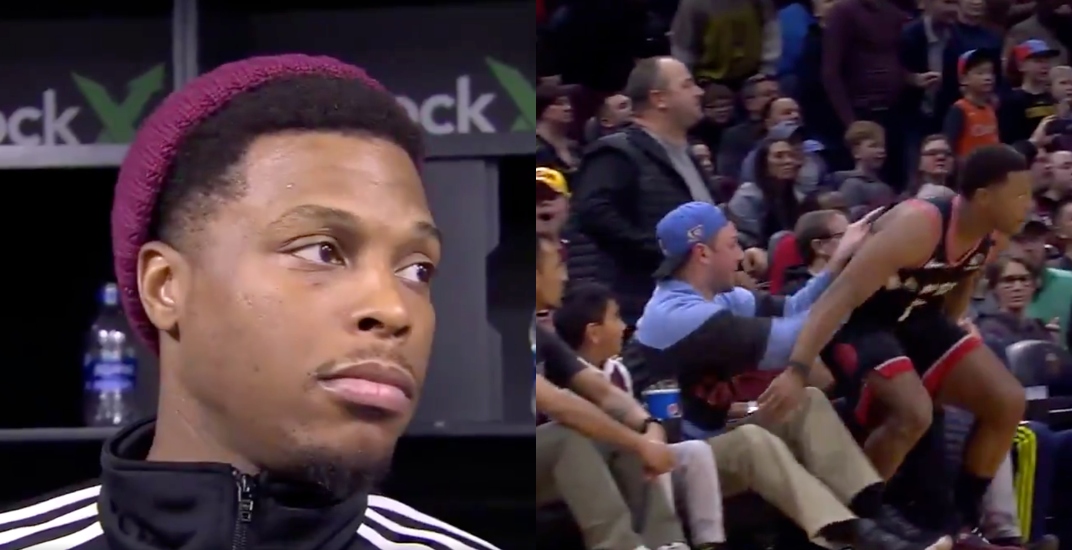 Kyle Lowry wasn’t pleased with an interaction with a fan sitting courtside at yesterday’s Toronto Raptors game in Cleveland.

With the Raptors leading by one point late in the fourth quarter, Lowry fell into the front row while trying to save a loose ball. It was a courageous play by the six-time All-Star, and an important one too.

The play led to a Serge Ibaka three-pointer seconds later, and the Raptors beat the Cavaliers 115-109.

How can you not love @Klow7 pic.twitter.com/Y0MwbwdTam

But upon closer inspection, Lowry wasn’t merely helped to his feet from the Cavaliers fans in the front row. Lowry turned right away and stared daggers at one fan who put his hands on him.

After the game, Lowry said the fan pushed him.

“I’m diving for a loose ball and the fan’s pushing you. That’s unbelievable man,” Lowry told reporters. “NBA fans shouldn’t be represented by people like him.”

Of course, this isn’t the first time Lowry has been pushed by someone in the front row of an NBA game. Lowry was shoved by Golden State Warriors minority owner Mark Stevens during Game 3 of the NBA Finals. Stevens received a one-year ban and was fined $500,000 for his actions.

“It’s the second time it’s happened to me and it’s kind of getting crazy cause next time it happens I don’t know if I’ll be able to control myself — and hopefully I will.”

“Fans like that shouldn’t be in our buildings and our arenas.”

Check out the video below for Lowry’s comments, as well as other angles of the incident:

“Fans like that shouldn’t be in our building, in our arenas.”

Kyle Lowry said he was pushed by a fan when he dove into the stands going after a loose ball on Thursday night. pic.twitter.com/lwbsvi722l