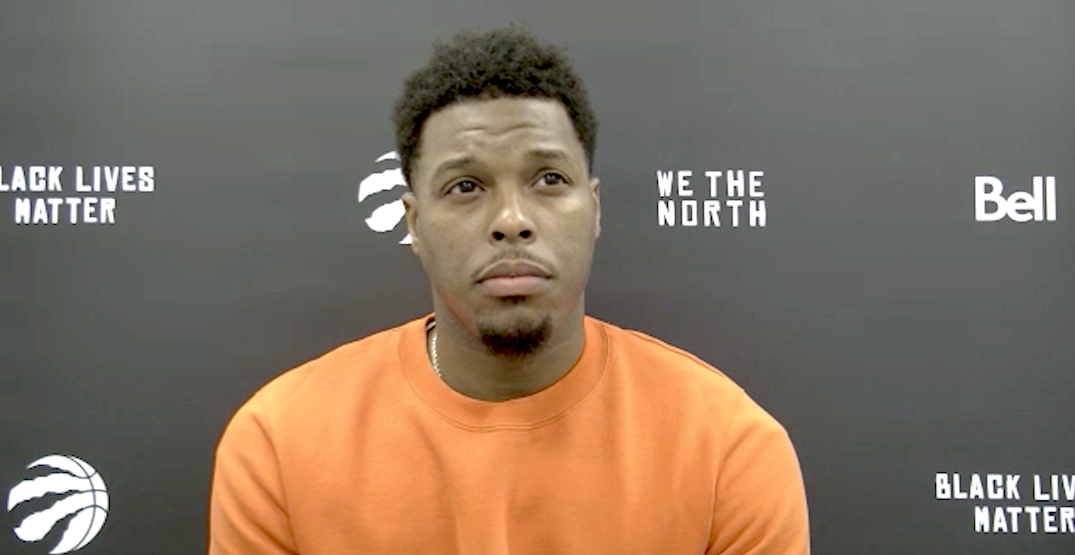 The Toronto Raptors and Phoenix Suns didn’t boycott yesterday’s game, but it was on the table after a violent pro-Trump mob stormed the US Capitol earlier in the day.

Star players from both teams, Kyle Lowry and Chris Paul, met before the game to decide how to respond to the shocking events of the day. The Raptors and Suns chose to link arms, forming one circle together at centre court, as a show of unity.

Following the game, it was clear what was on the minds of Raptors players, who have been strong advocates for the Black Lives Matter movement.

“Honestly, basketball doesn’t matter,” said Lowry, when asked a question by a reporter about the game. “Today, what occurred on Capitol Hill was disturbing.”

“If they were people of colour, I think it would have been a whole different situation. We say 2021 is a new year, but the same situations are still prevalent and in our face.”

For the rest of his media availability, Lowry used his platform to speak about far more important topics than NBA basketball.

“The things that happen in the world, we are going to talk about them, discuss them, and not shy away from them.”

Lowry was beside himself when talking about Donald Trump, pointing out that the US president encouraged the violence on Wednesday. Four people died during the riot at the US Capitol.

“The man who is the president told them to do it. That man is a criminal and he should be charged.”

“No surprise. If you’ve been paying attention, you can see what’s going on,” said VanVleet. “I grew up in this country so I’m used to it. I’m not surprised anymore by anything.”

“America has been racist and it will continue to be racist, and we have to continue to do our part inside of that system.”

Not only were the riots in Washington on the minds of players, so was the news that the police officer who shot unarmed Black man Jacob Blake last summer would not be charged. That shooting sparked widespread boycotts across professional sports, led by NBA players, last summer.

“What happened in Kenosha with the officer [who shot Blake] not being charged is kind of a slap in the face to Black people all over the world,” said Lowry.

Lowry also commended the women of the WNBA for being at the forefront of the movement regarding the Georgia US Senate runoffs. Democrats won two key votes this week, including Raphael Warnock, who will become the first Black senator in Georgia’s history.

“It shows the power of women, Black women,” Lowry said of WNBA players.