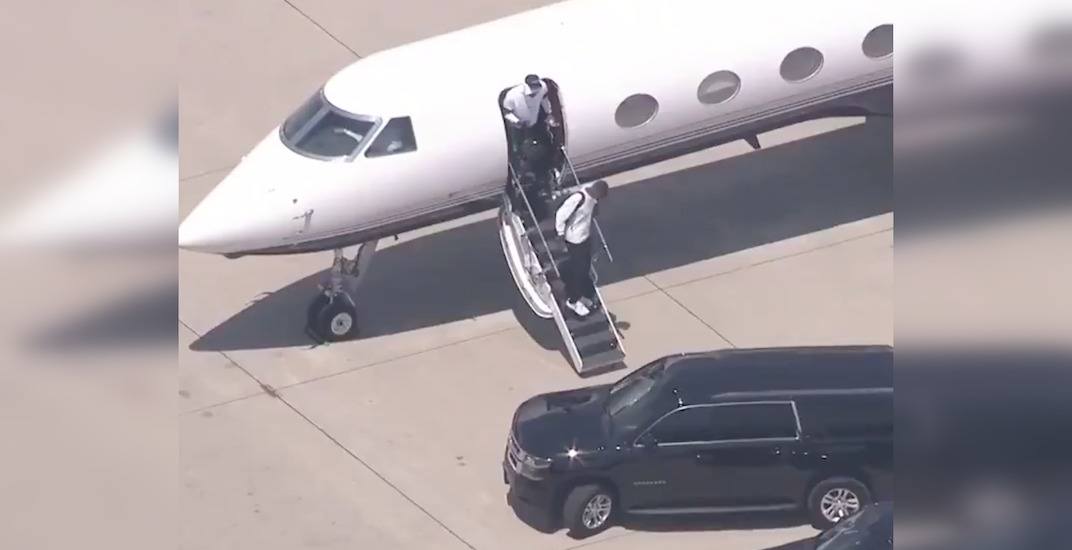 Raptors fans are losing their collective marbles right now, as it appears Kawhi Leonard has arrived in Toronto.

CP24 is showing live aerial shots of the MLSE plane landing in Toronto. 3 guys got off the plane and into SUVs. Looked like they were wearing New Balance. One had a towel over his head. They're now following the SUVs down the highway. This isn't abnormal at all.

CP24’s camera caught the arrival of MLSE’s private jet, which touched down at Pearson Airport this afternoon. The plane arrived from Los Angeles.

Out stepped four men, including one with a towel covering his face.

The MLSE plane has landed in Toronto and someone is here 👀👀
.
(Via: @CP24) pic.twitter.com/LtM5es1rnn

CP24’s cameras followed the SUV on the highway…

I can't believe this is a thing on TV right now #KawhiWatch #WeTheNorth pic.twitter.com/slUuFoPG2c

A CP24 news helicopter following two black SUVs. One of which believed to contain Kawhi. pic.twitter.com/dE6qn3NBv3

…while fans and reporters gather at the Hazelton Hotel, where he is rumoured to be heading.

Yes, we’re at that stage with #KawhiWatch.

Kawhi reportedly met with the Raptors yesterday in Los Angeles, so a trip to Toronto today does seem promising.

But who really knows what to believe at this point? The Kawhi Watch has had no shortage of wild rumours in every direction.

It’s reportedly a three-horse race, with the Raptors and both teams from Leonard’s hometown of Los Angeles – the Lakers and Clippers – in the running to sign the NBA Finals MVP in free agency.