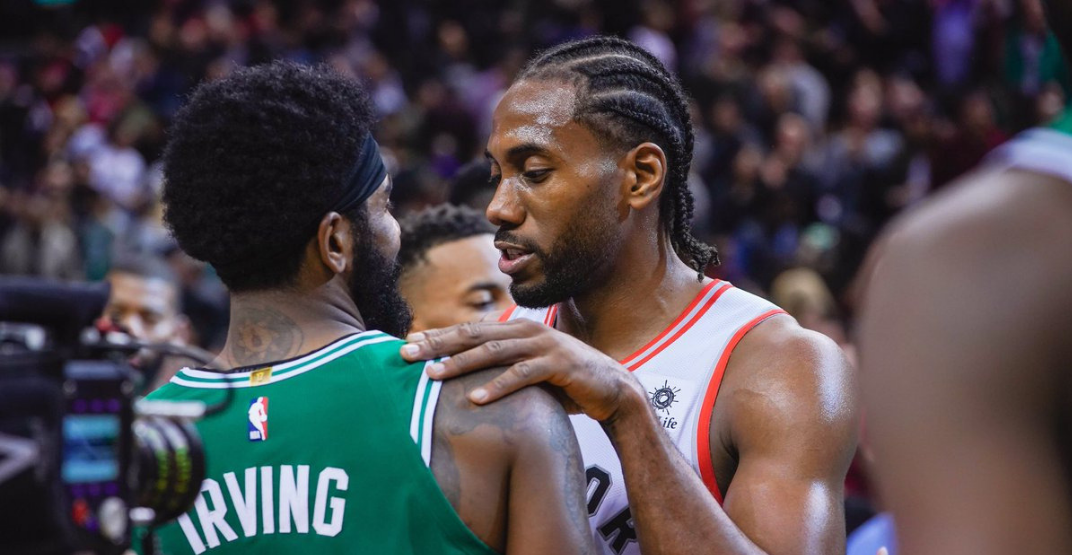 The East’s best player showed up on Friday night, and it wasn’t Kyrie Irving.

The Toronto Raptors’ new star player Kawhi Leonard dropped a game-high 31 points in the 113-101 win over the Boston Celtics on Friday night, a matchup that many fans and analysts believe to be a potential Eastern Conference Finals preview.

Leonard’s double-double gave the Raptors the lift down the stretch in what was a close game until the final moments.

“[Kawhi] did a little bit of everything, he hit one or two threes in that [third] quarter, he took a couple in transition to the basket, and then he had a couple isolation post-up plays, too,” Raptors head coach Nick Nurse told reporters.

Kawhi played so well that he managed to get some very, very early MVP chants from the Raptors faithful at the free-throw line.

Kawhi getting MVP chants in his second game with the Raptors pic.twitter.com/yDL476McI9

It was hilarious enthusiasm from Raptors fans, who may have set an NBA record for the earliest MVP chant, just two games into the season.

Kawhi Leonard says he was surprised to be getting “MVP” chants so early in the season. pic.twitter.com/0wRghxZXwD

“It’s a little too early. It’s game two, but I appreciate the support, and I know they’re excited about us winning the game tonight,” Leonard said. “In the past I could see how loud this arena is and how amped they get… the only thing that surprised me was the MVP chants.”

Kawhi also got the attention of the Raptors’ global ambassador, Drake.

Leonard wasn’t great the entire game, however, struggling in the first half with nine points on a poor 3-for-11 from the field. What changed the complexity of the game was Kawhi’s dominant second half.

He dropped 22 points with some big defensive stops down the stretch guarding the Celtics’ star players, Kyrie Irving and Gordon Hayward.

While Leonard’s performance was the biggest storyline of the game, he managed to get some help from Serge Ibaka, who dropped 21 points and six rebounds, and Kyle Lowry, who stuffed the stat sheet with 15 points, six rebounds, and six assists.

Fred VanVleet and Danny Green also made their impact throughout the game as part of the finishing group that hit a few big threes, while helping out on the defensive end.

The victory over an Eastern Conference titan came without Delon Wright, one of the Raptors’ most important role players, who sat the game due to a left thigh strain.

The Raptors now travel to Washington for the second night of a back-to-back against the Wizards on Saturday night.