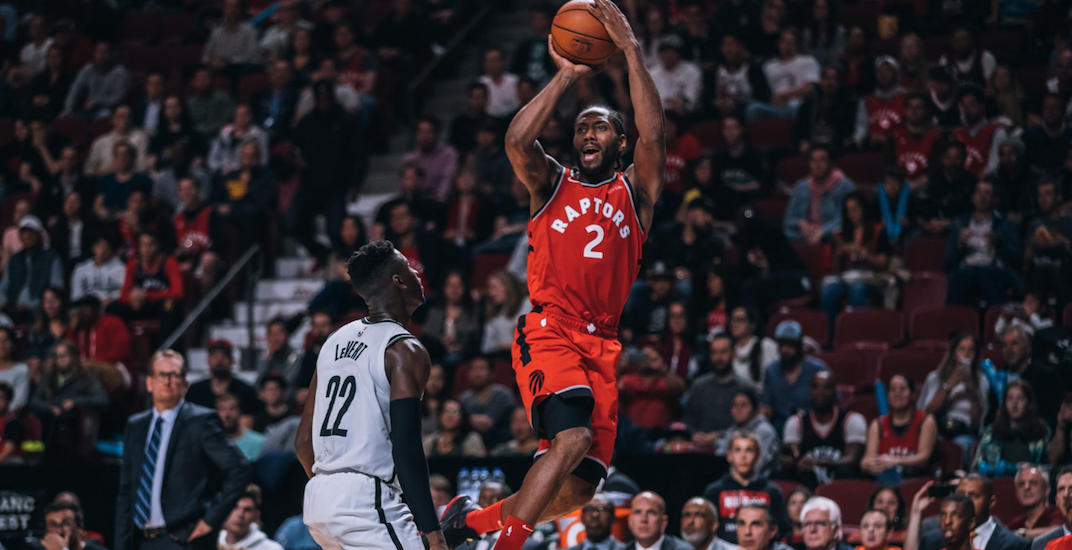 There are plenty of storylines to follow heading into this season for the Toronto Raptors.

The summer saw the Raptors fire Coach of the Year Dwane Casey and move on from All-Star DeMar DeRozan, all in an attempt to make a one-year run with a top-five player in the league in Kawhi Leonard.

On paper, the Raptors are an improved team from last season when they won 59 games – more than every other NBA team save for the Houston Rockets.

1. Push the right buttons against the Celtics

LeBron James has left the East, but the Boston Celtics are adding two star players to a team that pushed Cleveland to their limit in the Conference Finals. So competition will be stiff.

Are the Raptors up to the challenge?

The Celtics have a versatile five-man lineup with Kyrie Irving, Jayson Taytum, Jaylen Brown, Gordon Hayward, and Al Horford. All five can shoot from three, and Irving is a premier ball handler.

The Raptors, now armed with NBA champion Danny Green and two-time Defensive Player of the Year Kawhi Leonard, can match the Celtics lineup of death:

This lineup could handle the Celtics’ scoring punch and cause problems for their opponents at the offensive end of the floor. Leonard is walking mismatch and the other four are developing three-point shooters. If Lowry is rolling offensively, he can also cause major issues for Irving.

It will be interesting to see if new head coach Nick Nurse goes to this lineup to shut down versatile big guard lineups that are becoming more common in the modern NBA game.

2. Kawhi Leonard is a game-changer

Leonard is a top-five player in the NBA when motivated, and based on the reports we’ve heard so far, he loves coach Nurse’s creativity. That’s a good sign.

NBA teams routinely find the mismatch and exploit it.

Leonard is a walking mismatch.

A motivated Leonard can score 25 points per game and shutdown any opposing wing that he could face in the Eastern Conference playoffs.

Taytum is going to be great, but this year he would be no match for Leonard because of his age and stage of development. He’s quite simply not an alpha dog.

Philadelphia’s Ben Simmons is one of the most unique players in the league. He is also a limited shooter at this stage in his development. Stopping him in transition takes away the 76ers’ equal opportunity offence and makes them play in the half court.

Indiana’s Victor Oladipo has become an excellent combo guard, but is undersized and would get shredded going against Leonard on both offence and defence.

Wizards’ guard Bradley Beal faces the same challenge as Oladipo. Beal is an undersized wing who needs space and screens to gain an advantage against a big, long player like Leonard.

Lastly, Leonard has elite quickness, strength, and anticipation. He could guard both Khris Middleton and Giannis Antetokounmpo if the Raptors were to face the Bucks in the playoffs.

All the wings mentioned would struggle on both sides of the ball against Leonard. In 2014, when Leonard was named NBA Finals MVP for the San Antonio Spurs, he had to guard LeBron James.

Besides the Celtics, the Raptors will have to deal with several other contending Eastern Conference teams to grasp one of the top two spots. The Bucks, Wizards, 76ers, and Pacers all have legit outside shots to beat the Raptors, but not one of them have a player of Leonard’s caliber.

Irving, Wall, Oladipo, and Simmons all fall short of pantheon of great NBA players. They are All-Stars but need a strong supporting casts to advance to an NBA finals. Only the Celtics boast a lineup that could match up with the Raptors.

The Bucks are the only team that possess such a talent. Giannis Antetokounmpo is the only other top-5 player in the East aside from Kawhi. The Greek Freak will contend for this year’s league MVP, but his playoff success will depend on the teams ability to knock down threes.

What the Bucks lack is shooting ability. Antetokounmpo, Eric Bledsoe, Tony Snell, and Brook Lopez are all average three-point shooters. This will allow the Raptors and the other mentioned teams to pack the paint against the Bucks. Antetokounmpo might win the MVP but his comrades will make him fall short in the playoffs.

The Raptors can match up with any team in the Eastern Conference. They have a superstar player in his prime for one season, and a roster full of guys that have something to prove after getting owned by LeBron.

The time is now, Raptors fans.