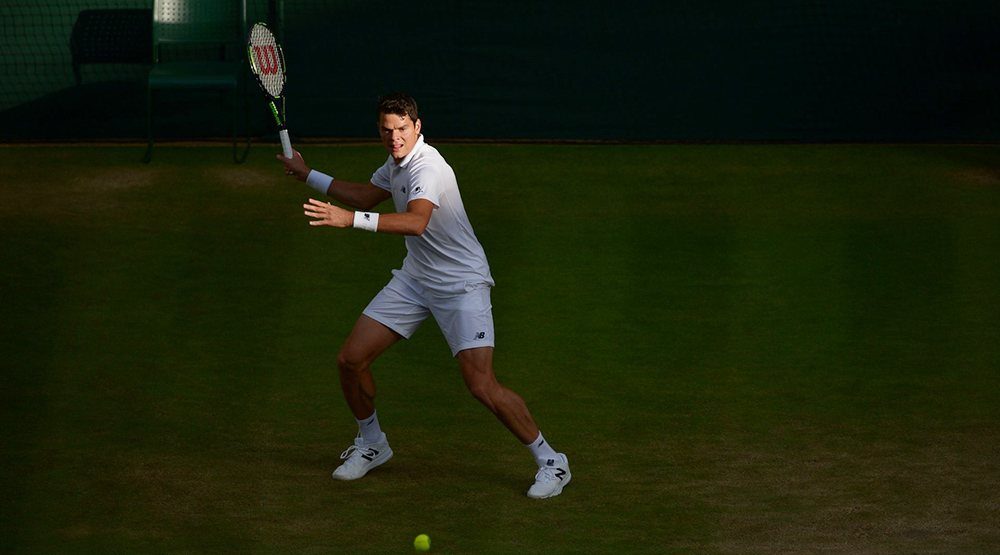 According to the oddsmakers, Milos Raonic will head into his Wimbledon semi-final as the underdog to Roger Federer.

It makes sense too – looking at past results (only) you’d have to be a deranged lunatic to pick Raonic to win. Not only does Federer own 17 Major titles to Raonic’s zero, the Swiss legend is 9-2 against Raonic in their head-to-head meetings.

Federer is also the third seed at Wimbledon this year – making him the second-favourite to win with Novak Djokovic out – while Raonic is the sixth seed.

Those odds, however, don’t take a few key pieces of information into account (or maybe they think they make no difference).

1. Federer is coming off injury problems

Just after losing in the Australian Open semi finals in January, Federer slipped in a bathtub and injured his knee requiring arthroscopic surgery. It was the first serious injury of his tennis career.

After returning and playing just one tournament – the Monte Carlo Masters – he withdrew from the Madrid Open because of issues with his back.

He returned only weeks before Wimbledon, playing a couple of tune-up grass tournaments in Stuttgart and Halle. Federer’s toughest tests since coming back from his knee and back injuries have so far been 8th ranked Domic Thiem, to whom he lost in Stuttgart, 11th ranked David Goffin, who he beat at Halle, and of course 13th ranked Marin Cilic at Wimbledon, who he beat in five sets on Wednesday.

Point is, Raonic will be his toughest opponent yet.

While that head-to-head record of 2-9 is daunting, Raonic can hold onto the fact he’s on a winning-streak against Federer. And if he beats Federer on Friday, it’ll become a two-game winning streak.

Raonic beat Federer at the Brisbane Open in January – before Federer was injured.

He built on that success a few weeks later, going all the way to the semi-finals of the Australian Open and winning a set against Andy Murray before an injury stopped him from having a chance to close out the win.

Raonic was already headed in the right direction – in the last couple of years he put tons of effort into developing a reliable baseline game, which he’s always needed to beat the best players – and his results in Australia showed it.

His addition of John McEnroe to his team has shown immediate strategic results.

The obvious one is Raonic’s desire to come to net – he’s hitting smarter, better approach shots and following them up with winning volleys.

The second and less talked about strategic change is the way Raonic is attacking his opponents’ serves. Today’s top players are consistently able to get serves back in play and break their opponents and McEnroe clearly wants Raonic to be able to do this as well.

Raonic is being especially aggressive on second serves, which could help him earn some key break points against Federer on Friday.

When the dust settles…

For many years tennis has been all about the big four (Roger Federer, Rafael Nadal, Novak Djokovic, and Andy Murray).

Tennis fans know that’s changed. Djokovic and Murray are still at the top, with Murray being the closest thing to a clone of Djokovic as there can be, but behind them it’s unknown. Stan Wawrinka and Kei Nishikori are right there, but inconsistent, so is Federer, and when Nadal returns there’s no telling where he’ll fit in.

Right now, to me the next-best after Djokovic and Murray is Raonic.

Canada will be hoping he proves that on Friday.