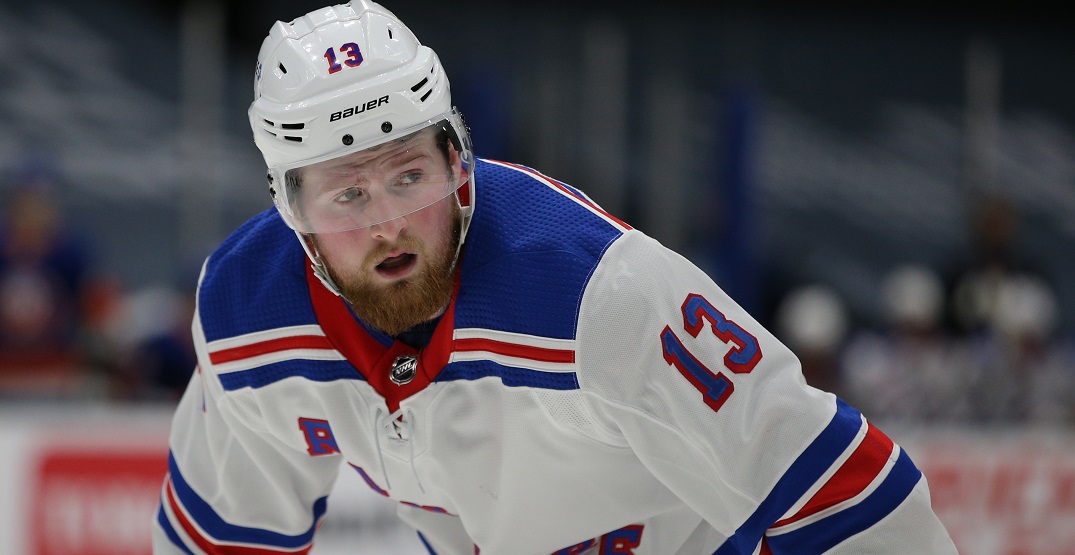 The Sidney Crosby comparison was natural, as they’d played for the same junior team, and recent successes of top picks like Connor McDavid and Auston Matthews created an immediate buzz around the Saint-Eustache, Quebec, native.

Lafrenière was taken first overall in the 2020 NHL draft by the Rangers, a pick that was no surprise to NHL draft experts and casual fans alike as he’d been touted as a franchise-altering player.

But at the NHL level, it’s been a mixed result for the 20-year-old forward.

Through his first 74 games, Lafrenière’s put up 16 goals and 10 assists for a total of 26 points. Playing a little under 14 minutes a night, he’s third on the team’s left wing depth chart behind veterans Artemi Panarin and Chris Kreider.

“I think you just got to stay focused,” Lafrenière said in an interview with Daily Hive. “It’s a hard league to play in… I just try to go out there and have fun, work hard. So that’s my mindset.”

Lafrenière said the jump to the NHL game taught him that there’s no opportunity where you can take a moment off.

“Every shift, you got to really compete hard,” Lafrenière said. “There’s a lot of good players out there. You got to be ready every shift, and you’re playing with good players too, so you try to pick their brain a little bit.”

These days, he’s teamed up with Filip Chytil and Julien Gauthier. It’s a learning endeavour for all three, as Chytil, aged 22, is the most experienced player on the line, having put up 201 games over five seasons.

Last year’s Rangers finished the season 16th in the NHL with 60 points but found themselves fifth in a tough East Division. This year, back in the normal alignment of the Metropolitan Division, they’re off to an 11-4-3 start, good enough for third in the division and a projected playoff spot.

Lafrenière had the weird distinction of being the league’s first ever draft selection via videoconference, as the in-person draft was scrapped last year due to the COVID-19 pandemic.

“Everything went really quick,” Lafrenière said. “As a kid, it’s a dream… it’s going pretty fast, and you get the lottery, the draft, and all of a sudden I was playing my first game.”

But Lafrenière’s been dealing with a more severe situation off the ice — he’s got a life-threatening peanut allergy that he’s had since his youth.

Lafrenière has teamed up with Kraft’s Protection for Peanuts campaign, which is a fund created to help offset the out-of-pocket cost of life-saving epinephrine injection pens, commonly known as EpiPens.

On his way back from the 2018 U18 World Championship in Russia, Lafrenière said he ate a meal with peanuts in it that could’ve had severe medical consequences had it not been dealt with immediately.

“I didn’t know,” Lafrenière said. “I was lucky enough to have my medication on me.”

Carrying around medication has become normal for Lafrenière, who takes it with him on an everyday basis for his “whole life.”

“I always make sure I have several [epinephrine injection pens] on me at all times,” Lafrenière added. “It’s truly a lifeline for me.”

Any Canadian with less than 100% coverage is eligible to be reimbursed for their pens through the campaign, which can cost on average about $120 per year. Approximately 2.6 million Canadians are at risk of severe allergic reactions.

Lafrenière said it’s important to use his platform as a pro athlete to bring awareness to the high cost of medication within Canada. The end goal is to make the medication cost “peanuts.”

“This campaign is a really good thing for people like me to help people out,” Lafrenière said.

On the ice, Lafrenière knows there’s still plenty left to play for with the Rangers this year and beyond and said he’s getting used to the adjustment of his first 82-game pro season.

“I’m still learning,” Lafrenière said. “It’s kind of a little bit of my rookie year in a sense. I’m just enjoying every night playing in new buildings in front of big crowds. It’s a lot of fun. And, you know, I’m pretty young… You gotta soak in as much as you can.”