Vancouver Police is asking the public for information after a seemingly random shooting in East Vancouver last month that left a skateboarder with a bullet hole through his hand.

The incident occurred before 3 am on October 4.

According to a release, a 21-year-old Vancouver man was riding his skateboard on Windemere Street near East 19th Avenue when he heard a loud bang as a vehicle drove past him.

A local resident heard the victim screaming in pain and called 9-1-1. He was treated for the gunshot wound through his hand and released from hospital.

The victim is not known to police and there was no obvious motive for the attack.

An initial search of the area in darkness did not show any immediate evidence of the shooting. However a bullet casing was found the next morning and in an additional search for evidence, police recovered a bullet lodged in a parked vehicle.

Now police are asking for the public’s help to identify a vehicle that is of interest to their investigation. The vehicle, which can be seen in the surveillance images below, is described as being red and even though the images are poor quality, police believe it is possibly a newer model Mazda 3. 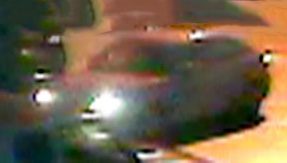 Investigators are hoping someone will combine the image of the vehicle and the circumstances surrounding the shooting and help identify those involved.