Plenty of ’80s superstars are invading our city this month (Blondie, Culture Club and Platinum Blonde to name a few), but none are as big or as awesomely cheesy as Journey. The band has sold 90 million albums worldwide and somehow managed to survive and thrive after the departure of lead singer Steve Perry (the spot was filled for good in 2007 by YouTube cover singer Arnel Pineda).

On Saturday, July 11, Vancouver fans will get a double-dose of Journey’s original lineup as well – founding guitarist Neal Schon will serve as the group’s opening act on the Canadian leg of the tour. As indicated by our setlist preview, Journey will play hits (and a couple of misses) from their four decade-long career, but before they take the Rogers Arena stage, we’ve compiled a list of random facts about the boys you might want to know going in. Nothing important – just useless trivia to impress your friends and annoy your co-workers with.

1. Steve Perry and the boys are the original Guitar Heroes

“A spectacular performance has just ended. Now it’s up to you to guide each Journey band member past hordes of love-crazed groupies, sneaky photographers, and shifty-eyed promoters to the safety of the Journey Escape Vehicle in time to make the next concert. Your mighty manager and loyal roadies are there to help, but the ESCAPE is up to you!” 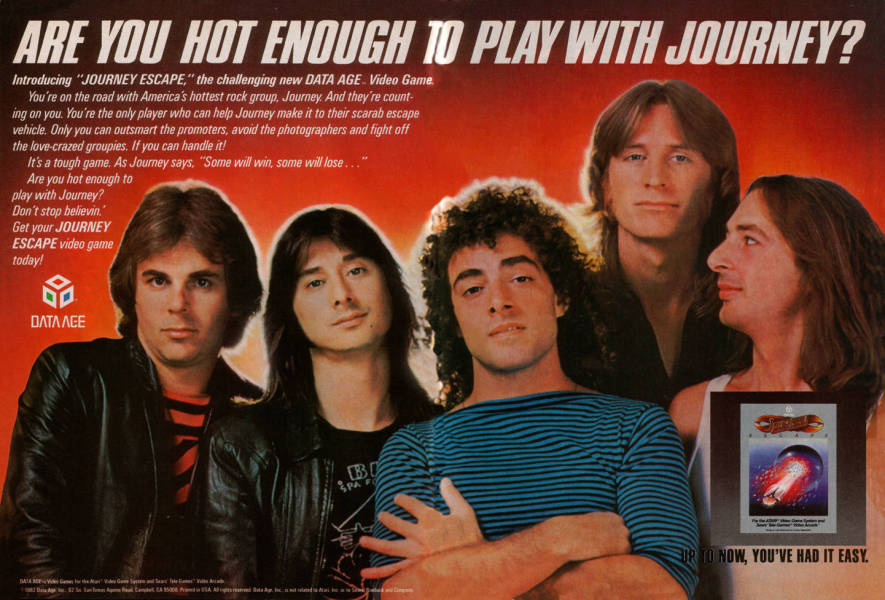 The game was a minor hit and spawned a sequel, simply called Journey, in 1983. This time, players were required to reunite the band members with their instruments and prevent those pesky love-crazed groupies from rushing the stage. Despite the success of the first game, the sequel was largely ignored by fans and Game Informer magazine included Journey on its list of the “Top 10 Worst Licensed Game Ideas Ever.”

2. Choosing a name proved to be an interesting JOURNEY for the band

In 1973, San Francisco radio station K-SAN held a contest where listeners were asked to suggest a new name for an up-and-coming rock band called “Golden Gate Rhythm Section.” The winner was promised free concert tickets for life, but the suggestions were so terrible (Hippie-potamus and Rumpled Foreskin, anyone?) that the band quickly decided on “Journey” and created a fictitious winner named Toby Pratt. The plan boomeranged a second time when a local man named Toby Pratt came forward to collect the prize. “I think we ended up having to give him something,” keyboardist Gregg Rolie recalls. “The whole thing kind of backfired.”

3. When it comes to Grammy Awards, some are born to sing the blues

Journey has racked up an impressive 17 top 10 hits and 11 platinum albums, but one thing that continues to elude the band is a Grammy. Despite being enormously popular, Journey has never been a critical darling – Rolling Stone magazine called their music “dopey” and once said “maybe there really are a lot of ‘streetlight people’ out there. If so, my guess is that they’ll soon glow out of it.”

The band received a single Grammy Award nomination in 1997, more than 15 years after their ascent to stardom, but lost to the Beatles. Journey remains part of a prestigious group of artists who have yet to win a Grammy that includes Queen, Bjork, Bob Marley, Katy Perry, KISS and Tupac Shakur.

Tickets are still available for Journey’s show at Rogers Arena here. As you can see by our setlist preview, the boys have an epic night in store for their fans. 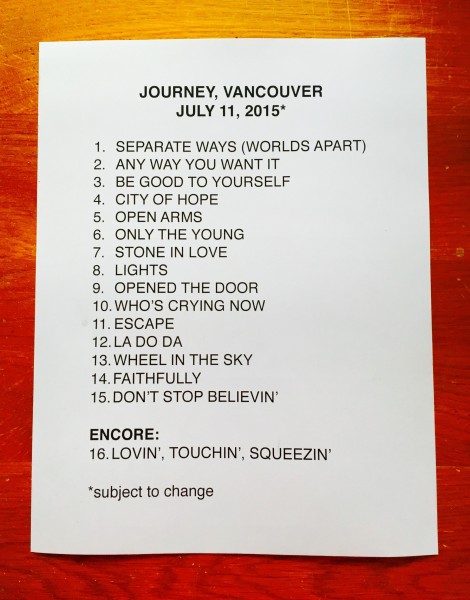