Dedicated Bollywood fans have been braving the rain and cold weather for the last three days and waiting for just one glimpse of their favourite stars, and the most highly anticipated arrivals had to have been Ranbir Kapoor and Shah Rukh Khan.

When the Rockstar Ranbir arrived on Thursday evening the crowd went wild. The heartthrob has already taken home to Best Actor Awards, and is nominated for a TOIFA in the same category. Here is a peek at the pandemonium that greeted Kapoor on his arrival at the Pan Pacific.

If people were crazy for the Rockstar, they were out of control for King Khan. Camping out for hours to get a coveted front row spot and catch just a little glimpse of the undoubted Badshaah of Bollywood, Shah Rukh Khan. It’s especially endearing to see all the little fans, they are so patient in waiting for their favourite stars. 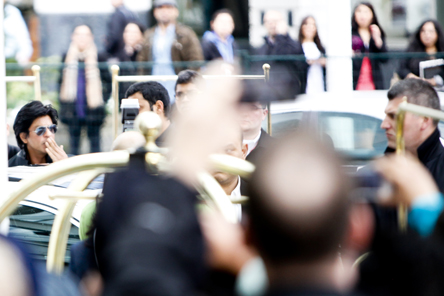 Both Ranbir and Shah Rukh also appeared at the Technical Awards last night, presenting awards to the creative minds behind the films that are loved all over the world.