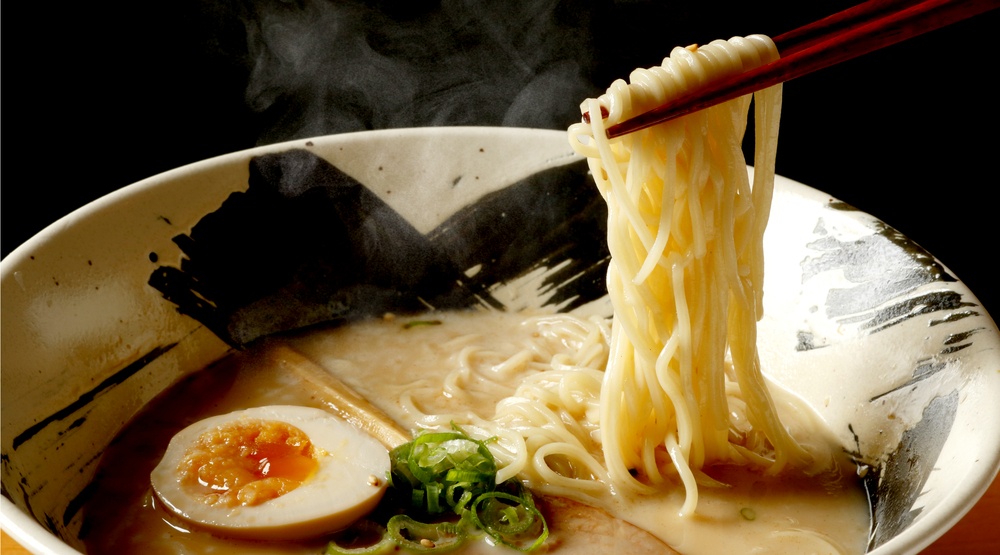 I live in the West End, and a few months back, I noticed tons of new ramen restaurants popping up all over. Now, don’t get me wrong; Robson Street has always been home to loads of noodle joints. There are lots of ESL schools in the area, and here, noodle shops are kept in business by hungry, broke students.

Recently, more ramen spots are opening up, and the few blocks around Robson and Denman are rapidly becoming known as The Ramen District, or RamenVille, if you will. 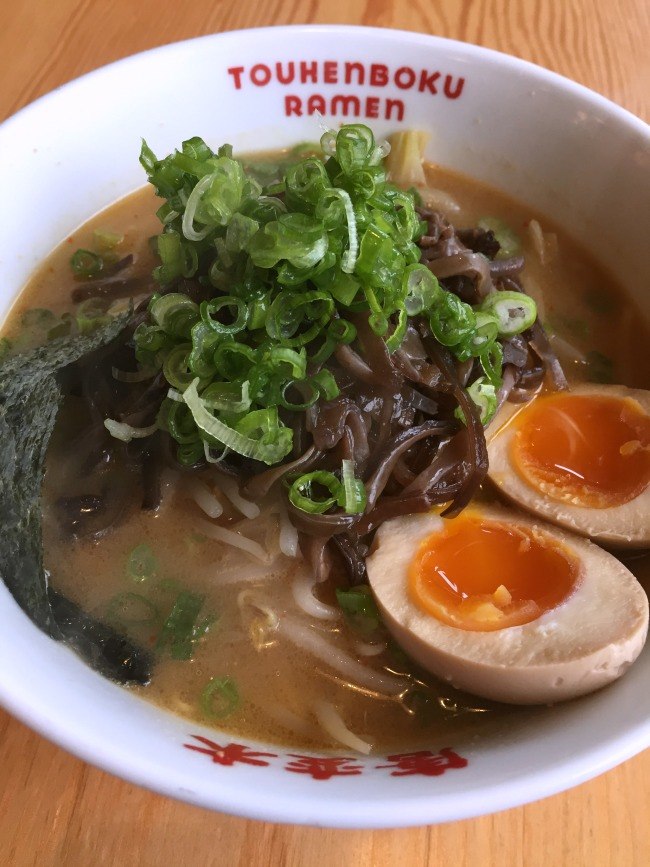 So, here’s your guide to the best noodles to slurp up and down Robson Street in the West End’s “Ramen District.”

The tried and true

It’s rare for there to not be a lineup outside Santouka, and they just opened their second location at Broadway and Cambie. The atmosphere inside is steamy, with huge vats of stock bubbling away on stoves in the back. You will almost assuredly be seated with strangers. Elegant dining this is not.

But the reason for the lineups are Santouka’s tonkotsu pork broth. Cloudy, and full of collagen, each batch takes a minimum of 24 hours to brew up, and it comes in a bowl with thick slices of pork. For a real treat, order pork belly or cheek in your ramen.

Located just across the street from Santouka, Marutama rarely, if ever, has lineups, and I’m not sure why. The room itself is much nicer and more beautifully appointed than Santouka, and you actually get a table here. The service is great.

Instead of pork, they serve chicken broth. Made primarily of off-cuts and offal, it’s cloudy and rich. The thing I like the best about Marutama (which to me is a much better choice all around than Santouka) is the house-made noodles. Not many ramen joints in the city are serving house-made noodles and they make all the difference. 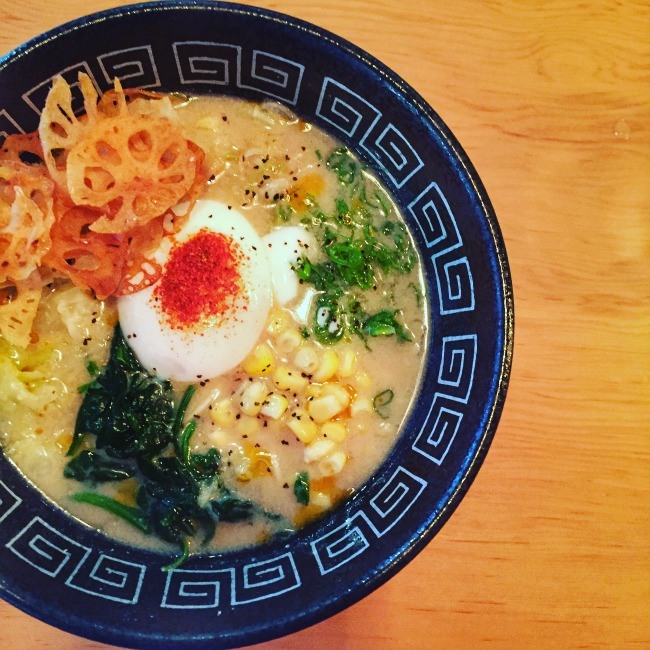 Located just one block off Robson and around the corner from Santouka, The Ramenman is my favourite of the new noodle joints. A tiny alley, there are a few tables in the back, but the space is dominated by a communal table made of a large slab of wood. There is also bar seating at the open kitchen, and the antique décor accents make it charming and warm.

The kitchen is tiny, but they make their own noodles here. The Ramenman is my new favourite because they create a textually interesting bowl of soup. Soup, as a general rule, is pretty one-dimensional when it comes to textures. Soft dominates. But here, the noodles are al dente chewy, and the soup comes topped with interesting crispy elements like paper-thin slices of fried taro root and garlic. I had a vegetarian version, which came with a perfectly sous vide egg and a rich, slightly spicy miso broth. 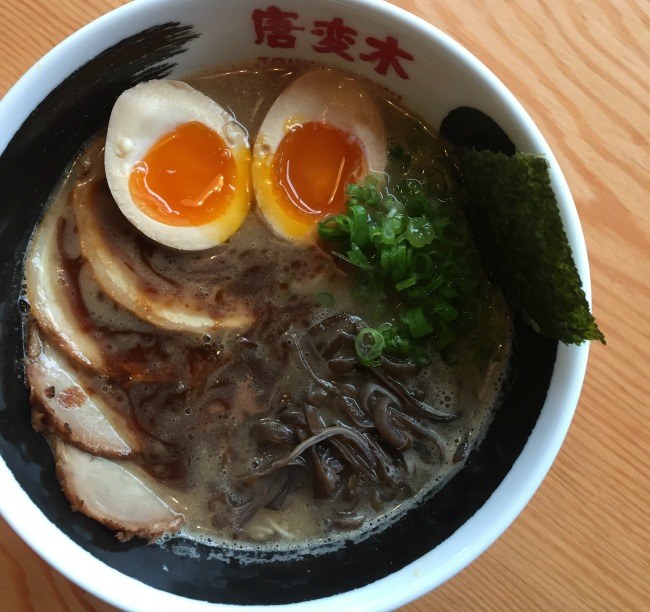 Located on Denman Street, Touhenboku is the largest of the new ramen joints in the ‘hood to open in the last few months, and hails from Toronto. High ceilings and lots of street-facing windows make for a bright space, even on a miserable winter day.

The bowls of ramen are pretty as well; we tried both a vegetarian one with miso broth and  pork belly with black garlic. Here, the default broth is chicken, but you can choose pork for a slight charge. You get your choice of thin or thick noodles, and either pork shoulder, pork belly, or chicken for your meat, or the vegetarian version, which comes with bean sprouts and cloud ear mushrooms.

I found the noodle-to-broth ratio was off here. I actually thought there were too many noodles, and would have liked a little more broth. The egg was a bit overcooked for my liking. I love when the egg yolk is still quite runny and you can stir it into your soup, giving a further richness to the broth. The black garlic sauce is recommended. 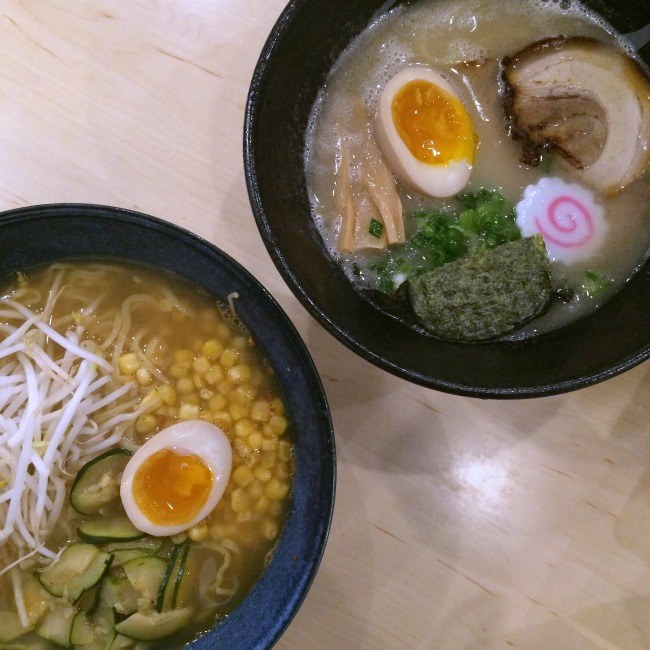 First off, the renovation in this most recently-opened ramen shop is to be commended. I was in it shortly before La Casita (the former tenant) closed, and it was a bit shocking how run down they had allowed the place to get. It’s now clean and fresh, lots of gleaming white tiles with black accents. The space is small with seating for only about 20 or so, but they have a nice patio space which will extend their business in the warmer months.

Despite its updated looks, this was my least favourite of all the new ramen joints. The meat portion wasn’t quite as generous as other places, and my vegetarian ramen wasn’t as interesting in terms of flavours or textures, though the pickles were a unique touch.

Kintaro is always very popular, another place where you’ll often find a line, the place stuffed to the gills with students. There’s also Motomachi Shokudo, just down the street, probably the tiniest of all the ramen joints. You’ll also find Hida Takayama Ramen tucked away upstairs in the Robson Public Market.