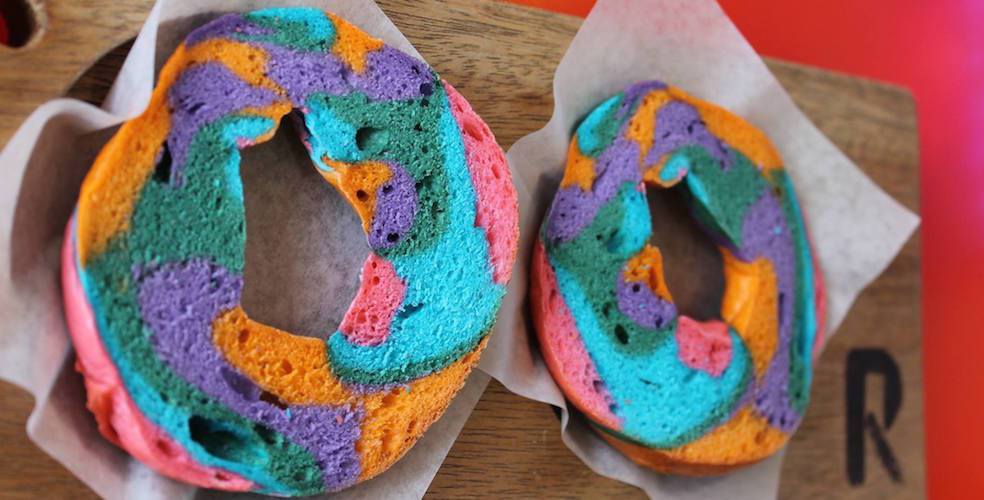 Move over, cronut: The Rainbow Bagel is the next big thing in food mashups, and there is a bagel shop making them in Vancouver.

While the cronut marries a croissant and a donut, and the ramen burger the obvious two foodstuffs, the rainbow bagel is the colourful union of a bagel and…a rainbow!

The rainbow bagel’s trajectory to global fame started in the bastion of cool that is Brooklyn, New York at the hands of Scot Rossillo, founder and chief “bagel artist” of The Bagel Store. The rainbow bagel is a true labour of love, thanks to its multi-layers of coloured dough, twisted together to create a final, dazzling result.

Vancouver’s Rosemary Rocksalt is making rainbow bagels, and Daily Hive talked to the company’s Regional Coach, Scott Robertson about them.

Robertson explains that Rosemary Rocksalt “wanted something to do around our core values,” and since one of those values is centred on a “passion about spreading happiness,” when they realized rainbow bagels were trending, they thought it was the ideal thing for them to do.

Their rainbow bagels are all made in-house, hand rolled, and have a mild orange-raspberry flavour. Their suggested cream cheese pairing is a Creamsicle cream cheese, and, if you ask, they add rainbow sprinkles on top.

A fun twist is that customers are requesting the rainbow bagel as the bread for the shop’s smoked meat sandwiches. “People are loving it with their smoked meat,” says Robertson, wagering that its the balance of slight sweetness from the bagel with the saltiness of the meat that’s hitting all the right tastebuds.

Rosemary Rocksalt makes two dozen rainbow bagels a day at each location that are up for grabs for walk-in customers, but they’ll also take advance phone orders for the colourful bagels. They’re $2.50 apiece, and $4.90 to get the full bagel-creamsicle schmear-sprinkles version. A container of the Creamsicle cream cheese runs $4.95.

Robertson says they’ll be making the rainbow bagels indefinitely, so long as the demand is there.

“Love at first bite” ???? did not know we had rainbow bagels here in Van until I saw @takeoutqueens pic yesterday!! I got so excited I had to come try it today ???? i got mine with a creamsicle flavoured cream cheese which was very tasty, however I found this to be really pricey … over $5 for a bagel with cream cheese ???? #spreadinghappiness

I had no idea Vancouver had rainbow bagels until I found myself at @rosemaryrocksalt today! The Montreal smoked meat made was ???????? #spreadinghappiness