Environment Canada is calling for much needed showers across the Vancouver region Thursday.

A 40 per cent chance of rain is expected for Vancouver today, beginning late this morning around 10 a.m. and into this evening. Temperatures will remain normal with a high of 19°C.

The sun is forecast to return on Friday and continue throughout the next six days.

Metro Vancouver and the South Coast region have seen historically dry weather for the past several months. May was the driest May on record in Vancouver, receiving only 4.2mm of rain out of an average 65mm.

June has also been abnormally dry. The last rainfall recorded at Vancouver International Airport was on Tuesday, June 2 with 6.6mm. The total so far for this month is 6.8mm. The average rainfall for June, according to Environment Canada, is 53.8mm. All in all, the May and June so far have only received 11mm of rain out of a normal 118.8mm.

But Metro Vancouver’s historically driest months are still ahead. July and August typically receive just over 35mm of rain, but predictions for this summer call for continued drier-than-normal conditions.

Because of an El Niño forming in the Pacific, meteorologists are predicting significant warmer than normal temperatures for June, July and August for the West Coast of Canada from southern Vancouver Island upwards to Yukon and as far east as Alberta. 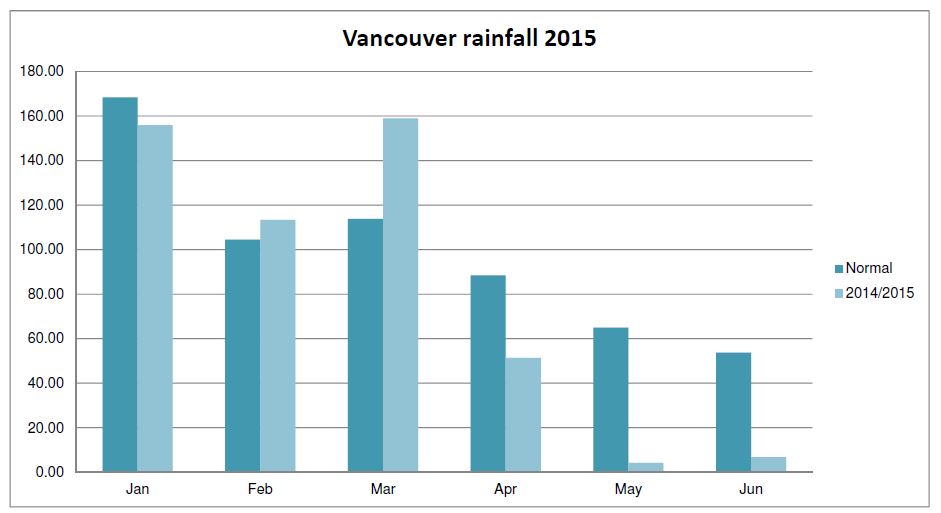