There are so many great organizations in Vancouver that do fantastic community work, and with all the negativity that we get inundated with on a daily basis, it’s nice to hear about some of the positivity going on in our neighbourhoods.

Aprons for Gloves has an annual community event called Restaurant Rumble, where regular Joes and Janes in the restaurant industry drop their aprons and put on boxing gloves to throw down in the name of helping at-risk women and youth.

The event helps raise money for an important program at Eastside Boxing Club. The gym provides free mentorship and training to individuals who may not otherwise have the resources or support to train and participate properly.

I have seen firsthand how training in combat sports can change people of all ages. Boxing teaches discipline, respect, hard work and self-control; it can be a very transformative and powerful thing that can help people fight through life. 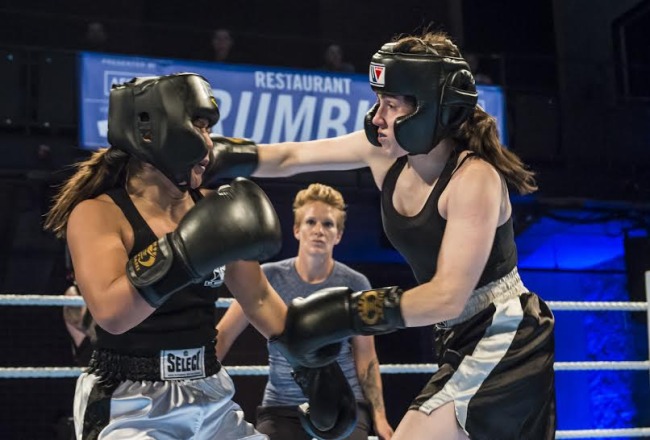 Although most of the contenders that are chosen to compete are women and men in the restaurant industry, one of the participants this year was Claire Allen, who is the senior producer extraordinaire for the talented Simi Sara heard Monday to Friday at 10am to 2pm on CKNW 980AM.

I saw Allen’s Facebook posts about competing, so I felt inclined to ask her some hard-hitting questions about the experience she had last Wednesday night at Restaurant Rumble.

What on earth made you go from the desk to the squared circle?

Claire Allen: A good family friend was one of the people who was behind this program, and he died a couple of years ago. He was such a great guy, and after he passed away I thought a lot more about boxing and what he did for the community. He was really my inspiration behind signing up in order to help continue his legacy in providing a positive place for kids to go. So it was a great opportunity for me to get fit and help out the community.

How hard can it be?

I used to run a lot and did a lot of spin classes. I wanted to become a spinning instructor in my spare time, and I ran the BMO Marathon so I felt I was in fairly good shape. But training for boxing is completely different. It’s a lot of work, and not me just running for fun with my headphones on.

What part of the training did you find the most difficult?

I would say that physically it wasn’t too hard, but being punched really sucks. The actual training and pad work is tough, but you can do it if you set your mind to it and work hard.

But mentally it was tough. Sparring is difficult. Getting into the ring is hard. You get to know everyone you’ve been training with for the last three months and you have to get into the ring and fight them. My opponent was my first friend at Aprons for Gloves, and so it was very strange and we talked about how it was so weird punching someone you actually really like.

Was the process ever frustrating?

Some days sparring would go well and some days it wouldn’t go so well. People would tell me that they felt embarrassed, and there were definite moments where I felt really upset because things didn’t go my way when I sparred. But that’s boxing. It’s really tough mentally and you have to get over yourself.

As you got your hands wrapped and tied the gloves on for your first fight were you nervous?

I felt calm and nervous. I knew my opponent was really tough, and people around me thought it was going to be a really close fight. I knew she liked to charge people, and I had to really focus on my movement and it’s something I should have done a lot more of in my fight. But it’s hard because once you enter the ring, a lot of stuff gets thrown right out the window.

Any regrets? Anything you wish you did differently?

I’m sure there are things I could have done differently, but hindsight is 20/20. When you are in there and people are screaming, you try and do your best. I’m not a professional fighter so I was just happy that I got into the ring and did it. Everyone who competed on the card are champions because ultimately we worked to raise over a $150,000 for Eastside Boxing Club and Aprons for Gloves.

When will we be getting a Claire Allen Rocky-like comeback?

I don’t think I will get back into the ring anytime soon. I really like the training for boxing but I’m not naturally a fighter by any means. I got to do something a lot of people have never done and never will do so it was a big accomplishment.

Any advice if someone is interested in competing in next year’s Restaurant Rumble?

If you are interested in boxing and helping out the community, I would say try out and see if it’s something you want to do. There are definite risks involved with boxing, but at the end of it all I grew so much as a person.

The experience was so transformational that I’m so proud of myself and everyone else who competed because it was such a positive experience. It didn’t matter how beat up my face was. I grew as a person and I have Eastside Boxing Club and Aprons for Gloves to thank for that. 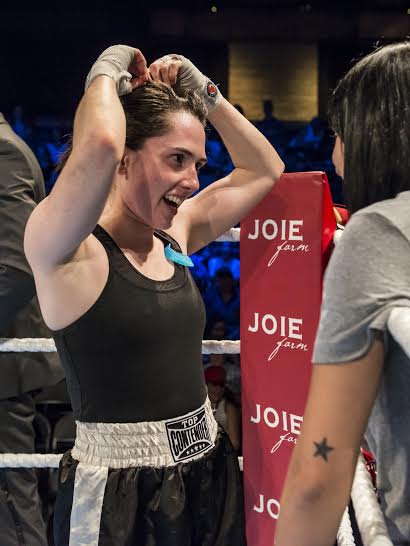 As Claire said, Aprons for Gloves Association had another great sold out and successful Restaurant Rumble event that raised over $150,000 for Eastside Boxing Club so they can continue to provide community outreach through the art of the sweet science.

If you are interested in competing next year check out Aprons for Gloves’ ‘How it works’ page and give it a shot.