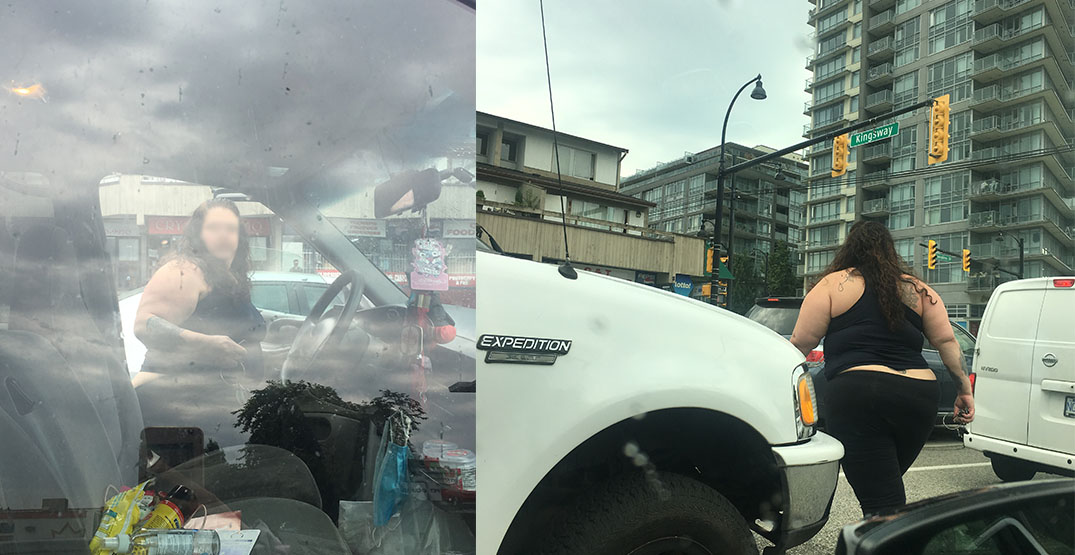 A Vancouver driver says police officers were dismissive of her complaint about a road rage incident where another woman allegedly hit her car while yelling racial slurs.

Maggie Ngai told Daily Hive her car was damaged in the woman’s alleged outburst, and added she’s speaking out because she hopes no one else has the same experience with Vancouver Police Department officers as she did.

The officers allegedly weren’t interested in her dashcam footage, and instead pointed to her previous speeding tickets.

“She’s damaging cars, she’s being violent, she’s saying all these racial slurs. If that’s not serious enough, then I don’t know what’s serious to them,” she told Daily Hive.

The woman in Ngai’s photos, however, alleges Ngai started the confrontation by flipping her the middle finger and “threatening” her.

The two first encountered each other when the woman pulled out from a side street onto E 22nd Avenue Friday afternoon. Ngai was approaching and thought the turn was unsafe, suggesting the woman didn’t do a shoulder check. But the woman said she had enough room and that Ngai was speeding.

Ngai said she shook her head at the woman, but flashed her highbeams to let her in.

From there, Ngai said the two vehicles travelled along the same route toward Kingsway and Nanaimo Street. But the woman characterized the journey as a “chase,” where Ngai followed her and allegedly flipped her the bird.

The woman pointed to her own dashcam footage as evidence, but Daily Hive could not make out any rude gestures by Ngai.

When both drivers were at Kingsway and Nanaimo, the woman allegedly began yelling at Ngai, calling her a “bitch” and using an anti-Asian slur while allegedly hitting her car.

In Ngai’s dashcam footage from the incident, loud thunks can be heard as well as someone yelling what could be the racial slur around the 54-second mark.

The woman told Daily Hive she also had dashcam footage of the verbal altercation which shows she did not use racist insults, but Daily Hive has yet to receive the clip.

The woman admitted getting out of her car was not the best response, but said at the time she wanted to see what Ngai’s problem was.

Ngai alleges the woman called for her to come out of her vehicle, but Ngai stayed put with the doors locked. At five feet tall, Ngai said she felt safer inside her car.

“I don’t know what she wanted in the end,” Ngai said.

Eventually the woman returned to her car, and both of them turned onto 33rd Avenue while Ngai phoned 911.

Ngai tried to follow the woman at first, but the two separated when officers returned Ngai’s call and she pulled over to check the damage on her car. She told Daily Hive there were scratches on the passenger-side door and mirror that went below the paint.

For Ngai, the worst part of the ordeal began when two VPD officers met her on the road.

Instead of asking her if she was okay, Ngai said their first question was whether she had been speeding. The officers also allegedly brought up Ngai’s two previous speeding tickets, and pointed to her “fast car” (a Subaru sedan).

“They were trying to change the narrative so that it was me who instigated everything,” Ngai said. “I didn’t know what to do. I felt like they didn’t care, like they wanted someone to put the blame on.”

When she offered to show the officers her photos and dashcam footage, Ngai said the officers didn’t seem to care.

They also allegedly told her not to contact ICBC, and to buff the scratches out herself. As a student who’s driving a leased car, Ngai didn’t think that was fair. But she is worried about making an ICBC claim without police on her side.

Finally, Ngai said the officer ended the conversation by telling her she was wasting his time.

“The whole interaction was horrible,” Ngai said. “I felt like they created a character profile of me before they stepped out.”

VPD officers visited the other woman in the altercation first, she confirmed to Daily Hive. The officers looked at her dashcam footage, and warned her about the dangers of getting out of her car.

“If I had done anything wrong, the police would have ticketed me,” she said.

VPD spokesperson Sgt. Aaron Roed confirmed police responded to a “possible road rage incident” Friday afternoon where “two drivers did get into a confrontation and had a verbal dispute.”

However, Roed said there was no physical assault. He added officers spoke with both drivers and the incident is under investigation.

Roed did not respond to questions about the officer’s conduct while speaking to Ngai.

Ngai has filed a police complaint, and hopes the force pays attention.