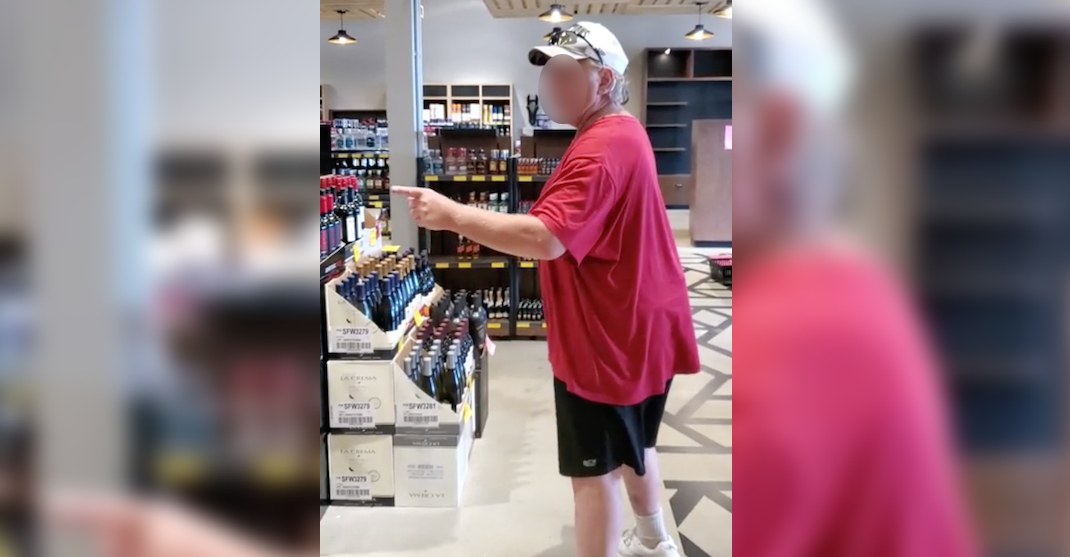 An Edmonton man was captured on camera during a racist rant in an Edmonton liquor store, after he reportedly refused to put on a mask.

In a video shared by CTV News, the man is seen yelling at both an Asian customer and a Sikh man who works for Olympia Liquor on 137 Avenue in Edmonton.

“The moment he entered the store he started yelling, I didn’t even ask him, I was about to ask him, but he didn’t let me ask anything, he just started yelling about the mask thing, saying ‘I’m not going to buy anything if I have to wear it,'” Navdeep Singh, the worker involved in the incident told Daily Hive.

Masks are currently mandatory in all indoor public spaces and vehicles in Edmonton, including retail stores.

The fine for violating the bylaw, which came into effect August 1 and will run to the end of the year, is $100.

“He just kept going on, and there were two customers, and he just got on to them because the customers asked him to stop,” Singh added.

“Why don’t you come to this country and be like everybody else?” says the man.

“I never knew how good this country was until you people moved here, cause Canadians are the nicest people in the f*cking world,” the man yelled.

On his way out, the man continued to shout expletives, before targeting Singh, a Sikh man for his turban and beard.

“Your belief system is not better than ours,” he yells. “Look how stupid that f*cking beard is.”

In Sikhi, the Sikh faith, keeping kesh (or kes) or one’s uncut hair is a practice of faith in the religion.

“That is really sacred to me because of my religion, so that was crossing a line,” said Singh.

Regardless of the man’s behaviour, Singh said he was more concerned about the safety of those in the store.

“It was a bad experience but I wasn’t caring about the incident, I just wanted him to leave the store so he doesn’t cause any harm to other people or to me.”

Watch the full video of the incident below:

Liquor store tirade! “I never knew how good this country was ’til you people moved here!” from r/Edmonton