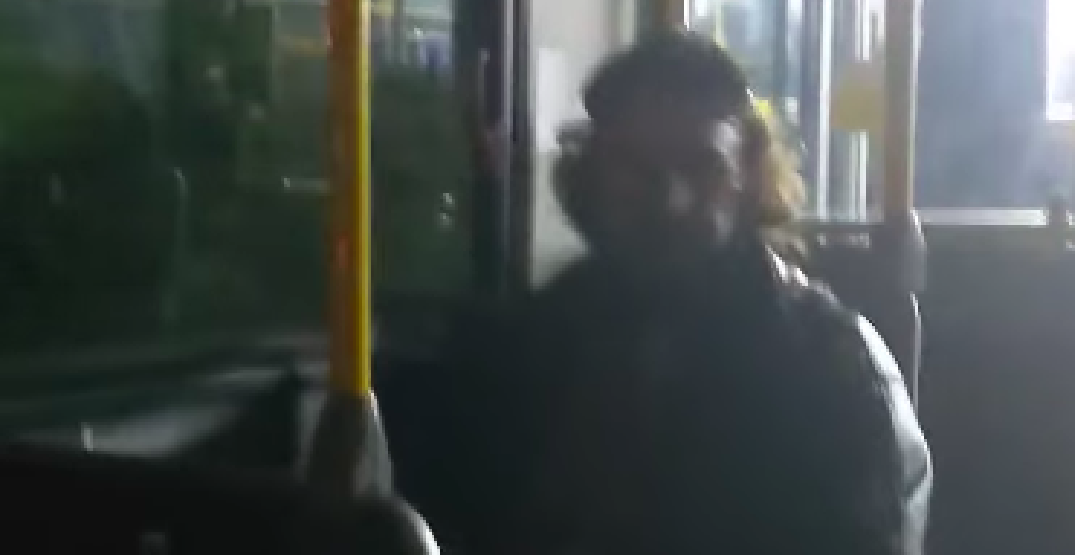 A recent bus ride has left a Burnaby resident feeling “scared and angry” – both by what happened and by what he believes could potentially happen in the future.

Danilo Jimenez Jr. told Daily Hive he was on the #123 Brentwood bus shortly after 7 am last Friday morning when about “two stops in” to his trip, a fellow passenger began hurling insults and racial slurs at him.

“Cursing and telling me I’m a spy from China,” said Jimenez, who is from the Philippines.

Jimenez said at first, he responded to what the guy was saying, telling him that he wasn’t talking to him. Rather than this diffusing the situation, things only escalated.

“He continued to curse me… saying he will rape my daughter and kill me and kill my family,” Jimenez recalled, adding that he was “shaking” and nervous at this point because he was unsure what the man would do next.

Jimenez decided to film the encounter, “for my security and my life… so whatever happens, I have evidence,” he said.

Despite the threatening and insulting language of the passenger, Jimenez said no one on the bus except for the driver stood up for him or intervened.

“The bus driver told the guy that ‘you shouldn’t talk to people like that,'” he said. “I reported it to TransLink the next day.”

While he escaped the incident physically unscathed, Jimenez said the encounter impacted his mental well-being.

“The guy is still out there… I’ve got trauma and fear for my life and for my family,” he said. “I don’t know what will happen to me while on transit, but I need to work for my family to survive here in Canada.”

“The racial rant and words that were used by the man in the video are disgusting and totally unwelcome on transit,” he said. “Passengers using the transit system have the right to travel without fear of harassment.”

Hampton said officers have spoken to Jimenez and are now working to identify the suspect.

In the meantime, Hampton reminded those who witness incidents like these or others on transit that they can discreetly text Metro Vancouver Transit Police in real-time at 87-77-77 or call 604-515-8300.

“The Metro Vancouver Transit Police take all incidents of racism or hate on public transit very seriously,” he added. “This investigation is now being followed up by our General Investigation Unit.”