On Sunday evening, Vancity Buzz published a piece that described a message written on the back of a truck as “racist.” The message read:

“Say no to China crap. They poisoned their own people for profits. Do you think they care about us? Protect ourselves and our economy.

If you’re offended by this, you should not be in this country.”

A good number of the commenters on our Facebook page couldn’t for the life of them see how this is racist. Many, in fact, insisted it was merely fact and lauded the driver for “telling the truth:” 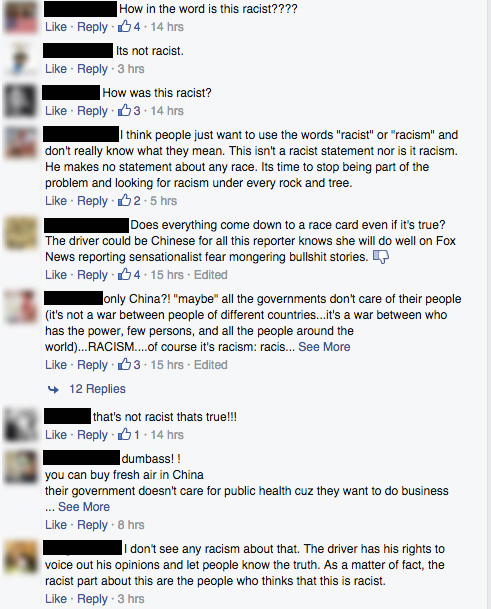 Many readers were playing with semantics and saying it is just xenophobic and not ‘strictly’ racist, but where is the line between xenophobia and racism and why can’t it be both?

When you target a specific country, generalize a whole ethnic population, demonize them, then tell people who are offended by that to leave the country (implication: you are not a real Canadian if you disagree), then you are racist.

This poorly worded message goes way beyond commentary on an economic issue and ventures deeply into prejudicial territory.

Amy Hanser, assistant professor of sociology at the University of British Columbia, specializes in China, culture and markets, and inequality and largely agrees with the assertion that this is both xenophobic and racist.

“When I looked at this, I thought that there was so much stuff wrapped into this message,” Hanser told Vancity Buzz. “So it’s xenophobic for sure, it’s promoting a certain kind of insular nationalism, it’s suggesting all Chinese people are a certain way, which I think definitely falls into the category of racism when you stereotype this group of people in a negative way… and yet it’s also rooted in current events.”

“Some of what this message reflects is also anxieties about changing global economic relationships.”

She referenced foreign investment in Vancouver’s housing market as an example of the changing economic landscape influenced by China.

“All these things get mixed together. There are real concerns that people might feel that get expressed in ways that are not legitimate and not productive, and this is a great example.”

All these different facets come together in one strikingly awful message scrawled on the back of a truck. When faced with our fears, people lash out and fail to contribute to the larger message in a logical, practical, diplomatic manner.

Some commenters say they have seen the driver of the car, and assert that he is of Asian descent, and therefore, how can it be racist when it might be coming from one of the people he’s supposedly targeting?

I posed the question to Hanser during our phone interview: would this still be considered racist coming from someone who might be Chinese?

“Of course someone who’s ethnically Chinese could be racist towards another Chinese person, especially if they’re a native born Canadian and totally identify as Canadian. They might see Chinese people from China as a distinct race.”

The implications wrapped up in one little message can have a huge impact on how we perceive Chinese people. People can say it is an economic issue all they want, but what it comes down to is fear mongering and hinging all of our economic woes on a race of people.

And if this anonymous driver truly believes in saving the economy from an imminent Chinese takeover, he could have just slapped a “buy local” sticker on his bumper. He wanted to be incendiary and to make people angry.

Contributing to the broader conversation this way only serves to perpetuate hate. Those who think this message is an appropriate way to communicate their concerns are part of the problem.