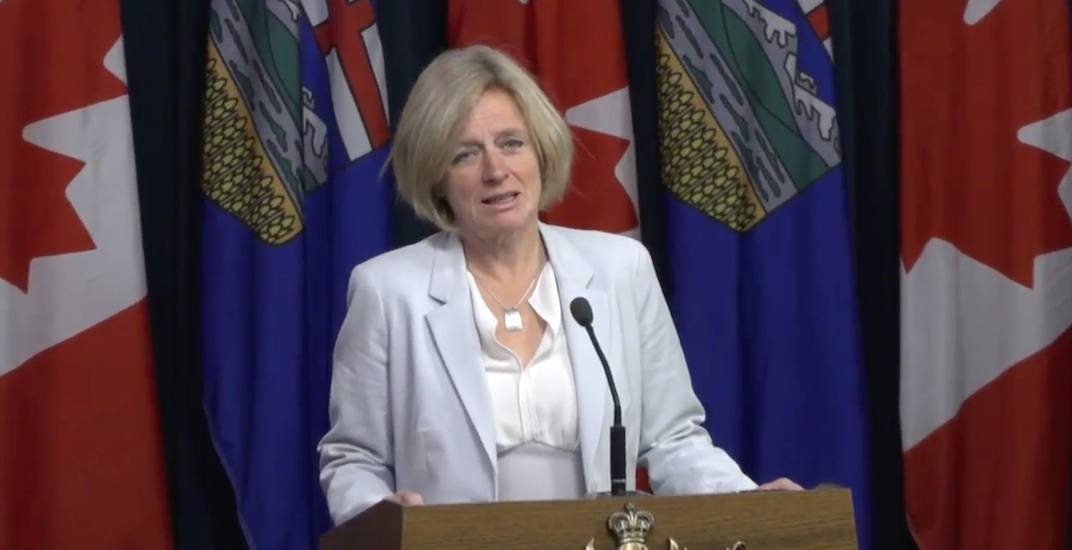 In a press conference shortly after 11 am MDT, Notley said “hatred and extremism have no place in Alberta” and “extremism in all of its forms, in all of its settings, must be rooted out wherever it is seen”.

Five people, including one police officer, are in hospital receiving treatment for multiple injuries.

The incident began when the suspect rammed his car through traffic barricades and into a police officer and police vehicle outside Commonwealth Stadium during a CFL game. He then stabbed the police officer before fleeing the scene.

Several hours later, just before midnight, a U Haul truck fled a police check point and deliberately attempted to strike pedestrians in crosswalks and alleys. Four pedestrians were struck.

An integrated investigation between Edmonton Police and the RCMP has deemed the incident as an act of terror.

Prime Minister Justin Trudeau issued a statement saying this is “another example of the hate that we must remain ever vigilant against.”

“We cannot – and will not – let violent extremism take root in our communities,” he continued. “We know that Canada’s strength comes from our diversity, and we will not be cowed by those who seek to divide us or promote fear. Edmonton is a strong and resilient city, and I am confident that its citizens will support one another to overcome this tragic event.”

The horrific events last night in downtown Edmonton have left us all shocked and angry. Shocked at the indiscriminate cruelty, and angry that someone might target their hatred at places we gather with our friend and families.

Our thoughts and prayers are with the injured and their loved ones, and with everyone who witnessed last night’s violence.

Our first responders are incredible people. Thank you to each and every one of our police officers, paramedics, and firefighters who put their lives on the line to keep us safe.

Thank you also to the women and men who dropped everything to help their fellow Albertans. Your bravery in moments of fear and your compassion in moments of chaos are what is very best about us.

The first question that I asked my officials is, “is the public safe?” They said, “yes”. They believe we are safe, but that doesn’t mean anyone is taking anything for granted. Our police officers and public safety officials remain vigilant as the investigation proceeds.

The provincial role in responding to these horrific acts is to support police services and to support the interaction between municipal authorities and federal authorities. That is exactly what we are doing.

Provincial officials are currently working with the Edmonton Police Service, the RCMP ,and other public safety officials to keep us safe and prosecute the person responsible.

I am confident in the efforts of all of our law enforcement officials to keep our province safe and secure.

Alberta, we must stand together in defence of our loved ones, friends and neighbours, and against anyone who seeks to divide us through fear, hate, and violence.

To that end, I have spoken to Edmonton’s Chief of Police, the Mayor of Edmonton, and Muslim community leaders, and will be speaking with the Prime Minister shortly.

Hatred and extremism have no place in Alberta. Freedom and liberty are core to who we are as Albertans, and that core will never be divided by those who only know fear, violence, and hatred.

In short, there is no space for terrorism in Alberta, and we will do everything possible to stop it in our tracks and in our home.

As we learn more about what happened last night, I encourage everyone to remain vigilant and listen to law enforcement authorities.

Hatred has no place in the province Alberta, it is not who we are. We are in this together, and together we are stronger than any form of hate.